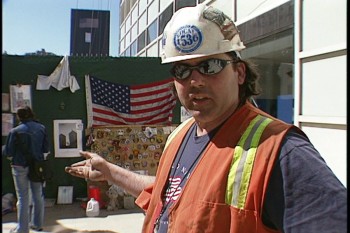 Carpenter Howard Corr became an impromptu curator when he saw people leaving meaningful items on the fence near Ground Zero and felt a responsibility to waterproof and arrange the objects for public display.

Published
Share
Seven years in the making, Objects and Memory explores the search for meaning in the wake of tragedy. Pictured: interviewee and carpenter Howard Corr.

A woman collects dust from a clothing shop near Ground Zero to keep alive the memory of her husband, who was lost on September 11. The shop's proprietor seals off a portion of his store and creates a glassed-in memorial of dust-covered Ralph Lauren sweaters and Levi's jeans. A carpenter at Ground Zero and his wife become impromptu curators, caring for the personal items placed at the site's fence. A firefighter on the scene reveals that his helmet was the one thing he was happy to have returned to him when the day was done.

These stories and more are at the heart of Objects and Memory, a documentary film by Jonathan Fein '72 and filmmaking partner Brian Danitz that will begin airing nationally on September 8, as PBS's commemoration of the seventh anniversary of 9/11. Narrated by actor Frank Langella and using music by Philip Glass, the film follows curators from the New-York Historical Society as they retrieve and preserve material from Ground Zero, and includes interviews with historians, as well as people affected by the tragedy as they discuss the everyday objects that became precious in the wake of the event.

“Ordinary things are transformed into conveyors of identity, emotion and aspiration,” says Fein, whose film also features visits to the Vietnam Veterans Memorial in Washington and the memorial to the Oklahoma City bombing victims.“Psychologists say there are four reasons why people leave objects at sites such as these: to commemorate, to eulogize, to communicate and to apologize. It's a way of triggering memories or expressing feelings. It says, â€˜I was there. I care.'”

Fein says that Objects and Memory is about people's responses to all kinds of traumatic situations, not just 9/11.“People may take their things for granted until they find themselves in a situation where they must grab something that is irreplaceable to them, not because of monetary value.” He hopes audiences will come away from the film with a better appreciation of what it is they care about, what they strive to achieve in their lives, and how they connect with one another.

He also wants viewers to remember not just September 11, but September 12 as well,“when we rose to our better selves with a common purpose.” Says Fein,“We see it time and time again: When there's a catastrophe, everyone helps out, and then it's back to business as usual. We need to remember what it's like to function as a community.” He traces this theme back to his days at Haverford:“That's where I came to understand that we're not alone, and that we have an obligation to help others.”

Fein, who spent seven years working on the film, has received assistance from allies at both Haverford and Bryn Mawr in his fundraising efforts. He counts John Whitehead '43 as a staunch supporter, and credits former Bryn Mawr president Mary Patterson McPherson, now executive officer of the American Philosophical Society and formerly vice president of the Andrew W. Mellon Foundation, with help in acquiring grants.

Fundraising, though, has been a struggleâ€”Fein reports that so far only half the film's budget has been raised.“I've been working for seven years without a salary, using my retirement savings to pay bills,” he says. “I never thought this work would take this long, be this hard, or be so personally costly.  But sometimes you are presented with an opportunity to help people understand their world and their lives, and you know that if you turn away, you would spend the rest of your life regretting it.”

Foundation grants, donations of facilities and services (narrator Frank Langella, for example, offered to work for free after seeing a rough cut of the documentary), have helped, but the project is still in debt, with few prospects of breaking even. (The New-York Historical Society is accepting contributions to the Objects and Memory project.) However, Fein still hopes to raise funds for educational initiatives related to the film.  One, called“Collection and Recollection,” will allow students to further examine the role of material culture in contemporary history. “Teenagers sometimes feel disconnected from history,” he says,“but they can relate to things that were important to people in the past.  Being in the presence of objects that have traveled through time and space help us feel that we are transported to that earlier time.”

Now that PBS is airing Objects and Memory, Fein wants to continue expanding the film's audiences.  DVDs are available on the film's website (http://objectsandmemory.org) and at PBS' site (pbs.org). Screenings, such as the ones held at Haverford during Reunion Weekend 2007 and again in January 2008 at the Alumni Year in the Arts filmmaking panel, will take place throughout the country. He intends to offer presentations, workshops, and curricula derived from the seven years of study leading to the film and the insights gained from its participants.  The film was crafted, says Fein, to encourage discussion of thought-provoking issuesâ€”â€œjust like we used to do at Haverford.”