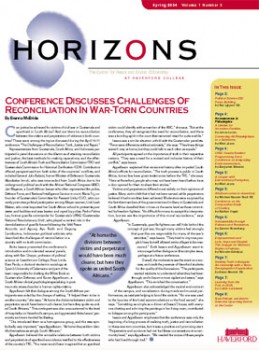 In March, a group of 15 Haverford students, along with Associate Professor of Political Science Anita Isaacs, Assistant Professor of Anthropology and Center for Peace and Global Citizenship Program Director Leslie Dwyer, and Associate Professor of Spanish Roberto Castillo-Sandoval, had the opportunity to spend 10 days in Guatemala. The students were members of Issacs' course“Peace Building: Reintegration, Reconciliation and Reconstruction,” which focuses on peace building in the aftermath of civil war.

As part of their coursework, the students studied Guatemala's armed internal conflict between guerilla groups and the military. Guatemala has a long history with violence, beginning with a coup to overthrow the government in 1954. Although a peace accord was adopted in 1996, it did not solve the country's problems. A second, long-standing conflict between the wealthy landowners and the forced laborers continues to affect Guatemala.“We were trying to understand the political and social situation before we went,” says Jennifer Trowbridge '04.

However, it was not until they arrived in Guatemala that the students could fully grasp the situation.“Doing something like this adds a personal experience to what we've learned,” says Trowbridge. For her, the trip was another milestone in a social justice career. Trowbridge, an anthropology major, has an interest in Latin American studies, and participated in the college's trip to Cuba for the past two years.“This course is extremely beneficial to students because it makes things come alive,” she says.

Trowbridge and her classmates were able to experience various aspects of the violence's aftermath firsthand. They visited a refuge community; Pargue de Paz, the site of a massacre; and the town of Santiago Atitlan, a particularly hard-hit community. There they“got to know the community and talked to people directly involved with the conflict,” according to Trowbridge. They also went to the Ministry of Defense, which put a different perspective on the events. Trowbridge recalls the government workers denied their involvement in the conflict, which contradicted accounts from the victims. The students also visited a forensic anthropology lab and attended an exhumation site, where bodies are removed from hidden graves. These bodies showed evidence of torture, which was intended more to scare the victims' families than to cause physical pain. Trowbridge calls the day spent at the site“fascinating scientifically, yet very hard to deal with.” She is especially proud of their final activity: They brought different communities together to initiate collaboration. Actors portrayed a conflict and each group gave a presentation. Their presence“forced connections” between different groups of people, according to Trowbridge.

The dialogue did not end when they returned to Haverford. For 10 days, the class sponsored Guatemalan students, who attended classes, gave presentations at area schools, and spent a fun-filled day in New York City. On April 16 and 17, the Center for Peace and Global Citizenship sponsored a conference,“The Challenges of Reconciliation: Truth, Justice, and Repair.” The conference provided an opportunity to understand the conflicts better. Participants included members of the military, guerillas, human rights activists, psychologists and anthropologists. Panelists not only from Guatemala, but from South Africa and Indonesia as well, held discussions on the questions raised by the reconciliation process. Among the dilemmas addressed were the steps to reconciliation, the meaning of justice, and the need for reparations.

Trowbridge appreciates the opportunities Haverford gives its students to engage in experiences such as this one. She recognizes that other colleges don't afford their students the same advantages. Overall, she says, both Isaacs' course and the trip to Guatemala were“experiences I'll never forget.”