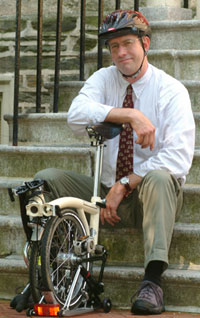 Unlike the majority of Americans, Parker Snowe '79 smiles each time he notices an increase in the price of gasoline.

He hopes the rising cost of gas will encourage more people to take public transportation or ride a bicycle to work like he does. In fact, it was simple economics that influenced Snowe's decision to use a bicycle as his primary means of getting around.

“When I was a student, I did not have enough money for a car,” explains Snowe.“Once my car died, I realized that riding the bicycle was saving me money because I didn't have to worry about car maintenance and repair expenses. Riding a bike is much cheaper per mile than operating a car.”

In 1985, Snowe started riding his bike to classes while attending graduate school at George Washington University. He continued to bike to work in Washington, D.C. from his residence in Takoma Park, Md. The ride was about ten to twelve miles each way.

Every day, Snowe now bikes twelve miles each way to work at The Wharton School at the University of Pennsylvania from his home in Media. As the associate director of international programs, he leads study tours and coordinates all exchange programs for the school. He carefully planned out his route to work, taking back roads friendlier to cyclists. He even stops halfway at a cafÃ© he passes for breakfast.

During breakfast, Snowe can safely leave his bike outside or, with a few quick adjustments, fold it up and carry it inside with him. Because he has a special bike that can fold and collapse into a smaller unit, it can also be carried onto the train to come home during rush hour. Snowe said he does not have a problem spending money to purchase nice biking equipment because he has saved so much from not having a second car in his household.

In addition to saving money, Snowe chooses to ride his bike to work as his daily exercise and his way of preserving the environment.

“I try to drive a car as little as possible and not contribute to air pollution,” says Snowe.

Snowe is also a past president of The Bicycle Coalition of Greater Philadelphia. The coalition strives to educate the community about bicycles as an economical, environmentally friendly and healthy form of transportation. He now serves on the Board of Directors and helps to organize a“bike to work day” each year.

“I'm a bit of a zealot to convince people to let go of their car,” remarks Snowe.“They'll be happy and healthy by the time they get to work. In fact, it's usually the best part of the day and it's sad in a way that it's over before you even get [there].”

Even vacations include bicycling for Snowe. He has taken bicycle tours with his family in places like Belgium and Holland. After his daughter Megan graduates from high school this year, he will bicycle with her from Vienna to Prague.

Snowe admits it is more practical to ride a bike to the train and then take the train to work and notes there are many people who bike to work in the city.

“When it comes to biking in from the suburbs, I'm pretty much the lone one,” he explains. And, that's just fine with him.