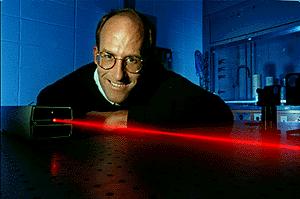 Published
Share
When new assistant professor of chemistry Charles Miller arrived on campus this fall he brought with him not only a distinguished research background in atmospheric chemistry, but a prestigious Camille and Henry Dreyfus Faculty Start-up Grant for Undergraduate Institutions.

The $12,500 grant is awarded annually to new chemistry faculty who not only show potential for significant scientific accomplishments in their field, but also the desire to collaborate with students on research projects that will ultimately advance undergraduate scientific research and chemical education. Only 10 of the Dreyfus awards are made each year.

Miller, who earned a B.S. in chemistry and history at Duke University and a Ph.D. in physical chemistry at the University of California at Berkeley, came to Haverford after working in the Atmospheric Kinetics and Photochemistry Group at Caltech's NASA Jet Propulsion Laboratory in Pasadena, California. Despite the sunny skies and balmy temperatures of Southern California, he said he was drawn to a teaching career at a smaller educational institution, and that coming to Haverford was a logical decision.

"I've always enjoyed learning and I hope to transfer my enthusiasm to other people by educating them," Miller said, noting he was attracted to Haverford because of the quality of its students and the potential to interact with the students in such a close-knit educational community.

"Those interpersonal relationships are much harder to develop at large research institutions," he said.

The start-up grant will be used at Haverford to purchase semiconductor diode lasers - the same type of lasers found in CD players and other household technology. The new equipment will enable Miller and his students to perform high-resolution spectroscopy, an analysis technique that scans the wavelength of lasers to map out the energy levels at which molecules absorb light. The ultimate goal of this research is to determine relationships between molecular structure and chemical reactivity for molecules important in atmospheric ozone depletion chemistry.

Haverford senior Danielle Thesier currently works with Miller, and they are particularly interested in free radicals - a class of molecules which contain unpaired electrons - and the rapid chemical reactions which they undergo. Although free radicals are sparse in our atmosphere at ground level, Miller said they are abundant in the stratosphere where temperatures can dip as low as minus 100 degrees centigrade and atmospheric pressure is 100 times lower than at the earth's surface. Such research is vital to environmental studies, Miller said. He noted the 1995 Nobel Prize in Chemistry was awarded for fundamental studies in how the highly reactive nature of free radicals, particularly chlorine and bromine oxides, caused ozone depletion in the earth's upper atmosphere.

This year Miller and his students plan to employ an experimental technique that will allow them to obtain effective absorption path lengths of several miles within a cell only 12 inches long.

"We introduce the laser light into a cell with highly reflective mirrors on either end," Miller explained. "The light becomes 'trapped' in the cell and continually retraces its path back and forth. Since the speed of light is 186,000 miles per second, it takes only a few millionths of a second for it to travel on our tabletop a distance equivalent to that from Haverford to Bryn Mawr or Villanova."