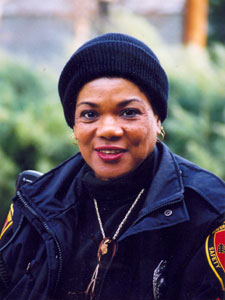 Maria Johnson never worked in homicide, let alone tracked down a serial killer. But her years with the Philadelphia police force provided enough material, if not actual experience, for her new endeavor. This fall, the former police corporal published a detective story about a young female police lieutenant assigned to solve a series of murders.

Titled Dead in Fairmount Park, Johnson's murder mystery (written under her maiden name, Watson,) centers around the death of three men whose mutilated bodies are found in Philadelphia's Fairmount Park. Michelle Burns, a young African American police lieutenant relegated to filing reports for her colleagues in the homicide unit, is finally given the chance to command an investigative team and is assigned to the case.

Like Lieutenant Burns, Johnson is African American, and she's experienced the challenges many women have faced during their careers. Born in Philadelphia, Johnson attended Simon Gratz High School and for six years was a nurse's aid in one of the city hospitals. After graduating from the police academy, the author and her identical twin sister joined Philadelphia's police department in 1976 and were among the first 100 women assigned to uniform patrol.

Conditions for female officers weren't particularly good in the early 1970s, according to Johnson. Women, she says, were only paired with other women, promotions were rare, and their assignments were limited to one division which handled crimes only committed by juveniles. Eventually, women were given more opportunities for promotions and other units were opened up to them. Over the course of her 20 years on the force, Johnson was a patrol officer, an undercover officer in narcotics, and she was assigned to the sex crimes and gang units of the juvenile aid division.

Three years ago, she came out of retirement and joined Haverford College's Office of Safety and Security where she works the midnight-to-8 a.m. shift and is one of the instructors for the department's Rape Aggression Defense course. In September when her book first appeared on iUniverse.com and Barnes and Noble.com, Johnson, 52, became a great grandmother to identical twin boys.

During the two years that Johnson worked on Dead in Fairmount Park, she was never discouraged despite rejections from agents and publishers.“I believe a person can achieve anything they want,” says Johnson. She already is working on her next book.

Dead in Fairmount Park is available in the Haverford College bookstore or through Barnes and Noble online at http://www.barnesandnoble.com/