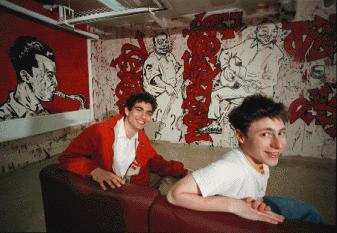 Published
Share
The basement lounge of Gummere dormitory, once rather nondescript, now has walls that are filled with color and life...actually the lives of 12 musicians.

Thanks to the creativity and artwork of students, Nathaniel Friedman '00 and Jacob Weinstein '01, the nearly 800 square-feet of walls in the room are covered with several murals portraying famous and not-so-famous artists, including delta blues singer and guitarist, Charlie Patton; jazz saxophonist,Warne Marsh; Willie Dixon, a blues bassist, songwriter and producer; Muddy Waters and the core members of Invisibl Skratch Piklz, a San Francisco Bay area deejay collective best known for their jazz-like improvisations.

While it took the two friends nearly 48 hours, working nights and days, in order to complete the project by the end of spring break, they are nonchalant about the enormity of their efforts.

"Basically I picked twelve of my favorite musicians and musical groups, and then we put either pictorial or verbal representations of them on the wall," explains Friedman.

Friedman originated the idea of the mural, and Weinstein, who has always wanted to create something on a wall, drew most of the musicians based on the best pictures they could find of the artists.

Neither student is a music major, although Friedman became fascinated with the lives of musicians, particularly less "mainstream" artists after taking guitar lessons when he was younger. "Anyone who sounded interesting on paper, I made a point of hearing their music," says Friedman. This summer Nathaniel has a chance to learn what it takes to be a music critic as he is participating in an internship with Francis Davis in Philadelphia.
--Emily Kelton'99