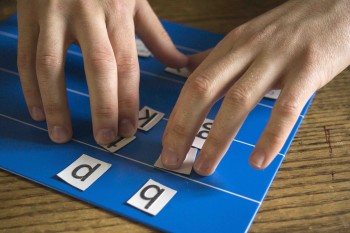 When Assistant Professor of Linguistics Brook Danielle Lillehaugen learned that Daniel Gillen '16, who is blind, planned to take her class in Spring 2013, Lillehaugen immediately began thinking about ways to allow his full participation without altering her interactive style of teaching. Collaborating with Haverford's Office of Disability Services, linguistic students, and Gillen, she came up with a novel solution: a tactile International Phonetic Alphabet (IPA) magnet-board system.

During her “Phonetics and Phonology” class at Haverford College, Assistant Professor of Linguistics Brook Danielle Lillehaugen often strays from her prepared lecture. She might digress to address questions or go with the flow of an impromptu discussion, all while covering the board with complex rules about the sounds of the world’s languages.

When she learned that Daniel Gillen ’16, who is blind, planned to take her class in Spring 2013, Lillehaugen immediately began thinking about ways to allow his full participation without altering her interactive style of teaching. Collaborating with Haverford’s Office of Disability Services, linguistic students, and Gillen, she came up with a novel solution: a tactile International Phonetic Alphabet (IPA) magnet-board system.

“I wanted whatever is on the chalkboard to be accessible to everyone, this stuff that I can’t predict ahead of time, that happens in the moment and that I can’t necessarily all say out loud,” Lillehaugen says. “I didn’t want to fall back on just lecturing. That’s not how I teach.’

While not an expert on learning styles—her research is on the Zapotec language of Mexico—Lillehaugen was the lead author of a paper on the tactile board in the journal Language, which came out late last year. Gillen, 20, a physics major with a music minor who is from New York City; Gabriela Echavarría Moats, coordinator of accommodations in the Office of Disability Services, and Elizabeth Peters ’15 and Rebecca Schwartz ’13, both linguistics majors and class assistants who helped tweak the board through the semester, also were authors.

The system is inexpensive and ingeniously simple. Two plastic sectioned craft bins are filled with embossed small tiles, which can be arranged and manipulated on a magnetic board the size of a sheet of notebook paper. Through Disability Services, Lillehaugan was able to get phonemes and various linguistic terms that govern grammar printed in raised type on sticker paper. The 200 or so stickers were applied to magnets. Gillen could feel the tiles with his fingers and then decipher them, and sighted classmates could see and read them. The tiles are similar to the popular refrigerator poetry magnets.

The beauty of the system is that it can be used by anyone, both sighted and not. “It’s accessible visually and tactically,” Lillehaugen says. “So now it’s this shared work space. You can solve a problem and move things around in a way that can communicate with lots of people. … If Daniel or Daniel’s team is working on a problem, I can offer feedback in a way that’s accessible to everyone.”

Overall, Gillen was pleased with the tactile board system. Peters and Schwartz arranged the magnetic tiles on the board to reflect the equations and other information on the chalkboard. The board also was used for in-class worksheets.

“I was able to right away notice exactly what was being displayed on the board when everybody else would see it in front of their eyes,” Gillen says. “This is to say, it was distinct from having access to a document, which does not get updated in real-time.”

Peters, 22, who hails from Cheshire, Conn., says the board served its function, though it was not perfect. For example, it was discovered that the box didn’t have enough of certain letters over the course of the semester. And in hindsight it makes sense to add Braille to the embossed tiles. Sometimes, Peters says, it was hard to keep up with the information written on the board. And the system takes up a lot of desk space.

“It was always a work in process, and there are still some kinks, but in general having the board made it significantly easier to explain spatial concepts,” she says. “Daniel’s use of the board during class meant that he could participate fully in small group exercises.”

After the paper came out, Lillehaugen received emails asking about borrowing the system. Recently, it became available for lending through Magill Library to other students and instructors as well as to other colleges. Currently, Haverford has four students who use accommodations because of vision impairments, according to Moats.

“I thought it was phenomenally creative,” she says. “We wish all professors were like that.”

The tactile IPA magnet set can now be borrowed from Haverford College Library through Interlibrary Loan.