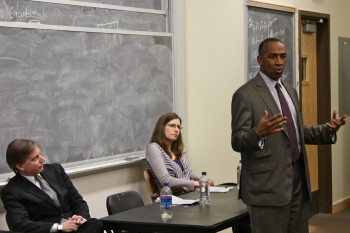 Published
Share
Haverford House fellow Emily Bock '11, with support from the CPGC, organized a discussion of the criminal justice system. Among the panelists: Tyrone Werts, whose life sentence for murder was commuted after he spent 36 years in prison.

A standing-room only audience gathered in a lecture room in Hilles Hall on Wednesday night for a panel discussion organized by Haverford House fellow Emily Bock '11. The event, titled“Life After Life: Reflections on Justice,” was sponsored by the Center for Peace and Global Citizenship (CPGC) and featured Tyrone Werts, who spent much of his adult life in prison on a murder charge.

With self-deprecating humor and compelling honesty, Werts told his story: how he hustled on the streets as a young man, his life sentence for being an accomplice to a North Philadelphia murder, his subsequent incarceration at Graterford prison, and his ultimate decision to change his life from the inside. Werts told of an encounter with a motivational speaker who visited Graterford during his early years in prison and the effect it had on him:“I left my cell the next morning, and I let go of all that anger and all that bitterness. I resolved that I would not let the prison take my human dignity.”

Werts' road out of prison was a long one, enduring two delays in his commutation appeal while his case was“taken under advisement” first once, then a second time. But during the 36 years Werts spent at Graterford, he earned a bachelor's degree from Villanova University (two of his Villanova professors were in attendance on Wednesday night), worked as a tutor to help others earn their GEDs, became heavily involved with Temple University's nationally renowned Inside-Out Prison Exchange Program, and established the Lifers' Public Safety Initiative (PSI) with other incarcerated men.

Recalling the day his sentence was commuted in 2010, and he was freed, Werts said:“It was the most bittersweet moment of my life. I shook the hands of the other lifers, men I'd known longer than my own family, brilliant men, and I knew they were going to die in prison.”

Pennsylvania's“life means life” policy, which mandates a life without parole sentence for defendants convicted of first and second degree murder, was one of the evening's most heavily discussed topics. Paul J. Hetznecker, a Philadelphia-based civil rights and criminal defense attorney, stressed the importance of the defense attorney as the last line of defense for the constitution, particularly when juries are denied the information that a second degree murder guilty verdict carries a guaranteed life sentence.

Barb Toews, a restorative justice practitioner/educator who has worked closely with Werts for more than ten years, brought a rich theoretical framework to the discussion, urging the audience not to forget the role of the victims in any conversation about justice.“The justice system we have now is like a boxing match,” said Toews,“both offender and victim come away bloodied and beaten. There's no real winner.”

Toews also facilitates Haverford students' participation in the Inside/Out Exchange. In fact it was her own experience in Inside/Out that moved Bock to organize the“Life After Life” event.“After taking the Inside/Out course with Barb Toews and working with a wonderful group of men doing restorative justice work at SCI-Graterford,” said Bock,“I felt that Haverford students needed an opportunity to think about the criminal justice system. I knew Mr. Werts had an incredible story, and believed his experience would be a great way to get people thinking about what happens every day in the American criminal justice system.”

A program of the CPGC, Haverford House is an urban post-graduate program for community living and service in Philadelphia, and helps to strengthens Haverford College's campus connections with the city.