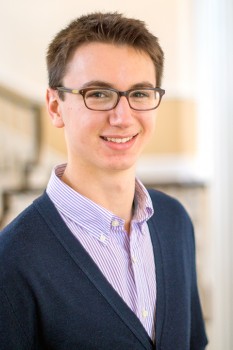 The physics and astronomy major will conduct research on theoretical astrophysics in Germany.

Lee Rosenthal '15 plans to spend his summer post graduation gazing at the stars. But this is no lazy, dreamy break. The recipient of a 2015-16 Fulbright U.S. Student Award to Germany plans to conduct research in theoretical astrophysics.

The physics and astronomy double major with a minor in philosophy will work at the Heidelberg Institute for Theoretical Studies (HITS) with Volker Springel, who leads the theoretical astrophysics group there and also is a professor of astronomy at Heidelberg University. â€œI plan to use computational simulations to study how galaxies form and evolve,” says Rosenthal, 21, of Westfield, N.J. He also wants to engage with the astronomy-loving public through outreach.

Rosenthal will collaborate with HITS' astrophysicists to explore the effect of including magnetic fields in simulations of galaxy mergers.“Ionized interstellar gas becomes magnetized when in motion, which influences its own behavior and that of stars,” he wrote in his application.“In the past decade, observations have shown that the density of energy stored in galactic magnetic fields is roughly the same as the density of thermal energy stored in gas. This relative strength of galactic magnetic fields makes them principal actors in a galaxy's entire lifeâ€”how it is born, creates stars, and behaves when it interacts with a neighbor.”

The Fulbright is an ideal way to spend a year with an international research group doing cutting-edge research, says Rosenthal, who also is pursuing graduate studies in astrophysics at the California Institute of Technology when he returns.“I hope to both expand my knowledge and activity in the study of astrophysics and grow personally by exploring a country and culture that is new to me,” he says.

Rosenthal is especially looking forward to discovering Heidelberg and its rich cultural history, he says.“It looks like a beautiful town with a lot of great art museums, music, and history.”