Kim and Tritton Halls are Dedicated 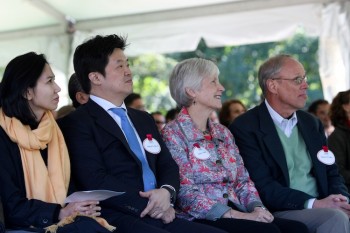 Tom Tritton (far right) and Michael B. Kim '85 (second from left) at the dorm dedication ceremony for Kim and Tritton Halls.

Published
Share
The festive open-air dedication ceremony brought together Haverford presidents past, present and future; the lead donors, and a crowd of supporters to celebrate the College's striking new residence halls.

Haverford presidents past, present and future, along with board members, alumni supporters, students, faculty and staff, gathered to celebrate Haverford's new Kim and Tritton dormitories on Saturday, October 13. The crisp, sunny fall day offered perfect weather for the outdoor dedication ceremony, which was held in an open-air tent erected on the earthen berm that connects the two buildings. Speakers included Interim President Joanne V. Creighton, Board of Managers Co-Chair Howard Lutnick '83, former Haverford President Tom Tritton (for whom Tritton Hall was named), Jim Friedman '67, chair of the Board's Property Committee and Dylan Lazovik '12, who served on the New Dorm Steering Committee. All were full of praise for the new buildings and for donors Steven Jaharis '82 and Michael B. Kim '85 whose generous gifts made the project possible.

The new dormitories were set in motion when the Jaharis Family Foundation set up a $10 million challenge grant in 2009. Kim, who lives in Seoul, South Korea, and is a founding partner of MBK Partners, one of Asia's largest private equity firms, contributed $7.5 million to matching the original gift through his MBK Educational Foundation. These gifts gave Haverford the funding necessary to move forward with construction.

The speeches at the dedication ceremony noted the uniquely collaborative process of planning the halls, which involved much student input (realized in aspects of the buildings like storage cubbies in the bathrooms, lots of natural light and kitchenettes), and the effective leadership that pushed progress on the dorms forward.

The cause for celebration is great, said President Creighton, who noted that Kim (named for Michael Kim's father, Ki Yong Kim) and Tritton are the first new residence halls constructed at Haverford in 44 years. Creighton shared positive student feedback on the residences and her personal experience of seeing the dorms project progress so quickly in her term as interim president.

“For me, who arrived a year ago and who remembers the parking lot that was here, it has been a special pleasure, a time-lapse video, to see how quickly and smoothly they have taken shape, been completed, been colonized and celebrated by students,” she said.“You lucky residents of Kim and Tritton, we hope these new homes help you to experience Haverford at its fullest.”

Lutnick, the Board co-chair, captured the enthusiasm palpable in the crowd with his remarks.“There is nothing more exciting than that first minute when you're about to walk into a new house,” he said, adding,“We can all remember back when we first went to college and that excitement â€¦ it's extraordinary, and these two dorms really express that excitement.”

Tritton's speech delved into his friendships with both Kim and Jaharis, relating how he first met each donor and describing how grateful he is for his relationship with both men.“The really cool thing about these two buildings is to think about the generations of future Fords who will live there and learn there,” Tritton said,“Maybe a few of them will rise to the level of character of Steve and Michael. That, alone, should make you feel really good about the future of humanity.”

In his remarks, Lazovik lauded the level of student involvement in the planning process for the dorms and praised the cutting-edge design (by Tod Williams Billie Tsien Architects), which aims to make the buildings almost disappear into the landscape.“Haverford, never aspiring to be a typical liberal arts college, sought out an architectural vision to match the unique institutional character that we have here,” he said, adding that the buildings' clean lines and generous common spaces, meant to foster a sense of community,“evoke the very ethos of Haverford College.”

After hearing from the speakers, event attendees followed Kim and Jaharis and their families, as well as Tritton and his wife, Louise, to the entrances of the two dorms for the official ribbon-cutting. Following that, small groups embarked on brief informal tours of the new facilities, led by students who live in the dorms, members of the architecture firm, the main contractor W.S. Cumby and representatives from Haverford Facilities. For many, it was the first time seeing the finished residence halls.

Workers were making tweaks and putting finishing touches on the entire area as recently as the week prior to the ceremony, including planting 32 trees, 96 shrubs and over 7,000 groundcovers, grasses, vines and other perennials on the berm and its banks, and along the terraces and pathways that link the buildings.

Located just across the road from Whitehead Campus Center on the spot where the Orchard Parking lot used to be, the new dark brick buildings each contain 80 single rooms. The residence halls feature an interior courtyard, two common rooms (each with a kitchenette and wall-mounted TV) and a study room on each floor. Construction plans called for the addition of a third building, to stand behind the berm, between Kim and Tritton. With more funding, these plans will be realized in future years.

Touring the new residences, Steven Jaharis, who practices family medicine in Chicago, was impressed with the final product that resulted from the Jaharis Family Foundation's initial gift.“I'm blown away,” he said.“Being here, I'm so happy we were able to do two dorms at the same time.”

Notably, the ceremony brought together four presidents of the college: Former Presidents Tom Tritton and Steve Emerson, Interim President Joanne Creighton and 14th President Dan Weiss, who will begin his term at Haverford in July.“This whole complex really resonates with Haverford's values,” Weiss said,“And it has been a real joy to meet people today and see the community in action.”

The event concluded with lunch in Founders Hall. Board of Managers Co-Chair Cathy Koshland '72 greeted the crowd as they took their seats. In her remarks, Koshland pointed out a notable historical fact: Kim Hall is the first building on Haverford's campus to bear an Asian name.

“This is truly a watershed moment,” she said,“It reflects our changing student body and the globalization of our mission.”

For full gallery of photos of the dedication, check out the Haverblog.