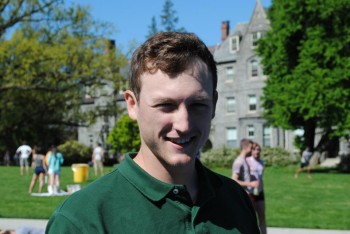 The Fulbright funding will allow Goff to spend a year working in a neuroscience lab at the University of Bergen, in Norway.

Kevin Goff '13 knows exactly what he will be doing after his May graduation. He'll be heading to the city of Bergen in Norway, thanks to a Fulbright U.S. Student Award. The chemistry major will spend a year working in the neuroscience lab of Dr. Clive Bramham at the University of Bergen, who was the first person he contacted when he began developing his Fulbright application last fall.

"For the Fulbright research grant, you have to design a specific project proposal and find a host institution that will be able to support you during your stay," says Goff, a native of West Palm Beach, Florida. "Dr. Bramham was very enthusiastic and helped me formulate a project based on the research done in his lab. I was expecting the search for a host institution to be the hard part, but I think I got lucky in finding such a great group in such an ideal location."

For his senior thesis, Goff, who played on Haverford's championship varsity baseball team, studied T cell development in the lab of Professor of Biology Jenni Punt. "Specifically, I have been looking at the role of reactive oxygen species, or ROS—better known as "free radicals—in inducing both proliferation and apoptosis, which is cell death," Goff says. "It's been a fantastic year, and I will miss working in Jenni's lab."

After Norway, Goff plans to apply to an M.D./Ph.D. program to study neuroscience. "I like the idea of getting a dual degree because it will allow me to do pretty much whatever I want," he says. "I plan to continue to do research as a career, but I look forward to the opportunity to also work in a clinical setting, and to teach at the college level."