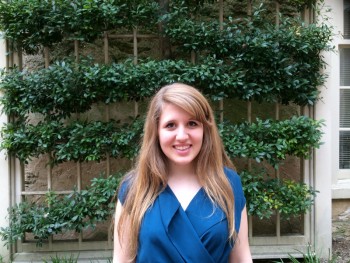 The biology major and neuroscience minor, who plans to pursue a Ph.D. in neurogenetics after Haverford, is one of 283 students from across the country chosen for the premier undergraduate science scholarship of its kind.

Juliette Rando '15, a biology major and neuroscience minor, has been awarded a Goldwater Scholarship. The program, which honors Senator Barry M. Goldwater and is the premier undergraduate award of its kind, was designed to encourage outstanding students to pursue careers in the natural sciences, engineering, and mathematics.

"I am very grateful for [my Haverford professors] Phil Meneely, Judy Owen, Rob Fairman, [and instructor] Kate Heston,” says Rando. "Each of them has always been so kind to me and so invested in my learning throughout my time here. They've made me extremely happy to be a bio major at Haverford."

This past year, she has worked in Visiting Assistant Professor of Biology Mike Grider's neuroscience lab, studying neuroprotection and neuroplasticity in rat models of ischemic stroke, meaning, she says, "I get to tickle a lot of rats.”

“It's been really interesting for me to experience research with such relevant clinical applications,” says Rando, who also spent the past two summers working in the neurogenetics lab of the New England Primate Research Center.

Rando is one of the 283 Goldwater Scholars selected this year on the basis of their academic merit from a field of 1,166 students nominated by faculties of colleges and universities across the country. Goldwater Scholarships cover the cost of tuition, fees, books, and room and board up to a maximum of $7,500 a year.

Rando will return to Haverford in the fall for her senior year, and plans to do here senior thesis research with Visiting Assistant Professor of Biology Justine Melo, who studies pathogen-detection in the roundworm C. elegans. Rando's future plans include pursuing a Ph.D. in neurogenetics in the hopes of eventually becoming a professor.

“I've always been a science kid,” says Rando. "When I was little, I was very overcome by the idea of evolution, and liked to think about it all the time. Back then I thought I would study child development to become a psychologist and help children who had experienced trauma. But when I interned in a genetics lab in high school, I became increasingly interested in molecular biology, particularly genetics and neuroscience. I chose Haverford because of its incredible biology department, which strongly emphasizes molecular biology, and because I thought I would be able to interact closely with my professors—and I was right!"