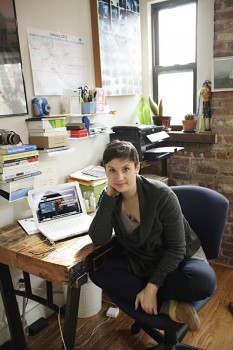 That's how it was for Emily Best '02, who got the idea for Seed&Spark, a new“crowdfunding” and digital distribution platform for independent film, when a film she was working on nearly went south before shooting had even begun.

Best was making her first foray into producing with the independent film Like the Water, the story of a grieving young journalist returning to her hometown in Maine to give a eulogy for a dead friend. The project had come about after Best, an actress and singer, was cast in an off-Broadway production of Hedda Gabler and met an intrepid group of women who decided at the show's close that they wanted to work together again. Among them was actress Caitlin FitzGerald, who had recently wrapped filming on indie director Ed Burns' Newlyweds. Over drinks one night, Best recalls,“Caitlin would convince us all, thanks to Eddie's stripped-down filmmaking style, that â€˜filmmaking is easy.' ”

But two months before Like the Water was set to shootâ€” during the fleeting Maine summer that was central to the scriptâ€”Best and her colleagues found they were facing a $20,000 shortfall.

They decided to try crowdfunding, a rapidly evolving trend in financing the arts (and other projects), in which fundraisers solicit small amounts of money from the general public instead of, or in addition to, larger sums from professional investors and wealthy donors. Pioneering sites like Indiegogo and Kickstarter were just getting started, and worked from a model not unlike a PBS telethon, in which cash donations toward a stated goal are rewarded with a hierarchy of thank-you gifts. Best's team decided to approach it from a different angle, and created an online“wedding registry” for their film, listing every item they neededâ€”from camera and car rentals to bug spray and lobstersâ€”along with its cost and a pithy description of its purpose.“For â€˜incentives,' we offered what we could afford: a thankyou in the credits,” says Best.“We sent this list out to everyone we knew.”

Within 30 days, they had collected all the money they needed and more.

Best took what she learned and turned it into Seed&Spark. The platform, which launched in December at www.seedandspark.com, has already had dozens of independent films sign on, and has garnered coverage from Forbes and PBS, and a mention on influential film producer Ted Hope's blog in his list of“16 Really Good Things in the Indie Film Biz in 2012.”

Best sees Seed&Spark as part of a larger movement to put independence back into independent filmmaking. At this year's Sundance Film Festival, in January, Best and her partners hosted an“Innovators Brunch” along with two other New York-based companies: Dogfish Accelerator, a start-up that provides seed funding, mentorship, office space, training and other programs for independent film producers, and Nice Dissolve, a postproduction facility focused on making independent film production more affordable. As well as being a forum for new ideas, the Sundance event also heralded the launch of #StayIndie (www.stayindiefilm.com), an online community sponsored by the three companies to promote best practices in independent film production.

With hundreds of millions of dollars already pouring through other crowdfunding sites, Best believes that the viewing public has proved it's ready and willing to put more skin in the game.“I hope, honestly, that crowdfunding becomes one of the primary ways that independent films get financed, because I think it means you're going to see a lot more films that really matter to the communities they're being made for, as opposed to films that are being made based on market research.”

After graduating from Haverford with a degree in anthropology, Best studied jazz singing in Barcelona, then switched to cooking after she injured her vocal cords. Following a move to California, she found herself running“an enormous and unwieldy floating restaurant.” After several years of that, she decided to join her father in New York, where she shuttled between his corporate strategic planning firm, Best Partnersâ€”for which she developed projects in renewable energies, financial services and emerging marketsâ€”and the downtown theater scene, where she produced and performed in projects like Hedda.

Now, with Seed&Spark, Best, who lives in Brooklyn with her partner and his two daughters, has found a creative way to combine her business experience with her background in the arts. One of Seed&Spark's innovations is its main fundraising tool: the“Wish List.” It's a complete, illustrated budget for each film that audiences can subsidize, on a line-item basis. For example, for $15 you can enjoy the satisfaction of renting a Zoom H4N handheld digital recorder for the documentary Trichster(about trichotillomania, a disorder of compulsive hair pulling and skin picking), rather than merely chipping in what would amount to a tiny percentage of the film's total budget.

You can also volunteer to lend or donate an item directly to a filmâ€”a good option for oddities that the right person just might have lying around.“In a way, the more mysterious and seemingly arbitrary, the better,” says director Daniel Goldberg, who landed donations of oxygen masks, medical vials and the algal dietary supplement Spirulina for his short comedy The Master Cleanse through Seed&Spark.“People don't necessarily know how the props will be used,” he notes,“but I think we make a good case that they're necessary to tell the story, and people want to be a part of that.”

Because many items are either mysterious or technologically esoteric, descriptions written by the filmmakers carry a lot of weight. (Short and charming goes a long way: Trichster director Jillian Corsie captions her request for a“Redrock Handheld Rig Rental” with“Because a shaky camera = sick audience.”)“Part of what we wanted to do on Seed&Spark was to also help the audience members understand how much goes into making a film,” Best explains.“You make a list transparent, and all of a sudden [the audience realizes], â€˜Whoa, that's a lot of stuff they have to deal with.' ”

As with other sites, donors also get incentives like signed posters and highdefinition downloads of the finished film. But more importantly, says Best, they become“followers” with access to exclusive content throughout the film's development. Examples include behind-the-scenes video updates from the set, interviews with the creative team, previews and original mini-films related to the larger movie. Users also earn“sparks” for donating, following, publicizing or streaming movies; the sparks, in turn, can be used to watch more movies or be exchanged for merchandise.

From the filmmaker's side, the process is also simple and transparent. During a fundraising campaign, Seed&Spark holds the funds in escrow until a film makes 80 percent of its budget, at which point it's“greenlighted” and the funds are released to the filmmakers. When a project doesn't meet that goal, the funders get their money back. Otherwise, the creators can use the cash as they see fit, including for items not on the original budget, if changing circumstances demand it.

Best and her four partners personally approve all the film proposals for Seed&Spark, but there are no formal restrictions on length, genre or subject matter, apart from a restriction on pornography. Since the movies themselves don't exist yet, Best says preparation and passion are what she looks for:“Essentially, can you convince me that this project needs to be made now, and that you believe you can build the community to make this project?”

Inaugural participant Bodine Boling (director of a time-travel sci-fi thriller called Movement + Location), has been delighted with the level of support:“This is not my first crowdfunding campaign, but it is the first time I've had this level of attention and investment in my project succeeding,” Boling says.“Any time I had a question or needed advice, Emily made herself immediately available.”

After the movie is finished, filmmakers can upload it to the Seed&Spark site and receive 80 percent of the streaming fees it collects. That's very different from a conventional distribution deal, packed with middlemen who drain the creators' take to pennies on the dollar. Still, Best says that building an audience through Seed&Spark could give a filmmaker more leverage in a studio deal:“If you walk into a meeting with a sales agent or a distribution company with a following, that's a different kind of negotiation,” she notes.“What we really want for filmmakers is that they have the most choice.”

Along with 20 percent of the streaming fees, Seed&Spark collects a 5 percent commission on the money each film raises. Currently, any profits go into the company; the Seed&Spark leadership works solely for shares and pays the bills with other work (Best, for example, does a lot of voice-overs). The company's officers hope to draw salaries after another round of general fund-raising.

The modest fee structure and high remuneration rate for the artists speak to Seed&Spark's central philosophy of“Fair Trade Filmmaking,” which is the depressingly radical idea that artists and their audiences should be the most important and rewarded players in the movie industry.“Right now, filmmakers don't get to sell their films to their audience; they sell their films to a sales agent, who sells it to a distributor, who gets it to an exhibitor, and then the money gets passed back up and there's usually nothing left for the filmmaker,” Best notes.“In fact, there's usually nothing left for the film investor.”

By blurring the line between investor and audience, Seed&Spark's crowdfunding aims to give audiences a bigger stake in a movie's success. Community-supported films, by their very nature, notes Best, build up defenses against the evercircling vultures of bankruptcy and indifference:“I could save up a whole bunch of my own money and make a movie, and that would be 100 percent my  own risk,” she says.“Or, I could enlist a whole bunch of community members in advance, who are taking on a little portion of the risk that it might not get made, that it might not be good, etc. But I'm already diminishing the risk that no one will see it. Not only that, I'm creating a whole bunch of stakeholders in advance, who are actually going to like it better just for having been involved.”

Justin Warner '93 (justinwarner.net) is a New York-based playwright, lyricist, journalist and a frequent contributor to Haverford magazine, where this article originally appeared.