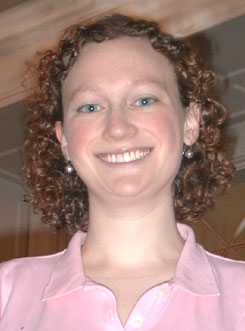 Published
Share
Elizabeth Bonapfel '04 fell in love with England when she spent her junior year at St. Hilda's College, Oxford University. Now, she'll return to the country she considers a second home as recipient of the William Penn Fellowship at the Chigwell School, a co-ed boarding school 10 miles outside of London.

Elizabeth Bonapfel '04 fell in love with England when she spent her junior year at St. Hilda's College, Oxford University. Now, she'll return to the country she considers a second home as recipient of the William Penn Fellowship at the Chigwell School, a co-ed boarding school 10 miles outside of London.

The school's most famous alumnus is William Penn himself (Class of 1656); the library was once the school room where he was taught, and his spirit and ideals continue to influence Chigwell's education of its students. The Fellowship in Penn's name seeks to encourage a better understanding between Great Britain and the United States by sharing intellectual and cultural experiences as part of Chigwell's everyday life.

From September 2004 through July 2005, Bonapfel will live in one of the girls' boarding houses and serve as a mentor and tutor to the residents;“It's a lot like my responsibilities as a Customs person,” she says. She'll be involved in Chigwell's extracurricular activities, coaching soccer and possibly assisting with the production of the student literary magazine. She'll have the chance to join school expeditions to London and other parts of Europe. And she'll take a turn at the front of the classroom.“I'll probably teach a literature course with an American twist,” she says. The curriculum might include such works as The Adventures of Huckleberry Finn, The Great Gatsby, and Our Town.

Bonapfel, an English major, is a fan of 20th-century modernist fiction and is writing her senior thesis on James Joyce's Finnegan's Wake.“I've always loved writing, too,” adds the former“Perspectives” editor of the Bi-College News.

The Atlanta resident has been actively involved in the Haverford community during her years here. In addition to being a Customs person and working for the student newspaper, she has served on the Study Abroad Advisory Board, acted as student representative on the Dean's Search Committee, and chaired the Joint Student-Administration Alcohol Policy Panel. She has mentored students at Heston Elementary School in West Philadelphia through a program sponsored by 8th Dimension, and was a goalkeeper for the women's soccer program. She sees her fellowship as a stepping-stone to a future that she hopes will include graduate school, a Ph.D., and the opportunity to teach at the college level.

For now, she's thrilled to be going back“across the pond.”“There are so many little things I missâ€”the different idioms in the language, taking tea in the afternoons, even the sizes of their paper!” she says.“And I've always admired the country's approach to education and learning.”

“Elizabeth Bonapfel is, simply put, a first-rate human being, who through her commitment to scholarly excellence and service to the community, absolutely represents the best of Haverford,” says Steve Watter, Senior Associate Dean at Haverford and Dean of Student Life.“She impressed the William Penn Fellowship Committee and the representatives of the Chigwell as someone who would ably and successfully undertake the responsibilities of the William Penn Fellow.”