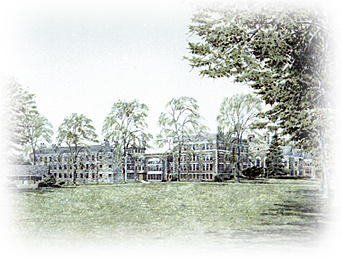 Published
Share
An international leader in research on short- and long-term memory and the former editor of Science Magazine, has made a $15 million gift to Haverford College.

Daniel Koshland, a professor emeritus of molecular and cell biology at the University of California, Berkeley, is making the gift in support of a new science complex at Haverford, to be named in memory of his wife, Marian Koshland, a prestigious immunologist and former member of the college's board, who died in 1997.

Haverford College president, Tom Tritton, who announced Mr. Koshland's gift during a campaign kickoff dinner for the new facility on October 1, noted the extraordinary careers of both Koshlands, whose two sons attended Haverford. "The college is quite proud and appreciative of the support Dan and Marian and their family have given to Haverford," said Tritton.

"The design of our new integrated science complex will foster collaboration among faculty and students in all the life sciences and will represent the best kind of pedagogy. I'm delighted that this new facility will be associated with two such brilliant scientists."

When constructed the 140,000 square-foot science complex will enable the departments of chemistry, physics, astronomy, mathematics and computer science to relocate from their current facilities across the campus and join biology and psychology in an integrated teaching and research complex. Long a leader in undergraduate science education, Haverford's new facility will reflect the increasingly interdisciplinary approaches and common modes of inquiry that are taking place in the life sciences.

"Marian Koshland believed fervently in our shared vision of combining research with more formal teaching in undergraduate education, and she saw, before many, the importance of abolishing the boundaries between the scientific disciplines," said Haverford biologist and past department chair, Judy Owen. A member of Haverford's faculty since 1981, Owen had known Koshland through her own work in immunology and her association with Haverford.

"She was a clear-eyed critic as well as an advocate of our educational mission and gave help behind the scenes on many occasions," said Owen. "Somehow, she knew instinctively how to be involved without being intrusive."

Marian Koshland was elected to Haverford's board of managers in 1982 - two years following the college's move to full coeducation. In her 14 years of service on the board, she was an inspiration and mentor to generations of women who chose to follow her path of maintaining a career and raising a family. In 1995 Marian Koshland was awarded an honorary doctor of science degree in recognition of her contributions to the college's science programs and to the scientific community at large. In 1998, the college established the Marian E. Koshland Prize in biology, awarded annually to a Haverford student for excellence in research in biology.

From her own career experiences and from what she observed, Koshland believed in the power of "hands-on" experience as a way of attracting students to careers in the sciences. In a 1996 article in the Annual Review of Immunology, Marian Koshland noted that undergraduate research projects conducted in close contact with professors are responsible for "the high turnout of scientists by small liberal arts colleges and for the high rate of success among those scientists."

Born in New Haven, Connecticut in 1921, Marian Koshland earned an undergraduate degree in bacteriology from Vassar College in 1942 and a master's and doctorate degree in immunology from the University of Chicago in 1943 and 1949, respectively.

Koshland was one of very few women active in bench research when her career began. Her graduate work lead to a vaccine for Asiatic cholera and established her interest in the biochemistry of antibodies, the key components of the immune response against many microbes. Following a post-doctoral fellowship at Harvard Medical School, she joined the Brookhaven National Laboratory in 1952 to conduct research in bacteriology and immunology.

In 1965 both Marian and Dan Koshland joined the University of California at Berkeley. Marian was appointed associate research immunologist in the virus laboratory and eventually served as chair of the microbiology and immunology department. At the time of her death, she was head of the department's graduate affairs division.

Among Koshland's many contributions to the scientific world was her discovery of the variations in the amino acid composition of antibodies that explained how they recognized invading organisms or other foreign material in the body.

In addition to her service on Haverford's board, she was a member of the National Academy of Sciences, the National Science Board, the National Academy of Arts and Sciences, and the American Society of Biological Chemists. She was a past president of the American Association of Immunologists and a member of the Council of Allergy and Infectious Diseases of the National Institutes of Health. Her research was published extensively through more than 200 articles in scientific publications, and she served on the editorial boards of the Annual Review of Cell Biology, the Journal of Immunology, Biochemistry and Immunochemistry.

Daniel Koshland, who at age 79, continues to teach and conduct research at the University of California, Berkeley, is credited with leading the campaign at Berkeley to modernize its biological sciences in the 1980s.

During his 34 years at Berkeley as a researcher and professor of molecular biology, Koshland produced major advances in the understanding of enzymes and protein chemistry, including his well-known concept of the "induced fit theory." Currently he is studying the chemical reactions involved in Alzheimer's disease by analyzing changes in brain cells.

For ten years - from 1985 to 1995 - Koshland was editor of Science Magazine, the country's largest circulation scientific journal which publishes primary research across the entire spectrum of the sciences. He made several changes, most significantly, shifting the make-up of the editorial board from writers to scientists with Ph.Ds.

Last September Koshland received the Albert Lasker Award for Special Achievement in Medical Science. The prestigious Lasker Award is called "America's Nobel," and many of its recipients have gone on to win the Nobel Prize. Koshland also is a recipient of the National Medal of Science, the Edgar Fahs Smith and Pauling Awards from the American Chemical Society, the Rosenstiel Award of Brandeis University and the T. Duckett Jones Award of the Helen Hay Whitney Foundation.

As part of Haverford's celebration of the life of Marian Koshland and the generosity of the Koshland family to the college on October 1, Daniel Koshland took part in a symposium on integrated learning and moderated a discussion with Dr. Edward O. Wilson, a Pulitzer Prize winning author and biologist from Harvard University.