Haverford on the Radio 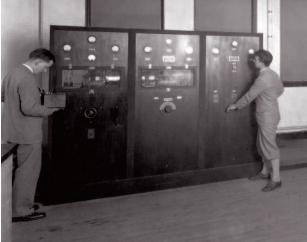 (This article first appeared in the Spring/Summer 2012 issue of Haverford magazine.)

I first set foot in Haverford College radio station WHRC in January 1986. I quickly became a DJ and was thrilled to have access to the station's record library, which was full of historical gems. I had no idea that the funky 1950s records that I mixed into my music sets were a sign of the 640 AM station's lengthy and storied past. On the occasion of my 20th college reunion in 2009, I organized a tour of WHRC in order to connect with station alumni and document Haverford's radio history. Although only a handful of folks showed up, I spoke with many more in the years that followed. From these conversations and research, I discovered that although Haverford radio's pioneering achievements are largely un-known today, back in the early 1920s the Radio Club was, according to a newspaper report of the time,“helping to put Haverford on the map.”

Radio broadcasting began at Haverford in 1923, when AM station WABQ was built and launched by the 15-member Haverford Radio Club. Only the second radio station in Pennsyl-vania, WABQ was described as having“one of the most unusual forms of aerials ever used by a radio broadcasting station.” WABQ's beginnings predated electric phonographs, so the station aired live musical performances from campus and the Ardmore Theatre. The club also conducted ambitious wireless projects, communicating by Morse code with students as far away as London in 1924. The New York Times reported that this was“the first time that educational establishments in America and England have talked to one another by the means of wireless.” The club held wireless chess competitions, and according to the Times, the match with Oxford was“the first international chess match by amateur radio.”

By spring 1925, the Radio Club was one of the biggest clubs at Haverford and was airing lectures, speeches and concerts to listeners as far as 1,500 miles from the campus. The powerful WABQ signal was not only a boon to Haverford, but also an appealing asset to outside interests. As the students who built WABQ approached graduation, the station was sold to WFAN in Philadelphia. (WFAN eventually became WIP, now owned by CBS.) According to the 1927 Haverford College Record,“Though loath to part with the station, it was deemed advisable to sell it at the time mainly because the men who had built and operated the apparatus were to graduate in June, and the continuation of the broadcasting activities would be in doubt.” Although Haverford students were allowed to broadcast from the WFAN studios, interest waned and the Radio Club shifted its focus to wireless projects and code classes. The 1933 yearbook listed the club as a“defunct organization.”

By the late 1930s, the number of licensed college radio stations around the nation had declined considerably and students were beginning to pioneer campus-only radio networks, making use of carrier-current technology, which uses a building's electrical system to transmit a signal to a small area, like a building or group of buildings. By 1938, Haverford's Radio Club was revived, and by 1942 a small campus-only radio station, WHAV, was broadcasting from the Union building. Ken Blum '49 recalled that WHAV aired mostly music (particularly jazz and classical), along with news, basketball games and events.

In the 1940s, college radio stations began to organize, and WHAV became a member of the first regional college radio network, along with Swarthmore (WSRN), Bryn Mawr (WBMC) and the University of Pennsylvania (WXPN). The member stations planned to share programming and broadcast over a commercial station in Philadelphia. In 1946, WHAV was renamed WHRC after the Federal Communications Commission asked the station to change its call letters, most likely because of the impending launch of a similarly named station in Massachusetts.

Along with technical advancesâ€”including a permanent line for sports broadcasts from the gym, experiments with FM, and the purchase of a tape recorderâ€”WHRC also faced equipment failures and setbacks. An entry in the 1953 yearbook said,“The radio station proceeds on its steady path of repair, construction and repair â€¦ the fifth entry telephone still picks up most of the programs with alarming clarity, and 78 rpm records still idle around 33 1/3.” The carrier- current broadcasts were often joked about, and the 1954 yearbook described WHRC as“the only radio station you can get by turning on the hot-water faucet.” Community radio pioneer Lorenzo Milam '57 remembered playing classical music on WHRC, and called the station a“labor of love,” since“the signal barely got up enough steam to [get] out to the dorm rooms and halfway down the Nature Walk before it pooped out.”

Despite these challenges, WHRC broadcast for 20 hours a day and was recognized as having the best radio show by a local commercial station. Bruce Reeves '55 remembered conducting interviews for WHRC with prominent guest speakers like Bill Buckley and Aaron Copland. In the 1960s, WHRC did experimental stereo broadcasts and ambitious live remotes.“One of our little triumphs,” recalled Charles Read '61,“was to broadcast a campaign speech by John F. Kennedy by remote hookup from a shopping center on the northwest side of Philadelphia.” In the early 1970s, station director Steve Bronstein '75 moved WHRC from the top floor of Union to the basement of the Dining Center. The station played mostly rock music and was influenced by free-form FM stations of the era. One of Bronstein's favorite memories was of doing his“late night shows” and“having the freedom to play whatever I wanted.” By the late 1970s, WHRC was playing an eclectic mix of music, including punk and new wave, and Perry Michael Simon '82 said that the station was“painted purple with cartoon sheep drawn on the walls.”

By the 1980s, WHRC had more than 6,000 records and over 100 DJs, and broadcast in the Dining Center and the dorms. However, the carrier-current system was failing, and attempts to move the station to FM fell through. By 1994, WHRC was off the air. According to a Philadelphia Inquirer article,“the dining service took over its studio and offices, haphazardly stacking dishes and equipment on top of records.” Dan Silver '02 remembered arriving on campus in 1998 and finding that there was no radio station. Silver worked with other students to bring WHRC back in the fall of 1999 thanks to donations from an anonymous alumnus. Once again, WHRC aired music shows (including an electronic techno show hosted by Silver), talk shows and sporting events. However, despite the influx of energetic DJs and new broadcasting equipment, the station struggled with its unreliable signal on campus. WHRC staff explored the possibility of obtaining a low-power FM license, but these were in high demand and the student DJs were again left without a licensed broadcasting option.

By the summer of 2000, changes to the campus phone service further disrupted WHRC's broadcasts. Following that, a lightning bolt knocked out a line connecting the campus to the Haverford College Apartments, cutting off broadcasts to students living there. Nathan Keim '04 helped rewire the WHRC studio around that time and told me that by 2001 WHRC was broadcasting on the Internet, with the carrier-current system“mostly defunct.” Students could still hear the station in the Dining Center at mealtimes, but there were few online listeners. Despite that, there were 72 student DJs in spring 2002. By 2005, WHRC was experimenting with streaming video and broadcast a men's basketball game online for an estimated 100 viewers. But WHRC faced another setback in January 2008 when a hacker attack shut down the website, prompting staffers to rethink the purpose of the radio station. In part, the concept of“radio” was losing its luster among college students with the advent of online music and iPods. In a 2009 article in the Bi-College News, Genna Cherichello '11 wrote,“Why listen to a music-based radio show anyway when you have your iTunes open?”

In spring 2009, WHRC came back for a semester as a podcastfocused music club presenting live DJ sets on campus. In fall 2010, another group of students began work on reimagining WHRC. They investigated broadcast options, launched a website with blog posts and playlists, and held a fund-raising party. But by spring 2012, even their hopes of a WHRC revival were dashed.“We didn't receive the student response we need to run a radio station,” said Thy Vo '14.

As I complete this article, remnants of WHRC still remain in the Dining Center basement. It's clear that despite the strong desire among students to connect with one another through music, the radio and sound, the challenges of running a radio station can conspire against the best of intentions. Considering the number of deaths and rebirths experienced by WABQ, WHAV and WHRC over the years, I wouldn't be surprised if we soon hear of yet another vision for Haverford radio in the 21st century. Stay tuned â€¦

Jennifer Waits '89 was a WHRC DJ and music director between 1986 and 1989. Since graduation, she's volunteered at several college radio stations (WBGU and KSPC) and has been hosting a weekly music show on Foothill College radio station KFJC since 1999. She writes extensively about the college radio scene for her blog SpinningIndie.com and helped launch RadioSurvivor.com, a website devoted to radio news. This brief history of radio at Haverford is part of a bigger project, which includes a forthcoming article,“From Wireless Experiments to Podcasts: The Secret History and Changing Role of College Radio at Haverford College 1923-2010,” for the academic journal nteractions: Studies in Communication and Culture. Decade-specific articles about WHRC can also be found on Waits' Spinning Indie blog, where she documents field trips to radio stations all over the world. Alumni are encouraged to send their Haverford radio memories to her at spinningindie [at] gmail.com.