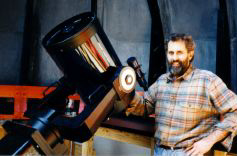 Published
Share
Stephen Boughn researches cosmology and extra-galactic astronomy in search of the generation and expansion of the universe.

Haverford astronomer Stephen Boughn conducts research primarily in cosmology and extra-galactic astronomy. Since the 1990s, he has been searching for correlated structure in the cosmic X-ray and cosmic microwave (CMB) backgrounds, the radiation left over from the hot "Big Bang" beginning of the universe.

Such correlations are directly related to several aspects of the large-scale structure in the universe, including the accelerated expansion of the universe by "dark energy," the way in which X-rays trace matter, and the presence of large amounts of ionized hydrogen in the universe.

In a recent study published in the January 1, 2004, issue of Nature, Boughn and Robert Crittenden at the University of Portsmouth, England, compared data from a full sky map of CMB (made from NASA's Wilkinson Microwave Anisotropy Probe statellite), the hard X-ray background mapped by the HEAO1 satellite 25 years ago, and the recent, nearly full-sky, NVSS radio galaxy survey.