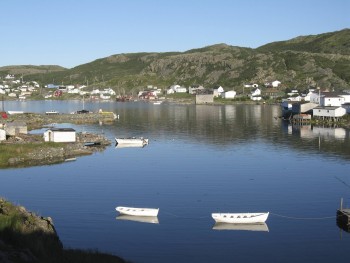 Stephen Chehi '11 did not know what to expect when, the summer before his senior year of high school, he set off to spend six weeks pursuing his photography and reading on Fogo Island, a small fishing village off the coast of Newfoundland.

What he found was an idyllic place, full of scenic natural locales and friendly neighbors who encourage an open-door policy.“There's something about it that's unspoiled,” he says.

Now, Stephen's parents, Mark '78 and Johanna Chehi, want other Fords to experience Fogo Island the same way their son did by sponsoring a summer residency program for fine arts students. One or two students will spend four to six weeks during June and July at the Chehis' harborside three-bedroom cottage, immersing themselves in their artwork and the local culture.

The idea for a residency program came to Mark Chehi after he bought the house two summers ago.“I looked at the hard reality: We'll spend two weeks a year there in August and a few visits in between, but it will be relatively unused for the balance of the year. How could we make this an asset for other people?” He wanted to give others the opportunity Stephen had had to explore the island and focus on an independent project in the arts.

“Fogo Island is a place of remarkable beautyâ€”you feel like you've time-traveled into the past when you get there and that you are at the edge of the civilized world,” says Emily Cronin, Associate Director of the Hurford Humanities Center, who visited the Chehis' house this summer and is helping to facilitate the residency.“It is remote, starkly beautiful and green, with few of the distractions that can overwhelm us with our hyperactive lives.”

Those accepted for the program will be provided with living accommodations, meals, studio space, local community guidance, and a small stipend. In return, they are expected to not only pursue their art and interact with their neighbors, but also help establish and manage a local nonprofit community art gallery in one of the old churches.“We want to have Newfoundland and visitor art exhibited there,” says Mark Chehi.

This past summer, Associate Professor of Fine Arts Ying Li spent time at the Chehis' house, creating a series of paintings that will be exhibited in the Lohin Geduld Gallery in New York City November 20-January 3.“They're different from any landscapes I've ever painted,” she says.“On Fogo Island, there are no trees, the sky looks huge, the clouds change every second. From the window you can see spectacular sunsets over the harbor. It's a very special place.”