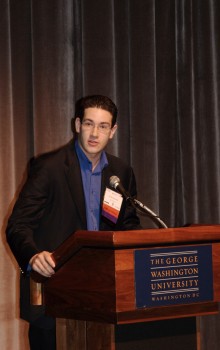 Published
Share
David Burstein '11 has created a documentary aimed at getting newly eligible voters to exercise their rights in the '08 election. See the film December 6 at 9:00 PM in Stokes.
When most parents were reading bedtime stories to their toddlers, the parents of David Burstein '11 were reading him The New York Times.“I was brought up to be engaged and involved in issues and things that matter,” he says.“From early on, I had this interest in politics and need to make a difference instilled in me.”

This early political education has come to fruition in the documentary film“18 in '08,” which Burstein directed and produced. With a goal of getting more people ages 18-24 to vote in the 2008 election, the film includes interviews with politicians from both sides of the aisle as well as actors, cultural figures, media commentators and student leaders.“18 in â€˜08” examines the stakes of the next presidential election, explores the issues and ideas important to today's youth, and reveals the ways in which politicians' decisions affect young America, as well as the role new media and technology plays in mapping the political landscape.

This is not Burstein's first foray into either filmmaking or youth empowerment. As a teenager, he founded the entirely student-run Westport Film Festival in his Connecticut home town. Its success, he says, led him to believe that“young people can really achieve something themselves if they put their minds to it.”

The morning after the 2004 election, Burstein and his friends reflected on the fact that many young would-be voters stayed away from the booths in droves, and wondered what could be done to encourage their participation. Burstein took his cue from the recent resurgence of documentary filmmaking and set out to make“18 in '08” from the perspective of someone the same age as his target audience.“I made this film as a young person for young people, as opposed to an older person or educator thinking what young people might like to see. I wanted to make a direct appeal to my peers.”

He began filming in July of 2005, amassing an impressive list of interview subjects from family and friend connections and from his own persistence. He secured the cooperation of many senators and representatives simply by calling their officesâ€”repeatedlyâ€”and stressing the importance of his project. He also attended the conferences of the College Democrats and Republicans and polled student attendees.

From his student interviews, he uncovered myriad reasons why many young people avoid political involvement:“People don't have time, aren't interested, don't have enough access to information, care about things but don't think the government can handle them, are generally cynical and turned off by the corruption.” Burstein also found that the issues young people consider pivotalâ€”the Iraq war, health care, social security, Darfur, gay rights, abortionâ€”don't differ much from the concerns of older voters, with the possible exception of college tuition and student loans.

He provides inspiration by profiling young politically involved individuals like 30-year-old Connecticut Congressman Chris Murphy and a senior at Tufts University serving his second term in the New Hampshire State Legislature. And by studying past and present youth-friendly candidatesâ€”Ronald Reagan, Bill Clinton, Howard Dean, Barack Obamaâ€”Burstein paints a picture of what young people are seeking:“People who are charismatic and authentic. Young people have a good radar for phoniness. Also, all of these candidates have messages of wanting overwhelming change and inviting everyone to be part of that movement.”

â€œ18 in '08” has been screened in various locations throughout the country, and viewings are followed by talkback sessions with politicians, elected officials, and activists.“There's been broad support from Democrats and Republicans across the board, and from everyone who comes in contact with the film,” says Burstein.“The film provides information but also leaves viewers with questions, and the talkbacks point them in the direction of people who can provide answers.”

Meanwhile, a DVD of“18 in '08” was released at the end of October and is sold at screenings and at the website www.18in08.com (where visitors can also watch clips from the film and see Burstein's appearance on ABC's“World News Tonight”). Burstein is also entering into promotional partnerships with YouTube, Facebook, and MySpace, with the intent to post footage on these sites.“I'm editing some of the interviews down to two-or ten-minute versions, and creating viral videos and short PSAs on specific issues.”

He has his sights set on a major launch in January 2008. He's hiring a PR company to orchestrate a media campaign, and hopes to hold a screening every other day right up until the election. He also has in the works a 50-state tour during the summer and a high school/college tour in the fall.

And somehow, he still finds time to enjoy his first year at Haverford, where his own political activism is slowly flourishing.“I've attended some meetings of SPN (Student Political Network) and the College Democrats, and I'm on the Council of 12,” he says.