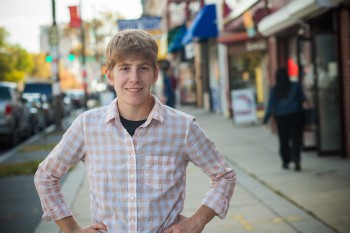 Published
Share
Sarah Morris '05 is working to change Pennsylvania's policies around sentencing juveniles to adult prisons and co-founded an organization that is fighting the state's expansion of prisons.

When it comes to jailing its young people, Pennsylvania leads the nation in a category that Sarah Morris '05 is fighting to change: The state has sentenced nearly 500 people who were tried as youths to life without parole.

In early October, Morris and other members of the Pennsylvania Coalition for the Fair Sentencing of Youth led prisoners' family members to Harrisburg to meet with legislators.“We want to help [legislators] understand why someone who is now age 45 and was sentenced to life at age 16 might deserve a second chance. We don't think it's fair to say someone [at 16] won't change or transform for the rest of their life,” says Morris.

A Chicago native who majored in political science with a concentration in African studies, Morris began her advocacy work after graduation as a Haverford House fellow with the American Friends Service Committee's Youth Art & Spirituality Project. She went into Philadelphia's adult prisons each week accompanied by artists, poets, and musicians to meet with young people awaiting trial.

When her fellowship and that project ended, she co-founded the Youth Art & Self-Empowerment Project (YASP) to continue the work and also support youth once they're released. The organization is run by young people whom Morris helps train and supervise.

YASP is also fighting to repeal Act 33, an amendment that Pennsylvania passed during the“get tough on crime” era of the mid-1990s.  The law allows teens ages 15 and older to automatically be tried as adultsâ€”and held in adult prisonsâ€”for a broad range of crimes. The consequences have been devastating, says Morris.

“There are a lot of reasons why it doesn't make sense to have young people in adult jails,” she says.“They're more likely to be physically and sexually abused and to attempt suicide, and less likely to receive education or rehabilitative support than in juvenile facilities. They're also more likely to be re-arrested.” A short documentary made by YASP, called“Stolen Dreams,” highlights the effects on the lives of teens that were or are currently serving time in Pennsylvania's adult prisons.

The Southwest Philly resident is also heavily involved in Decarcerate PA, an organization she co-founded that is fighting the state's expansion of prisons and the prison population. (In 1980 there were nearly 8,500 prisoners serving time in Pennsylvania's prisons; today there are 51,000.)â€œWe want to invest resources instead in job creation, housing, schools and health centersâ€”these are things we think have a much greater role in enhancing public safety than building more prisons,” says Morris, who's upbeat as well as passionate. Several years ago, she debated the state's corrections secretary, John Wetzel, on public radio. During the hour-long debate, Morris, who was representing Decarcerate PA, calmly challenged Wetzel's contentions that the state is working to decrease its prison population.

While juvenile justice is clearly her life's work, the hours she spends on it are voluntary; her“real” job is with the city's Farm Philly program, which teaches kids about urban gardening. Not surprisingly, Morris doesn't have a lot of free time.“I play on a weekend soccer team, I make time to cook, and I have a backyard garden,” she says.And she never loses hope.“I get a lot of motivation from the young people I work with. Every Saturday, I'm in Philly jails with young people who are incarcerated but still manage to find joy and laughâ€”who despite their situations see possibility in the future.