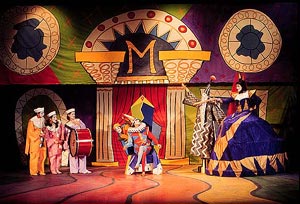 Published
Share
Hiroshi Iwasaki, senior lecturer and designer/technical director of theater at Bryn Mawr College, wants his exhibit of sets and costumes at Cantor Fitzgerald Gallery to re-create a theatergoer's sensation of entering another world.

“I want to evoke the sense of a theatrical space where reality and illusion co-exist,” he says.

“I want all sorts of incoherent, disparate images to create a sense of a waking dream,” he says.

A French literature major at Osaka University for Foreign Studies in Japan and UniversitÃ© de Lyons in France, Iwasaki first came to the United States on a trip and stayed to pursue his M.F.A. in theater at Boston University. He combined his interest in language and literature with his talent for visual representation.

“The word-centered intellectual world is often suspicious or afraid of the parallel existence of the non-verbal force that surrounds us and compels us often unconsciously,” he says.“I am most interested in exploring the interplay between the word and image in dramatic sense that is the core of the theatrical experience.”

Hiroshi Iwasaki has designed scenery, costume and lighting for a variety of productions. His most recent Philadelphia credits include Red and Kiki and Herb, Pardon Our Appearance at the Wilma Theater; Julius Caesar and Macbeth at the Philadelphia Shakespeare Festival; James Joyce is Dead and So is Paris at Pig Iron Theatre Company; and The Threepenny Opera at Bryn Mawr. He has also designed for dance and performance art at Headlong Dance Theater and Festival Cubano. With director Mark Lord he formed a unique experimental performance company, Big House (plays & spectacles), for which he has designed The Ride Across Lake Constance and Across. He is also actively involved with the Philadelphia Fringe Festival.