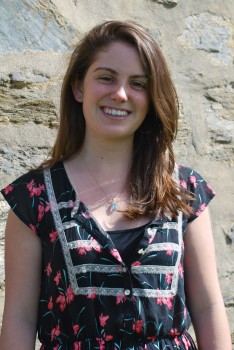 Published
Share
The astronomy major will do Fulbright-funded research on the properties of dwarf galaxies at the Institut d'Astrophysique de Paris.

Emily Cunningham '12 is the latest Haverford student to be honored with a Fulbright scholarship. An astronomy major, Cunningham's Fulbright proposal was titled“Modeling the Properties of Dwarf Galaxies.” She will do her Fulbright-funded research at the Institut d'Astrophysique de Paris with Dr. Gary A. Mamon.

Cunningham says the project relates to work she did with Haverford College Assistant Professor of Astronomy Beth Willman and Erin Boettcher '12 during the spring of her junior year. During a trip to the Kitt Peak National Observatory in Arizona, she worked with Willman and Boettcher to take observations of dwarf galaxies on the Observatory's 0.9 meter telescope and helped develop a method for detecting variable stars (whose brightness fluctuates as a function of time).“Observing variable stars in dwarf galaxies around the Milk Way allows us to better constrain the distances to these objects,” says Cunningham.“While I was involved in the beginnings of this project last year, Erin has continued the work as her senior thesis.”

Cunningham credits Professor Willman with playing an important role in her Fulbright application.“She encouraged me to start thinking about fellowships and scholarships for after graduation when I was a junior and when I expressed an interest in France, she connected me with Dr. Mamon,” says Cunningham of Willman.“She also helped me with my project proposal. She helped me to deeply understand the science I will be doing and how to convey its significance to an audience with no background in astronomy.”

For her own senior thesis, which is the continuation of a project she worked on during the summer of 2011 at the Harvard-Smithsonian Center for Astrophysics, Cunningham is studying the properties of pairs of active galaxies.“Every galaxy contains a super massive black hole at its center and in some galaxies we see a great deal of energy emitted from this central region,” she says. By studying pairs of galaxies, Cunningham hopes to learn whether interactions between them could be responsible for the activity of the black hole.

Cunningham says she had no idea what she wanted to study when she came to Haverford.“I chose to attend a liberal arts college so that I would have the opportunity to explore many different disciplines,” she says. An intro to physics course with Professor of Physics Walter Smith rekindled an interest she'd discovered in high school. Then, a freshman seminar in astrophysics with Professor of Astronomy Stephen Boughn (now her thesis advisor), clinched it for Cunningham.“In this course, students take the most basic physical principles (such as Newton's Laws) and apply them to objects in the universe. It is an amazing course. Before this, it never would have occurred to me that astronomy would be a possible major, let alone a career.”