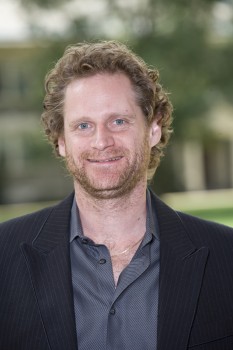 Published
Share
The new assistant professor is an anthropologist and filmmaker who focuses on West African politics, religion, and popular culture.

How do the performing artsâ€”theater, film, popular music, comedyâ€”generate dialogue about history and political change? This is just one of the research questions posed by new assistant professor of anthropology Jesse Shipley, who joins Haverford after teaching at Bard College in Annandale-on-Hudson, N.Y., where he was director of Africana studies.

Shipley, who holds a bachelor's degree from Brown University and a Ph.D. from the University of Chicago, concentrates on West African politics and religion, focusing on Ghana, Nigeria, and South Africa An author and filmmaker as well as an anthropologist, Shipley recently released a feature documentary film called Living the Hip Life on West African hip-hop, which has been featured on NPR's program Afropop and ABC News. He is completing a book on the same topic. To finish this project he is conducting research in the Bronx with African immigrant communities, exploring the globalization of the genre.

“Music plays an important role in what it means to be part of a national community and how people think about Diaspora,” he says.“People identify with national groups even while residing in another country.” Immigrant communities also use music to react against racist urban histories of the United States and to give young people a voice in critiquing such issues as politics and sexual violence in their home countries, he says.

Shipley is working on a new film about the 2010 Football World Cup, which will take place in South Africa. He will follow teams from other African countries and use professional athletics as a lens through which to examine globalization, masculinity, and the political economy of sports.

Currently teaching classes in visual anthropology and ritual, performance and symbolic practice, Shipley incorporates filmmaking and other media into his coursework.“I want to contribute to the study of visual culture at Haverford, including photography and film,” he says,“and let students explore themselves creatively through new media.”