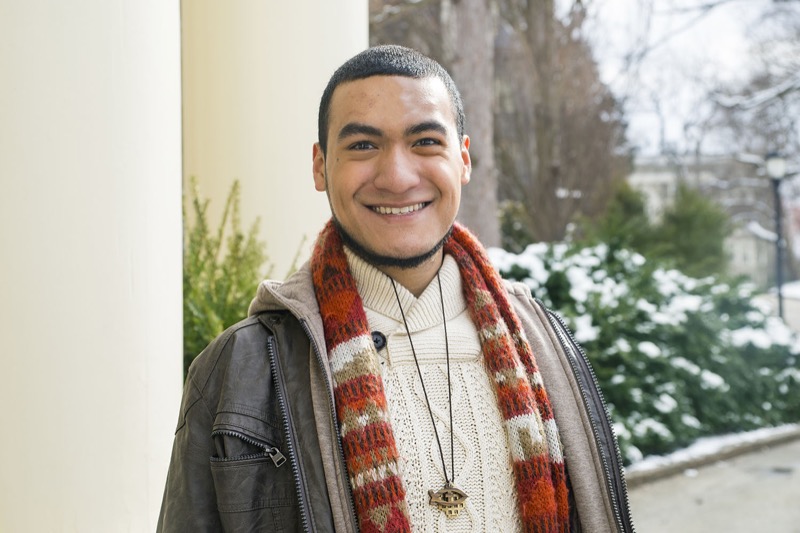 The future religion major will use the award to fund ancient Greek language studies this summer.

Cristian Espinoza '18 began his Latin studies in his New York City high school, but it was continuing them at Haverford that truly led him to fall in love with the classical world, he says. Now Espinoza will get the chance to expand his studies even further as he was selected as one of only two recipients of the Society for Classical Studies' 2016 Minority Scholarship in Classics and Classical Archaeology. The competitive scholarship funds summer study for students of color who have a record of academic excellence and interest and experience in the fields of classics or classical archeology.

"The ancient Mediterranean and Near East are a trove of beautiful literature, art, and culture that served as the backdrop for the rise and fall of multiple civilizations," says Espinoza. "This area has always fascinated me, especially the role religion—be it the Greco-Roman pantheon, Christianity, or Islam—played in influencing the sociopolitical ethos."

Espinoza, who applied for the scholarship at the urging of Visiting Assistant Professor of Classics William Tortorelli, intends to declare a religion major later this spring, and his interest in classical languages and literature will help serve his research in that field. He will use his $900 award to fund his study of ancient Greek at the Latin/Greek Institute at the City University of New York's Graduate Center back in his hometown. He is now looking forward to the texts that he'll be able to engage with after acquiring his new language skills.

"I would love to eventually read the Septuagint in its original Greek," he says, "in order to more fully engage with the content of the New Testament."