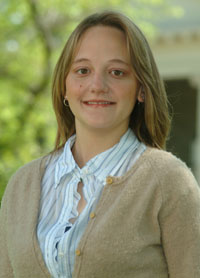 In August, Fornadel will travel to Australia on a one-year Fulbright Scholarship. She will be studying a disease spread by the hydatid tapeworm, (Echinococcus granulosus). The tapeworm infects dingoes and kangaroos in the wild and can spread to sheep and dogs. The disease, Echinococcosis, can be transferred to humans via consumption of food or water contaminated with stool from an infected animal; or by petting or otherwise interacting with infected dogs or cats. These animals spread the disease by eliminating eggs in their stool, which can contaminate their fur. Leashes or harnesses can also become contaminated and transfer the infection. Symptoms of Echinococcosis in humans are extremely slow-growing cysts (they can take years to develop) which are usually surgically removed. A blood test can determine whether a person is infected or not.

Last summer, when Fornadel was thinking about applying for a Fulbright, she knew she wanted to present a well-planned project, something that would embrace her interest in both fieldwork and laboratory work. Her science coursework at Haverford had led her to molecular epidemiology, how disease spreads at the cellular level. She wanted to interview people and survey them about the spread of the disease as well as work in the lab.“I really needed to find a place geographically where there was an endemic disease,” she says. Australia fit the bill. Fornadel, a Sayreville, N.J., resident, will spend part of her time in Melbourne working with Marshall Lightowlers on the development of vaccines against tapeworm diseases, including hydatid and others found around the world. She also will spend time in the Australian capital of Canberra with David Jenkins, a researcher who, in Fornadel's words,“basically started the work on this disease, researching it from his garage when funding was low.”

The Fulbright will pay Fornadel's airfare, housing allowance, and a monthly stipend. And it's all been a pleasant surprise for her. In March, she received a thick envelope from Fulbright when she wasn't expecting anything until May.“I saw how thick it was,” she says,“and I just screamed in the campus center.”