Building Bridges Near The Berlin Wall

Over winter break the Bi-College Chamber Singers embarked on a cultural exchange tour of Germany to perform with local choirs, including one featuring Middle Eastern refugee singers.

It began with a radio story. When Music Professor Thomas Lloyd happened upon an NPR segment in December of 2015 about the Begegnungschor, a Berlin choir that brings together German and Middle Eastern refugee singers, he was inspired. Since 1996, the director of Haverford's Choral and Vocal Studies Program has taken his 30-person group, the Bi-College Chamber Singers, on international tours—to Turkey, Mexico, Ghana, and Poland, among others—to collaborate with local singing groups and connect their musical training with broader cultural, community, and historical issues.

"Singing together provides a wonderful way to have genuine interaction with people in an unfamiliar culture even in a very short period of time," said Lloyd of the power of these cultural exchange trips.

This chance introduction to the Begegnungchor, courtesy of Weekend Edition, gave him the perfect idea for this year's tour.

"If we were fortunate enough to be welcomed by the Begegnungschor," said Lloyd, "we could possibly learn a great deal about what happens when people use music as a way of overcoming the inherent tensions in the complex and challenging cultural situation of the refugee crisis Germany is now facing."

With Nadejda Polcanova, a German Bryn Mawr exchange student, providing initial introductions, Lloyd and Begegnungschor founder Susanne Kappe arranged for a joint performance of the two groups in Berlin over winter break. The Germany choir would learn the African American spiritual "Swing Low, Sweet Chariot," and the Bi-Co singers prepared six songs from Begegnungschor's repertoire in both German and Arabic, including two songs by the popular Syrian singer Fairouz.

Thanks to the help of Bryn Mawr College Assistant Professor of German Qinna Shen, who came on board as a faculty trip co-leader, arrangements were made for two other choral collaborations to fill out the almost-ten-day tour. And then, after a year of planning, they were off. The Chamber Singers, Lloyd, and Shen left Philadelphia Jan. 5, for an 8-day stay in the German capital that included not just rehearsals and performances with three different choirs, but also a packed schedule of sightseeing and cultural emersion as well.

The group visited the Memorial for the Murdered Jews of Europe, the Berlin Wall and its memorial at Bernauer Straße, the DDR Museum (which details the history of life under the East German Stasi police), the Daniel Libeskind-designed Jewish Museum, the restored Reichstag, the Checkpoint Charlie Museum, the Topography of Terror Museum on the site of the former Gestapo headquarters, and the art and antiquities at the Pergamon Museum.

"It was a deep immersion in the rich history encompassing both the heights and depths of European culture and civilization in this historically pivotal but surprisingly intimate city," said Lloyd.

But the real reason for the trip was musical. After visiting Breitscheidplatz Christmas Market, where a terrorist attack killed 12 people just two weeks earlier, the Bi-Co group sang a German Christmas carol and “Swing Low, Sweet Chariot” in the Kaiser Wilhelm Memorial Church next door. The singers traveled to Potsdam one day for an informal joint performance and potluck supper with the Internationalen Chor in a candlelit basement of a local community center. They sang a shared program featuring a Mendelssohn motet and two Moses Hogan spirituals with the Kammerchor des Collegium Musicum, an award-winning university choir, in a packed historic church. And all of these performances led up to the original reason for the trip: the concert with the Begegnungschor.

After rehearsing with the German/refugee choir at their usual spot in a local parish hall, the final performance took place in an old City Hall building that had been repurposed to house refugees. The location, which encouraged many local refugee families to attend the concert, made the collaboration especially poignant for the Bi-Co singers, and led to that evening being the tour highlight for everyone.

"Singing in the refugee camp was one of the most incredible experiences of my life," said Chamber Singers member Emily Drummond BMC '17. "I remember standing in the courtyard of Berlin's old city hall, and hearing the sounds of life coming from every window—babies crying, children playing, people chatting—like someone had squeezed an entire city into one building. As we sang an Arabic song in the entrance hall, people drifted toward us and sang along. We weren't just performing for them, we were joining them, learning their music, seeing how they lived. I can imagine that refugees spend a lot of time learning how others live and trying to assimilate, so it felt appropriate that we were doing the same for them."

"We couldn’t help smiling when we got to the Syrian folksong in our 'Vogelgesang' arrangement," said Lloyd. "As soon as our violinist, Isabel Gross '17, started playing the melody for 'Ya teera tiri,' several people in the audience began singing along. A row of children in the front row began grinning from ear to ear that we were singing a song they knew and loved."

"Our shared repertoire was a lot more fun with the enthusiasm of the Begegnungschor," said Bola Orignuwa '19, another member of the Bi-Co group. "I realized that this performance was not about singing the right notes, but rather it was about connecting with people and enjoying the present moment." 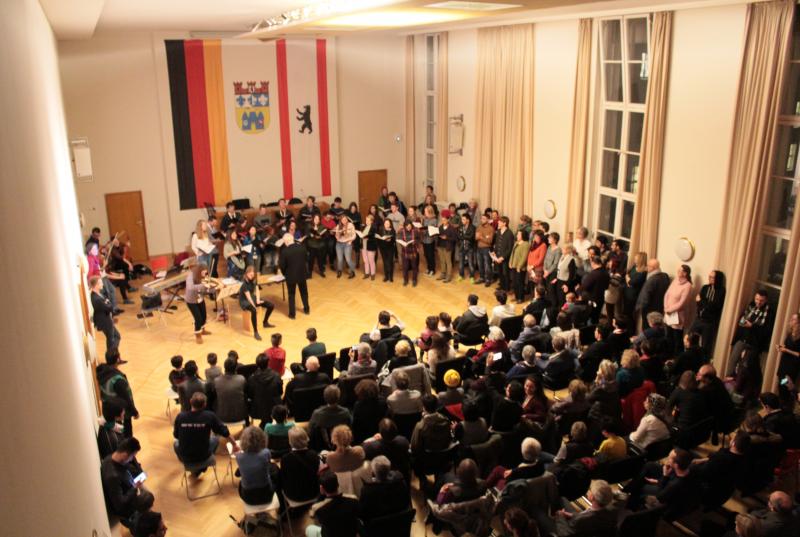 Of course being on foreign soil as representatives of an American institution and collaborating with Middle Eastern refugees during the final days of the Obama administration, politics were on everyone's mind. Many students remarked that they were surprised to be welcomed so warmly by the Europeans they met. And everyone returned stateside with a more sensitive view of the refugee crisis, colored by personal interaction.

"Meeting refugees—and eating with them, singing with them—made me realize how nuanced the situation is," said Drummond. "Refugees are human beings, with hopes and fears, family members, jobs, degrees, and hobbies. Many of them speak three or four languages. They leave for a variety of reasons. I met one man who was a journalist, fleeing potential violence because of his career, and I met another who was a pacifist, fleeing to escape the draft. Refugees are as multifaceted as the countries they seek asylum in, and singing with the Begegnungschor allowed me to see past the media representation of the refugee crisis and connect with Syrian Germans on a personal, human level through music."

"It sounds cliché to say that music bridges boundaries, that people who sing together cannot hate each other, but it’s true," said Tom Sternberg '17. "[Music] is a voluntary, joyful activity that remains one of the best and most versatile languages in the world. A good drum beat strikes German, Syrian, and American [ears] as equally exciting, regardless of language, history, experience."

The lessons learned from this cultural exchange will manifest in different ways now that the tour is over. Some Chamber Singers have arrived back at Haverford and Bryn Mawr newly interested in studying German. Others are looking forward to classes this semester covering issues explored in Berlin, such as the Cold War or the Holocaust. Some are interested in seeking Center for Peace and Global Citizenship funding for summer internships working with refugees. Two of the participants even found their senior thesis topic strengthened by the trip. And one singer, Adam Adorney '18, is studying in Berlin this semester and hopes to sing again with the Begegnungschor during his time abroad.

Lloyd, who is retiring at the end of this academic year, returned to campus reinvigorated with the power of what music can do.

"[I have] renewed faith in the belief that it is more difficult to hate a person or their culture after you have shared singing with them," he said. "By the end of our trip, our motto was 'Singen, nicht hassen,' which means 'Let's sing, not hate.' This can seem trivial and naïve on the surface, but it is difficult to hold on to the prejudices nurtured by political opportunism when you have actually spent some time with actual people in the class being targeted. Music just helps us overcome the natural inhibitions that often keep us from taking that step."

Watch videos of some of the Bi-Co Chamber Singers' concerts and collaborative performances in Germany.