After a Decade of Service, Dean Milden To Leave Haverford 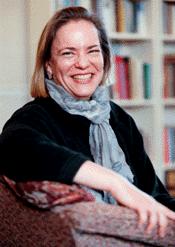 Published
Share
No students have ever officially called her mom, but on commencement day, when Randy Milden watches some 300 Haverford seniors receive their diplomas, she can't help but look over the parade of caps and gowns with a proud parental eye.

"When you see people go over that stage and see how people here have grown - so much development has happened," Milden says. "Even though we call them men and women when they first come here, the students aren't quite there yet. But to see them mature and really find out who they are and what they want to do - I have a very maternal feeling at that moment. It's very special."

After 10 years as the dean of students at Haverford, managing and mediating student crises ranging from slipping grades to the emotionally combustible issues of hate speech and sexual harassment, Milden has decided to take on a new post in a very different type of institution. In May she will move to Berkeley, Calif. where she will join fiance Steve Mayer and his two children Adam, 10 and Emily, 6.

Not only has Milden overseen a staff of five assistant and associate deans as well as the offices of the registrar, health services, housing, multicultural affairs, student activities and study abroad, she has acted as the symbolic parent to over 3,500 undergraduates during her 10-year tenure. Her cross country move to California and her new family might ironically provide her with the rest she naively thought she would find when she first came to Haverford in 1987.

"I thought of coming to Haverford as a sort of year for rest and relaxation," Milden muses from her sunny office in Chase. She is surrounded by the chairs and couches that have hosted more spontaneous crises and strategy meetings with students and administrators than she would ever want to count.

A former faculty member in the departments of psychiatry and reproductive biology at the Case Western Reserve University School of Medicine, Milden came to Haverford to fill a one-year position in psychology. After spending her career in large research institutions - she earned her M.A. and Ph.D. from the University of Michigan and her B.A. from Radcliffe - Milden was interested in experiencing "the luxurious opportunity" of a liberal arts environment.

She never did get the rest and relaxation - but she says she did find a true luxury: a small, dedicated and caring liberal arts community.

"It became absolutely clear that this is the only way to do the undergraduate experience," Milden says.

"I'd been in a medical school where the structure was very hierarchical and political," she explains. "It was very refreshing to be in a place where people used words like 'community' and 'respect' and really meant it."

So when the dean's position opened the next year, Milden jumped at the chance to stay on -- that is, after she asked ... what a dean does. The obvious answer was everything.

Milden, a specialist in feminist psychology who also runs a small clinical practice, looked at the position as an intellectual challenge.

"It was particularly appealing to me since I was teaching feminist psychology and I saw a lot of gender issues pertinent to the dean's office," she explains, noting when she took the post Haverford had been fully co-educational for only eight years.

"Because of the overarching progressive politics at the college, we had an easier time going coed, especially with our relationship with Bryn Mawr College and our Quaker traditions," she explains. "We could have easily felt fairly contented about where we were - but because the transition was fairly easy and without crisis, some of the subtler problems weren't addressed and persisted."

In her 10 years as dean Milden believes the office has become more inclusive regarding the issues of gender, race and sexual orientation and has increased programs and lines of communication across the campus - "Though there's still a lot to do," she says.

Nothing attests to that tenacity more than the fact she, fellow administrators and students have revised the college's sexual assault guidelines five times during her tenure. She views that as a positive, explaining it is a sign that students and administrators are communicating and debating about differences, rather than avoiding the issues. That, she says, builds a strong community.

But she'd like to see even more talk and debate -- and the more uncomfortable the better.

"Sometimes there can be a misunderstanding about Quaker practices and values," she says, noting politeness shouldn't be mistaken for respect.

"Even though we provide an arena to talk across differences, our conversations can be muted," she says. "Quakerism and the honor code ought to be challenging. It's not about making people feel comfortable as it is about confronting the issues as they are. And that really can't be comfortable all the time. If you really want to confront social issues and achieve social justice, it's going to be uncomfortable."

As for Milden's future career in California, she plans to take it slow and reflect some on where she wants to go next, be it education or administration or psychology or even political action or writing.

She's not sure if she'll miss the intensity of the job, but she'll certainly miss Haverford. Come May, when she watches her 300 students walk across the edge of the stage with their diplomas in hand and their major developmental years behind them, she might also consider a future career in music.