The Fungus Among Us

Bethany Teigen shows a group of tour members a mushroom in the forest. Photo: Sarina Smith. 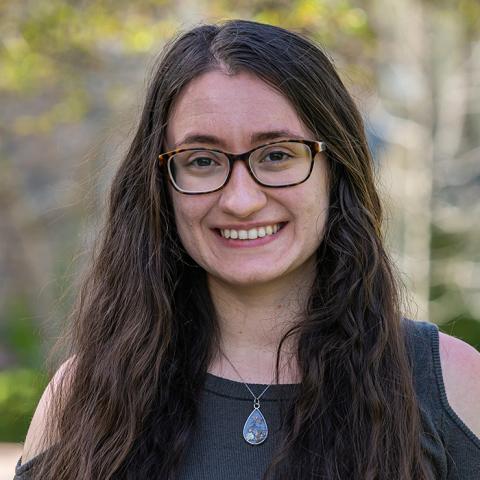 Bethany Teigan, Founder of the Philadelphia Mycology Club, led a fungi foraging tour around Haverford’s Arboretum in September! Here, I share some of what I learned from her tour and my reflections on the experience.

What is the first thing you think of when you hear the term fungi? You’re most likely to picture a mushroom with a cap, which is commonly what we eat. However, even though mushrooms like portabellas are delicious, there is so much more diversity in the fungi kingdom than often meets the eye! If you take a stroll in the forest after a rain, you are bound to find numerous fungi popping up through fallen leaves and decaying old logs. Take a peek in your backyard or around your neighborhood, and you are bound to find fungi there, too. Fungi may seem ephemeral and mysterious, but they are all around us if you look closely enough. Last September, Bethany Teigan, Founder of the Philadelphia Mycology Club, led a fungi foraging tour around Haverford’s Arboretum, and I had the chance to join her as she shared her passion for this remarkable kingdom. Today, I will share some of what I learned from her tour and my reflections on the experience.

To begin the tour, Bethany introduced herself and talked about how she became interested in fungi. While dog walking, Bethany noticed numerous fungi species, and she wanted to learn more about them. When she tried to find other fungi enthusiasts in our area, she could not find any groups, so she decided to start her own. In 2018, Bethany began the Philly Mycology Club to share her love of fungi with others. The group provides free educational programming at local environmental centers and hosts group hikes, workshops, and trash clean-ups year-round!

After sharing how she became interested in fungi, Bethany gave a broad overview of the fungi kingdom and parts of fungi. Fungi come in all shapes and sizes. On Haverford’s campus, you can find fungi as big as the giant puffball, which sometimes reaches over 50 inches in diameter, to as tiny as the single-cell yeasts that inhabit the Arboretum’s soil. The largest living organism on the planet is actually a fungus called Armillaria ostoyae or a “honey mushroom,” which is believed to be about 2,400 years old and covers over 2,000 acres! A mushroom is actually only the fruiting body of the fungus, which is meant to disperse spores, and most of the fungus is not visible. Fungi have fine filaments called mycelia that form complex, underground networks. The mycelium allows the fungus to break down decaying matter and absorb nutrients, and some fungi form symbiotic relationships with plants via these mycelia highways.

One of my main takeaways from the session is that the fungal kingdom is very large and diverse. In any given location, fungal species tend to outnumber plant species by a factor of 6:1. Although we commonly think of fungi as being closely related to plants, they are actually more closely related to animals! Fungi are heterotrophic, which means that they cannot produce their own food as plants can. There are three main types of fungi: saprophytic, parasitic, and mycorrhizal. Saprotrophic plants gain nutrients by breaking down dead plant matter while parasitic fungi can attack a living host, but this type of fungi is relatively rare. As I mentioned before, some fungi form mutually-beneficial relationships with plants. Mycorrhizal fungi form important bonds with trees, helping the tree soak up water and minerals while it receives sugars from the tree. You can read more about fungi’s relationship with trees here!

Once everyone had an understanding of what fungi are, Bethany took us around the Arboretum to go hunting for mushrooms! We only had to take a few steps, and we had already found some tiny mushrooms in the grass near the Facilities Building. Throughout the tour, Bethany gave us tips on how to find fungi in the wild. Mushrooms can be found in forests, grassy areas, mulch beds, and even potted plants. You will find mycorrhizal fungi near large, mature trees and saprotrophic fungi on decaying wood. One of the best times to look for fungi is after it rains. Some fungi can pop up within the span of a few hours after getting some water, such as inky caps!

There are many tricks you can use to help you identify mushrooms. One of the most important identification characteristics is the hymenium, which is the part of the mushroom that produces spores and can take on many forms. Other parts of mushrooms to analyze include the gills, pileus (cap), stipe (stalk), annulus (ring on the stipe, remnant of a partial veil), and volva (cup-like, remnant of the universal veil). Bethany told us that you can tap the mushroom to release the spores and analyze their color as an identification tool. Also, sometimes destroying the mushroom helps you with identification! Bruising characteristics are a helpful tool when identifying mushrooms. During our mushroom foraging adventure, we also engaged our other senses to help us identify mushrooms. Some of the mushrooms felt soft, like the wood ear, while others felt wet and slimy. I also engaged my sense of smell, and interestingly, one mushroom smelled like a grape-scented marker!

You can also have the wider foraging community help you in identification by snapping some pictures and then posting them to iNaturalist, a social network that enables community members to map and share biodiversity in their region, or one of the many fungi-foraging Facebook groups! Bethany said to be sure that you take a picture of both the top of the mushroom and the underside, which is usually where the gills are located. This is helpful for identification purposes. Bethany also suggests taking a picture of the mushroom in situ, meaning in the place it was discovered, which can also be useful for identification.

Although mushrooms often have a bad reputation, Bethany wanted to dispel some of these misconceptions about this mysterious group. People often believe that most mushrooms are toxic, but the toxic ones are in fact very rare. Also, some people believe that it is wrong to pick mushrooms or destroy them to aid in identification. However, mushroom foraging is actually a sustainable practice when people follow basic foraging etiquette, such as not trampling forested areas. Picking mushrooms can actually aid in the dispersal of the fungus’ spores! Before Bethany ended the foraging walk, she shared various resources with us so that we can learn more about fungi and have more tools to aid in identification, which are listed below. I really enjoyed hunting for mushrooms, and I hope you can also have your own fung-tastic foraging adventure!