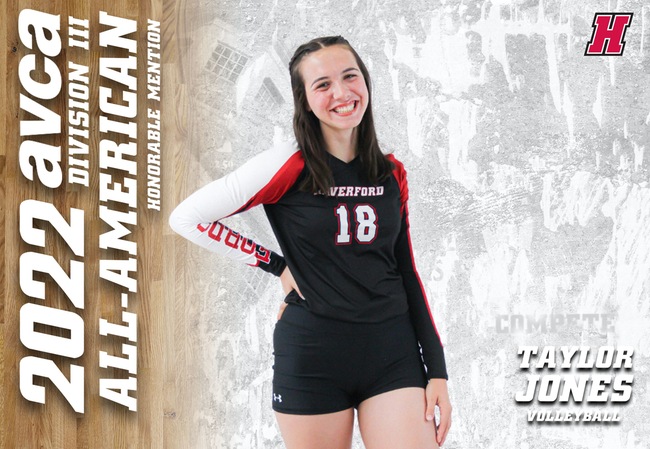 Jones is the 12th AVCA All-American in program history, and joins teammate Juliet Young, who earned the honor a season ago, in earning the distinction after an All-Region campaign.

Jones, who picked up Co-Defensive Player of the Year honors from the Centennial Conference earlier this week, posted a breakout sophomore season in 2022. The Yorba Linda, Calif. product earned her second All-Centennial Conference nod in as many seasons after leading the conference in hitting percentage (.387), and finishing second in blocks per set (0.99) and third in total blocks (86). Haverford's primary blocker finished the season ranked 17th in Division III for hitting percentage, and 47th in blocks per set. Jones' .387 hitting percentage was also the second-best all-time in Haverford program history, behind just Steph Frank's 2000 season in which she tallied a .388 percentage for the Fords.

Jones picked up the inaugural CC Defensive Player of the Week honors right out of the gates as Haverford sprinted out to a hot start to anchor through the first weekend of the season.  Jones added 21 total blocks in four matches at the Haverford Invitational, picking up tournament MVP honors in the process as the Fords went 3-1 to start the season, with wins over Cabrini, Stockton, and New Jersey City.