The associate professor of political science gives us a tour of her office.

Associate Professor of Political Science Susanna Wing was a French major at the University of Wisconsin who found herself chafing at the idea of following in the footsteps of her French professor father (Nathaniel Wing ’59). “I was a teenager. I did not want to study what he taught, like French poetry, Baudelaire and Rimbaud,” she says. Then she took a course on Francophone African literature and found her destiny. “I just thought, ‘Wow, this is a world I know nothing about. There’s so much to learn here.’ ”

Wing went on to get an M.A. in African area studies and a Ph.D. in political science at the University of California, Los Angeles. She joined the Haverford faculty in 2002, and has become an internationally recognized and widely published expert on Mali. Since armed conflict began in that country in 2012, Wing has been sought by the media for her analysis. She also frequently serves as an expert on women’s rights for asylum cases, and has conducted fieldwork in Mali, Niger, Benin, and Nigeria. She teaches a wide range of courses on comparative politics and government, and during the spring semester she’ll be teaching a course she developed on a theme close to her heart: African politics and literature.

➊ Hand-drawn map of Africa: That map was made by a student for Rob Mortimer, who was a former political science professor here and an Africanist. I got it when he retired. It’s signed: “Jim Marquarat 1987.” There are some interesting things going on in that map which I have never quite understood. I think some of the shading is supposed to be ethnic populations, but I honestly don’t know.

➋ Toy cars and trucks: These were handmade in Mali. One is made from a powdered milk container. The little dump truck is made from a tomato paste can. In Mali, people do something with every little thing. Nothing goes to waste. 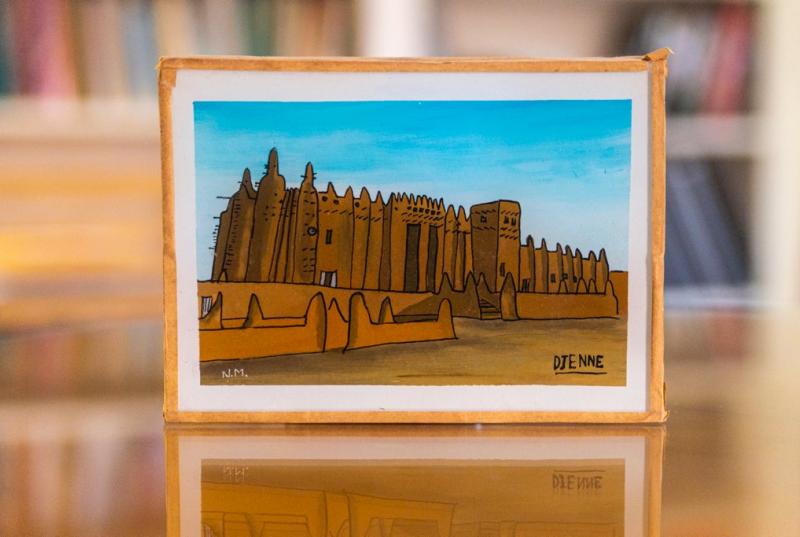 ➌ Painting: This is a photograph I took that a friend of mine in Mali turned into a painting on glass—they do a lot of that in Mali. It’s of the famous mud mosque in Djenné. The local architecture uses mud to build. And they renew the mosque every year. The entire community comes out for it. They climb up on wooden scaffolding with buckets of this mud mixture that they put on with their hands. It’s an incredible community process.

➍ Photograph: That’s my son Luca when he was little. He is now in the fifth grade. He’s with our dog, Sebastian. 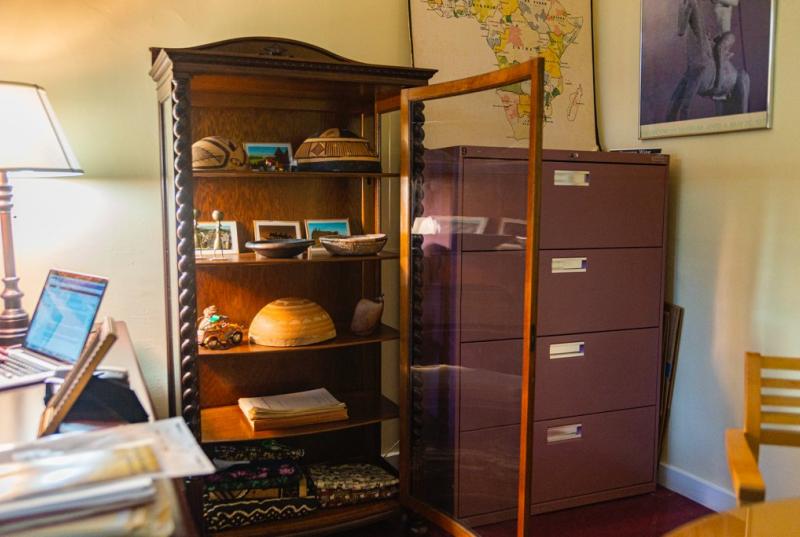 ➎ Curio case: Those are my treasures. That’s a carved gourd from Mali. That one was made for tourists, but they’re also used locally in cooking. Sometimes you’ll go to a village and somebody might offer you fresh milk, and they’ll pour it in a bowl like this and pass it around, and everybody is supposed to drink from it. The baskets are from Nigeria, and I have all sorts of African cloth on the bottom shelf. It’s stuff that people have given me or that I bought over the years.

➏ Papers from a 1960 conference in West Africa: These belonged to [Professor Emeritus of Political Science] Harvey Glickman. One of the things in there that blew my mind is a transcript of a speech given by [Congolese leader] Patrice Lumumba [who was later assassinated]. This is a reminder of the legacy of the person who taught African politics here before me. Harvey was of a generation of people who were there at the time of independence, when everything was changing. That’s where my interest in African politics came from: being taught by people who were there in the 1960s or the 1950s, teaching at the universities, and meeting the people who were soon to be presidents. 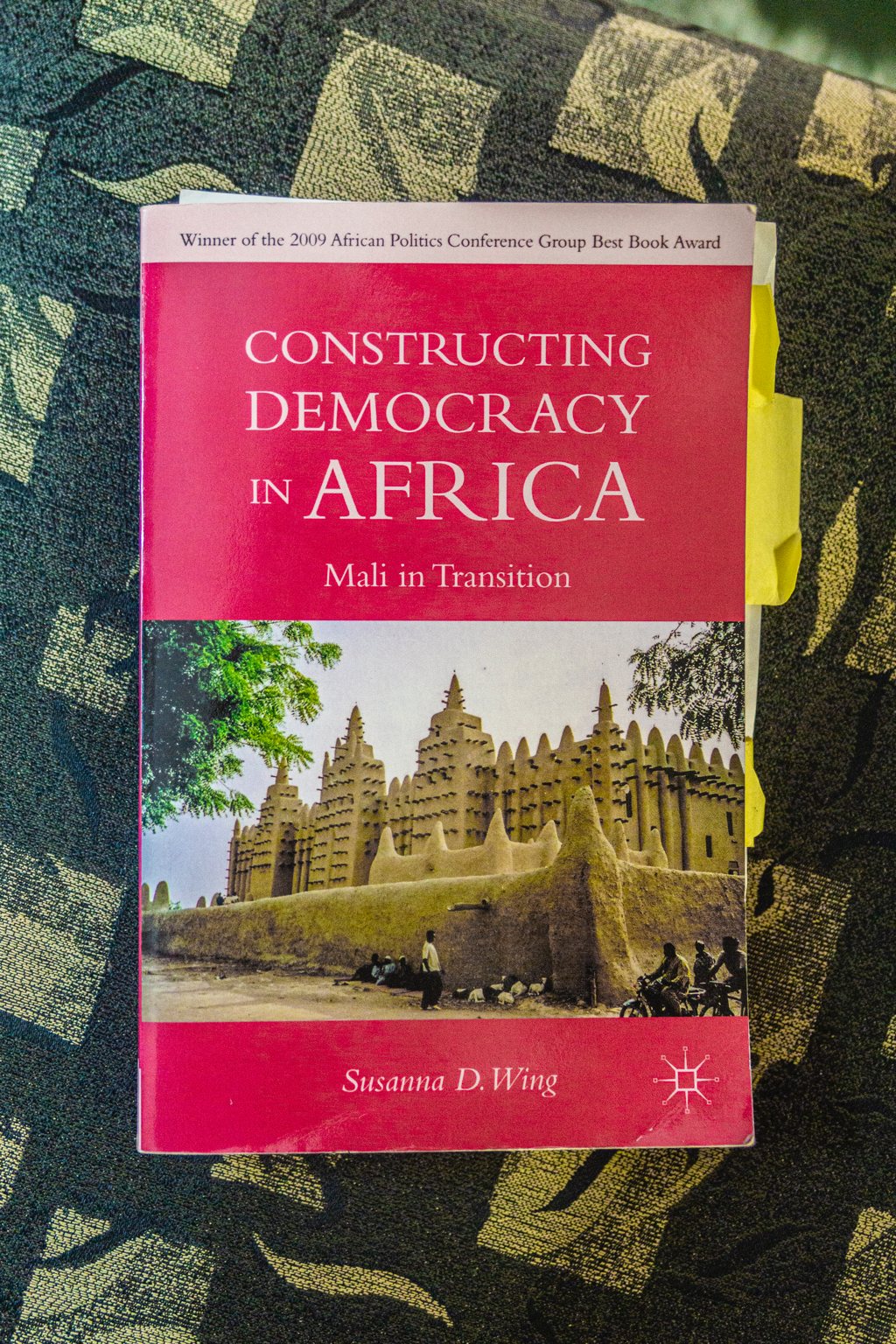 ➐ Wing’s 2010 book, Constructing Democracy in Africa: Mali in Transition: The early 1990s was a time of exciting transition toward democracies in Africa, with people overthrowing oppressive regimes. My book is about how people came together in Mali, in what was called a national conference, to design and build democracy. The sad thing is, the country is now dissolved into war in the North. There’s a lot that they tried to do, and it was very hopeful, but there were also signs along the way of things that weren’t going to turn out so well. Sadly, that’s what ended up happening. 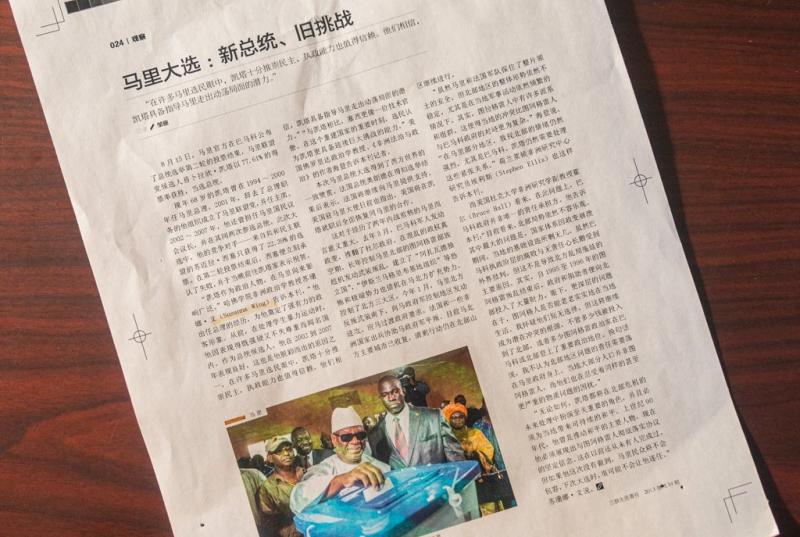 ➑ Chinese magazine interview with Wing about the situation in Mali: I get interviewed about Mali a lot, and I struggle to say things to help people understand what is going on there. At the same time, there are real people—oftentimes people I know—on the ground dying, fleeing their homes, their lives threatened. I’ve been studying Mali for 25 years, and I feel a responsibility to speak about what is happening, so people don’t spin it as “ethnic violence in Africa” or “oh, those Muslims … ” I don’t want that discourse to happen. I need to make sure people understand the historical roots and the real politics of what’s going on rather than the shortcut answer. —Eils Lotozo