The professor of religion gives us a tour of his office.

When Ken Koltun-Fromm ’88 was a religion major at Haverford he remembers studying with then-professor David Dawson. “He was my mentor,” says Koltun-Fromm. “He was the person I wanted to become.” And so he has. In 1997, in a perfect bit of symmetry, Koltun-Fromm became a Haverford religion professor. Since then, he’s been teaching courses in modern Jewish thought and culture, as well as material studies. His course “Material Religion in America,” for example, examines the way Americans express their religious identities through dress, objects, and rituals.

During the spring semester, he co-taught a new course, “Reading Comics and Religion,” with Swarthmore Professor Yvonne Chireau, which looked at narratives of the sacred in comics and graphic novels. The course included a lab component, led by graphic novelist JT Waldman, and the final project required students to produce their own religious comic narratives. Those works went on display during “Sacred Texts and Comics,” a two-day symposium organized by Koltun-Fromm that drew scholars from around the country to campus in May.

The author of four books, including Material Culture and Jewish Thought in America (2010) and Imagining Jewish Authenticity: Vision and Text in American Jewish Thought (2015), Koltun-Fromm lives on College Lane with his wife and fellow religion professor, Naomi Koltun-Fromm, and their three children. 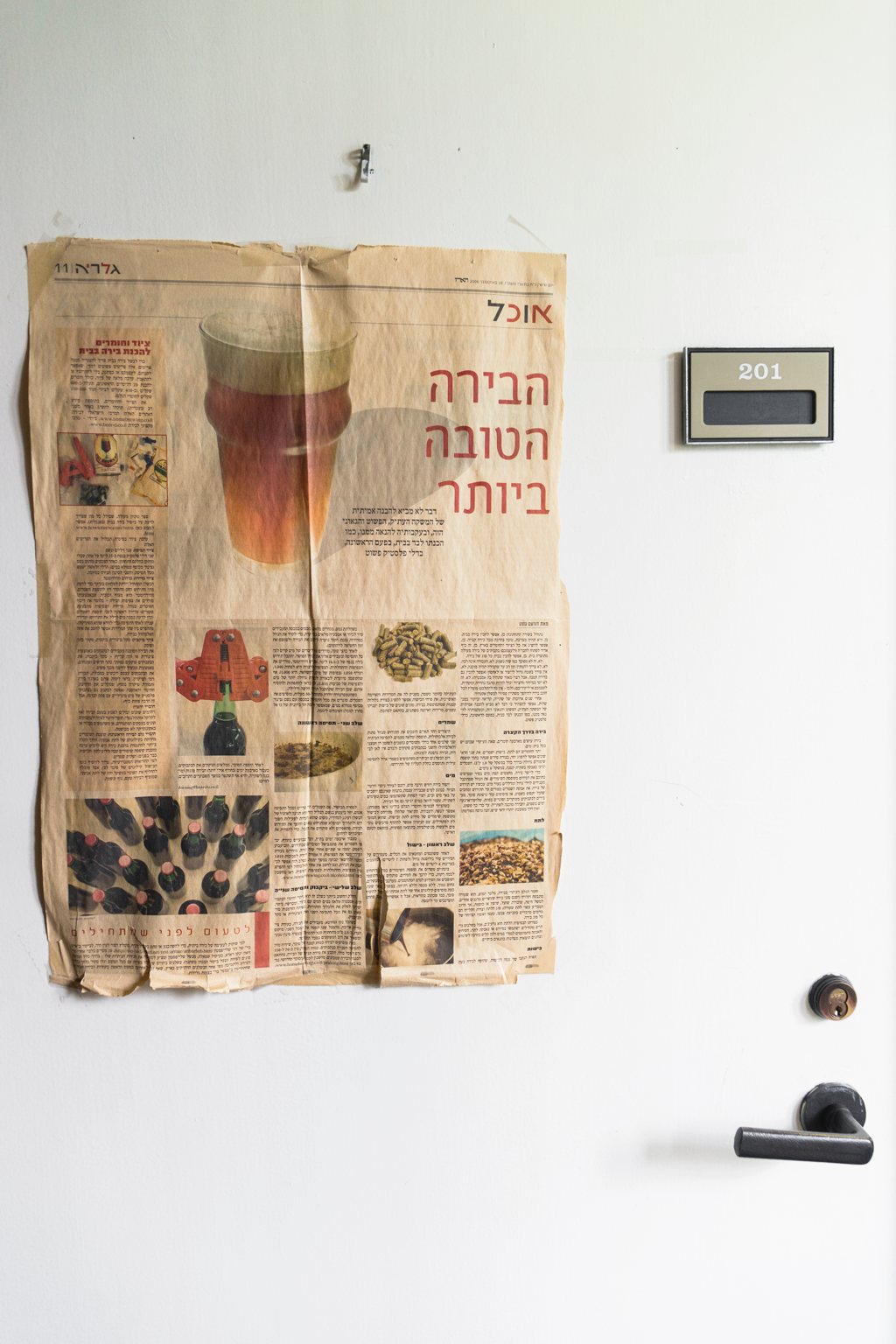 1 Israeli newspaper article on beer brewing: I make beer at home, so when I was on sabbatical in Israel I cut that article out. Sometimes [Professor of Biology] Rob Fairman and I brew beer together; we’ve made stouts and porters, and we just made a nice pale ale. We’ve been fantasizing about building a little beer-making industry in our backyard and doing this in our retirement. 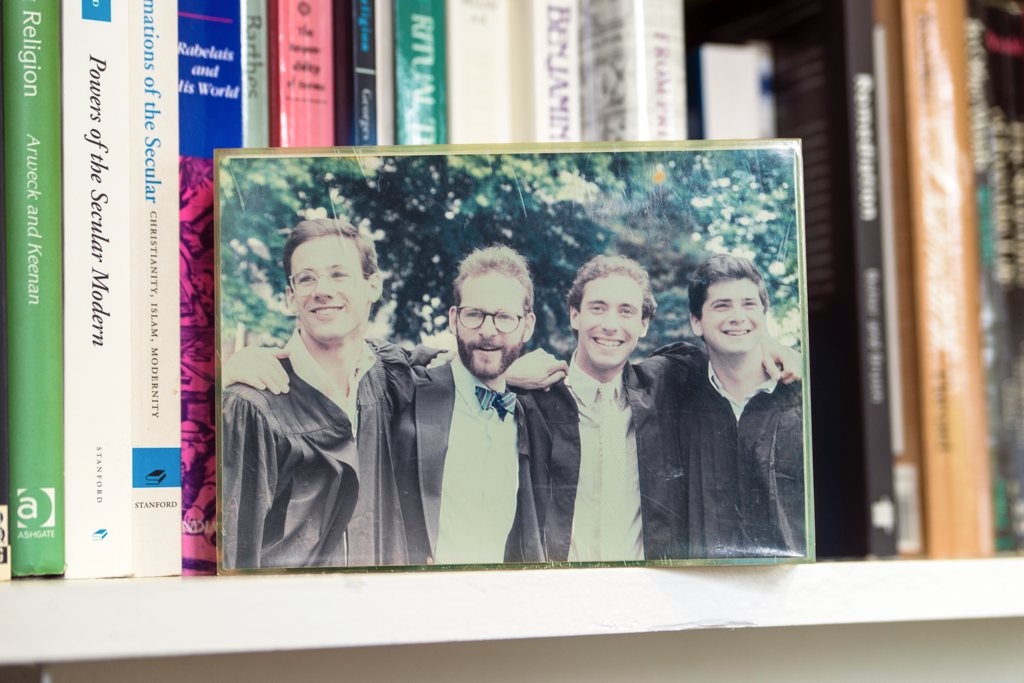 2 Haverford graduation day photo: That’s Chris Berner ’89, who is a lawyer in New York City; Luke Weisberg ’87, he lives in Minneapolis and works in public policy and housing; Chris Edwards ’88, he’s an oceanographer now, at Santa Cruz; and me. Every two or three years we get together somewhere for a weekend. We usually rent a house. It’s a way of staying in touch, but it’s kind of like a therapy session in a way. We’re all in the same place in our lives. 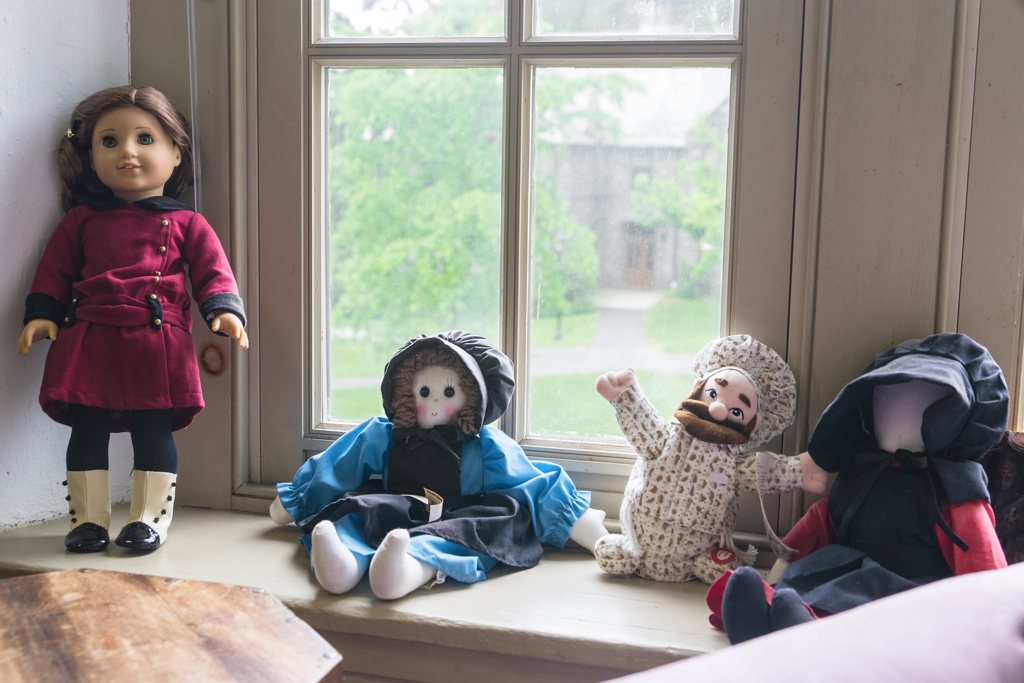 3 Doll collection: Those were used in final projects for my “Material Religion in America” course. They were a way for students to talk about some of the things we were focusing on, such as the various meanings and functions of clothing. One of the dolls is in traditional Amish dress, one is called “The Dancing Matzoh Man,” and one is from the American Girl series—she was supposed to be a Jewish immigrant, but there was this whole controversy about the color of her hair and what she should be wearing. 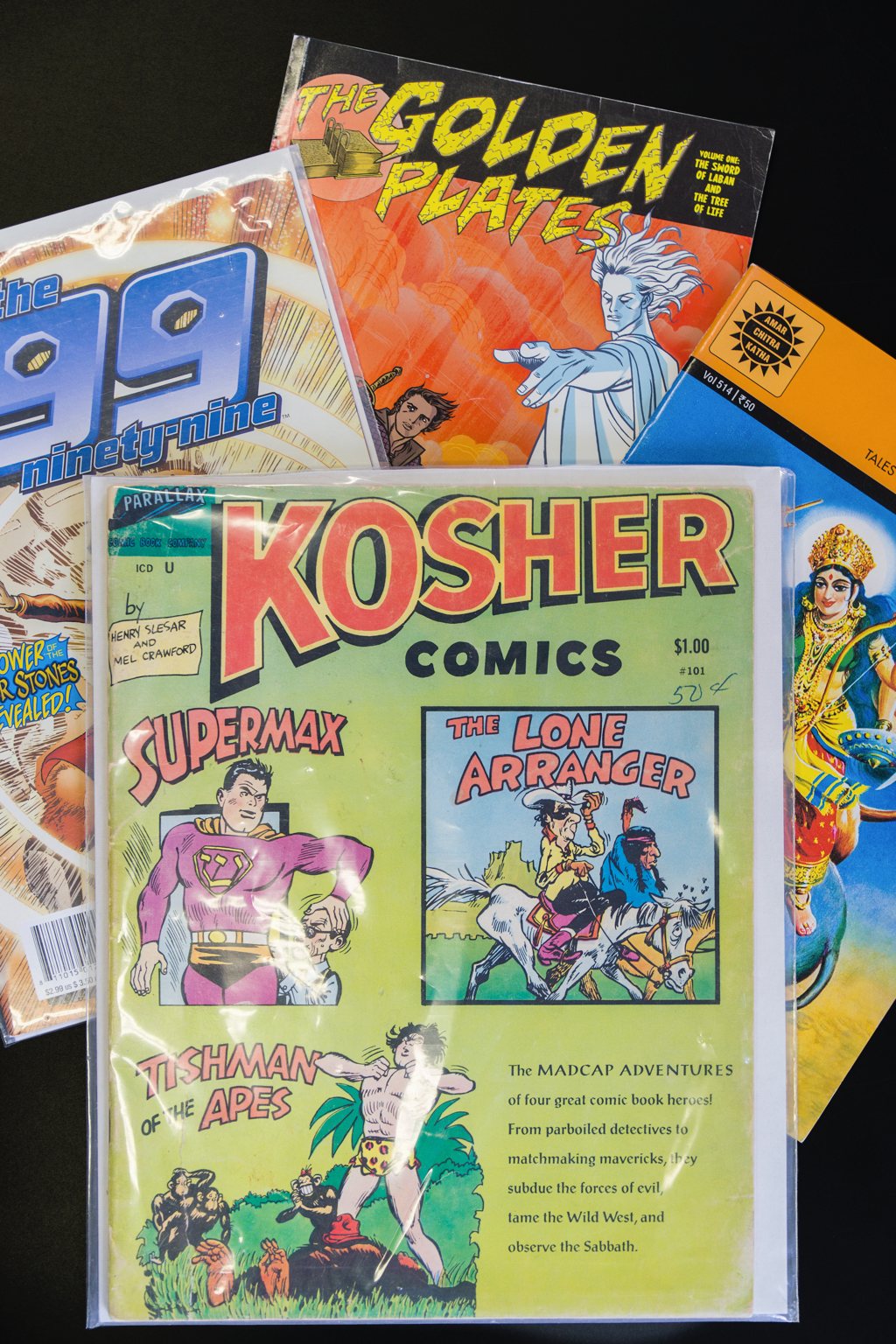 4 A few of the religion-themed comics he has collected: I’m doing an edited book with the curator of the Israeli Cartoon Museum that’s about sacred texts and comics. There are comics on Hinduism, Buddhism, Judaism, Christianity … I’m writing an essay for that book on the use of calligraphy to orientalize the other in Craig Thompson’s graphic novel Habibi. I’m writing it with a student (Maddie Backus BMC ’17). This is the first time I’ve done that, and it’s going pretty well. 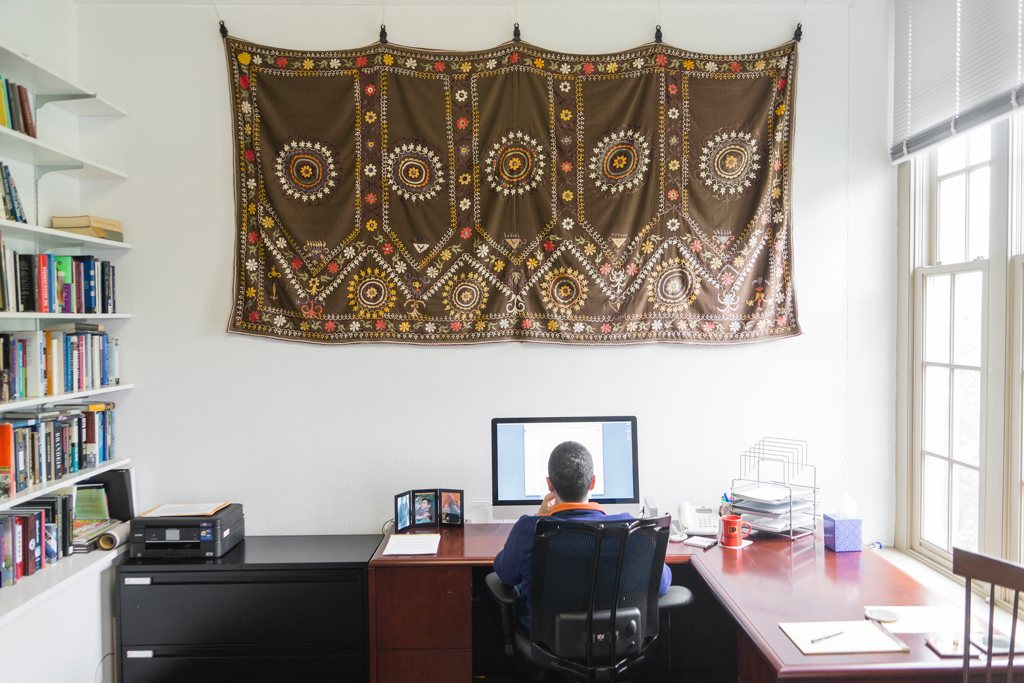 5 Muslim prayer rug: My parents had it. They didn’t want it, and I always liked it. Most likely it came from my uncle who lived in Afghanistan and Indonesia for a while. He was a medical doctor who did a lot of work in the developing world on preventive medicine. 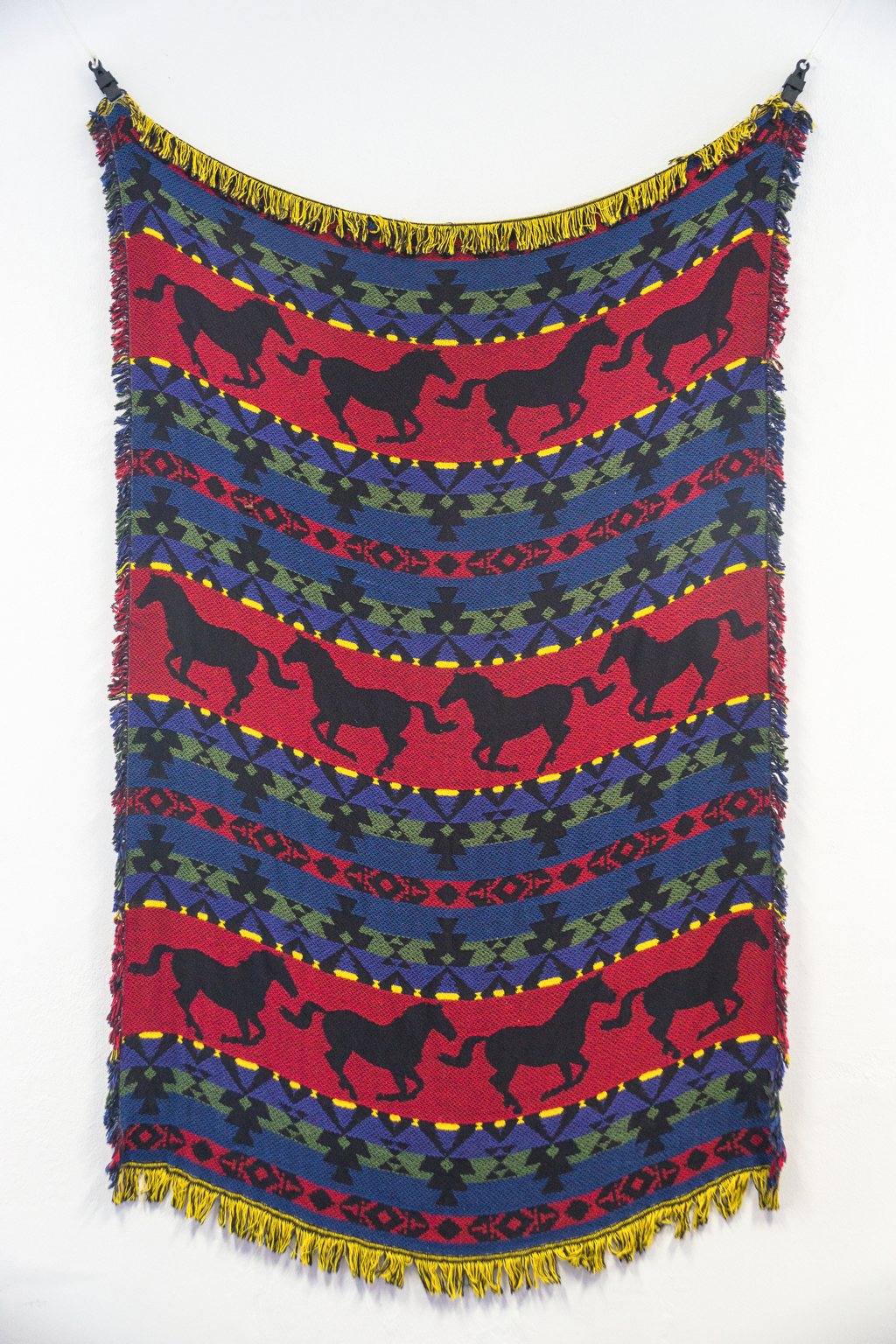