The associate professor of history gives us a tour of his office.

As an undergraduate, Associate Professor of History Darin Hayton majored in chemistry, which kind of explains the scholarly path he eventually took as a historian of science. Hayton, who earned his Ph.D. in history and philosophy of science at the University of Notre Dame, teaches an introduction to the history of Western science, as well as courses on the scientific revolution, plagues and epidemics, and the history of museums.

A noted authority on astrolabes, Hayton published An Introduction to Astrolabes as an eBook (available from iBooks), which connects to his passion for bringing the history of science to a broader audience. In that vein, he’s been a speaker at public events such as the Philadelphia Science Festival and offers accessible writings on the history of science on his blog (dhayton.haverford.edu/blog), exploring such subjects as “the uses and abuses of Isaac Newton” in media reporting on Bitcoin and the misuse of one historian’s work by evangelicals to bolster claims for the “historical reliability” of the Bible. He also shared a spec Superbowl commercial (unaired) that took an alchemist’s approach to making your own Doritos.

Haverford magazine editor Eils Lotozo spoke with Hayton in his Hall Building office, which displays some of the “weird stuff” he collects, including a phrenology head, unidentified mechanical devices, an engraved 19th-century invitation to a hanging, and the rotary phone he brought with him when he arrived on campus in 2005 and used until recently, when a new campus phone system put it out of commission. 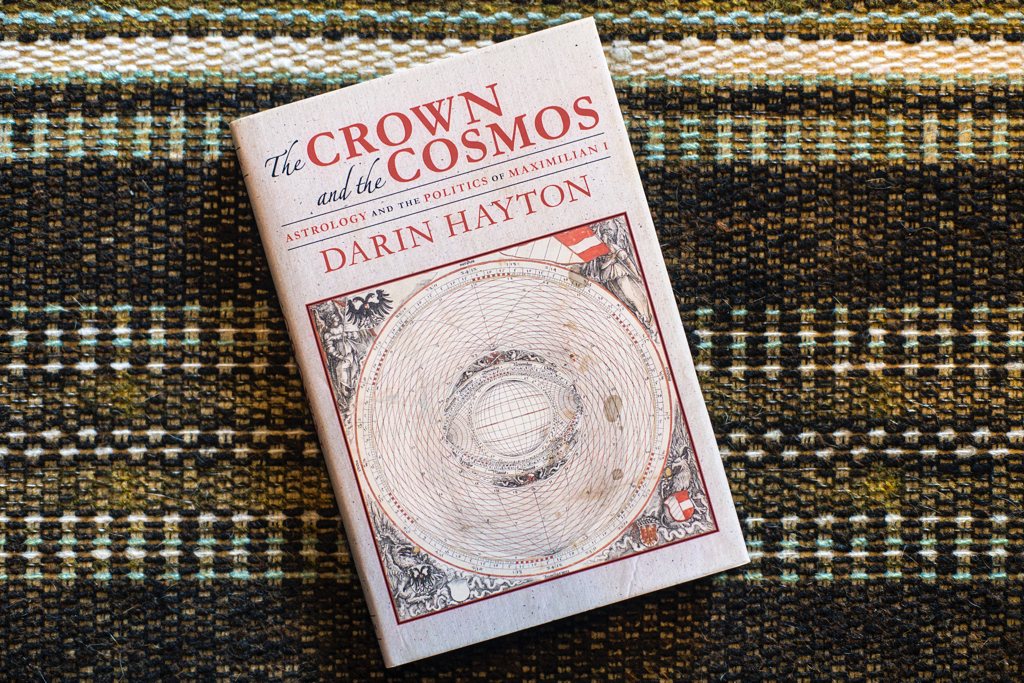 ➊ His book The Crown and the Cosmos: Astrology and the Politics of Maximilian I (2015): It’s about the social value and assumed intellectual authority of the science of astrology, and how the Habsburg emperor, at the end of the 15th century, used it as a political tool in the Holy Roman Empire. His was an elected position, always under threat from the local princes and dukes. But Maximilian was innovative in trying to subvert their resistance by enlisting broader swaths of the empire. The case I try to make is that in this process of expanding what it meant to be a political leader, astrology played a fundamental role. 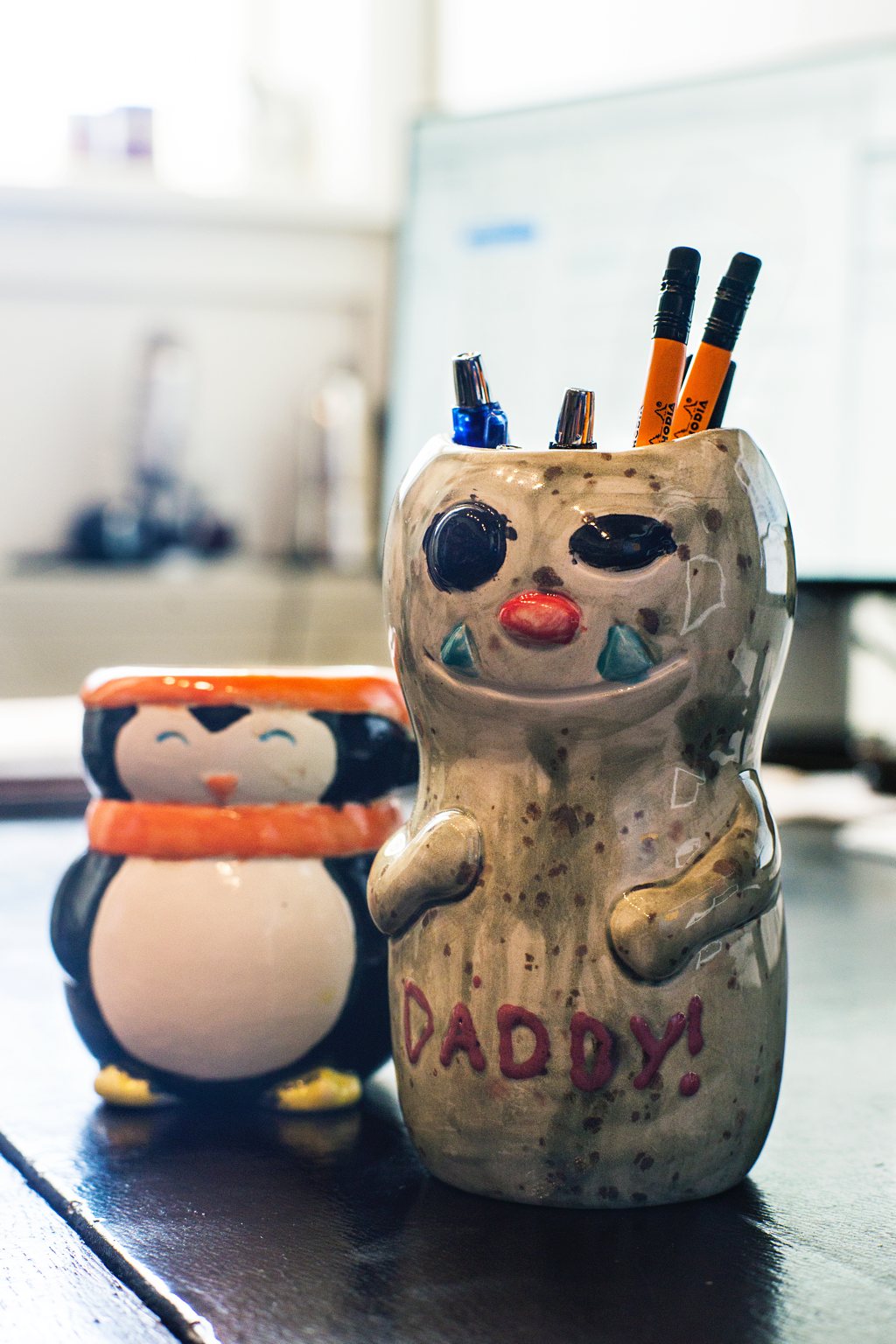 ➋ Cups: Every Christmas I say to my kids, don’t buy me anything. Make me a coffee cup. So my son, Pierce, who’s now 16, was into penguins, and he made the coffee cup. As I recall, my daughter, Zöe, who’s 10, made the pen cup. I think it’s a monster. [Hayton’s wife, Catherine, works at a Center City executive recruiting firm.] 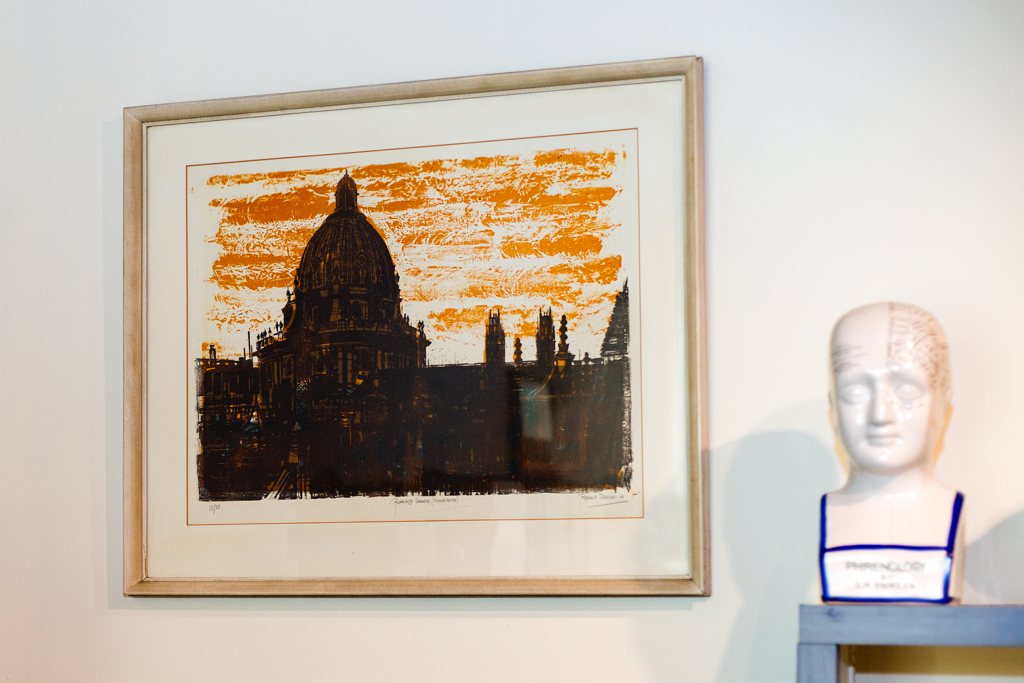 ➌ Print: That’s the Radcliffe Camera, an iconic building at Oxford University. Before I came to Haverford, I had a research appointment at Oxford, and I worked just around the corner from there at the Museum of the History of Science. [Former Haverford history professor] John Spielman gave me that print. He was a good friend, and he’s now passed away. He also worked on the Habsburgs, and we had a lot in common intellectually and otherwise. Coincidentally, I now live in John’s old house near campus because he sold it to us. But I used to walk over a couple of times a month to have coffee— and really good finger foods in the afternoon— and talk to him about Habsburg stuff. It was fabulous. 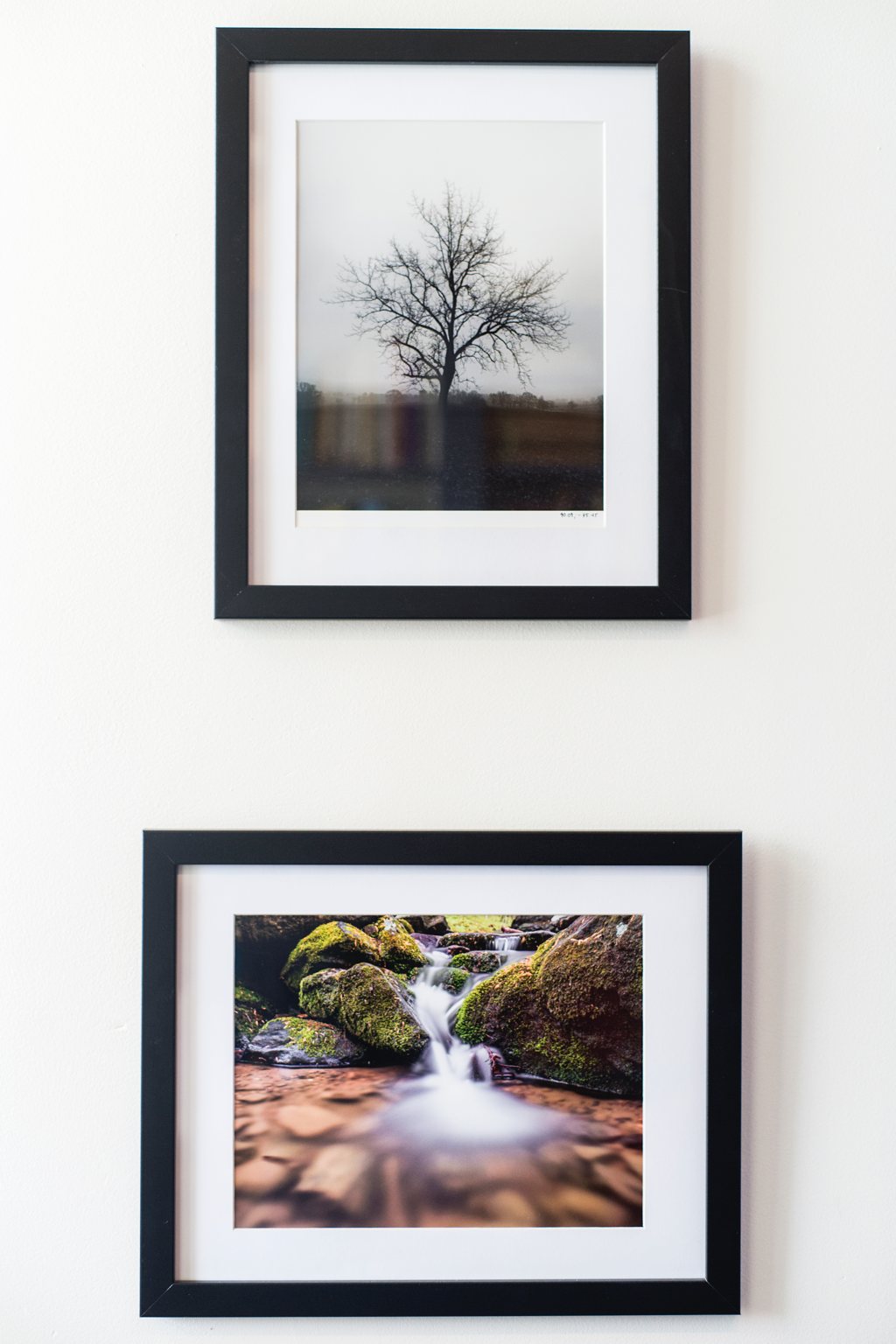 ➍ Photographs: The tree shot I took at Valley Forge, and the other was taken at Ridley Creek State Park. I spend a lot of time hiking, backpacking—often out West—and taking these photographs. I spend way too much of my time outside wandering around with a camera—or, actually, not as much time as I’d like. I keep a camera in my office, and periodically, when I’m motivated and I need a break, I just grab it and wander campus. 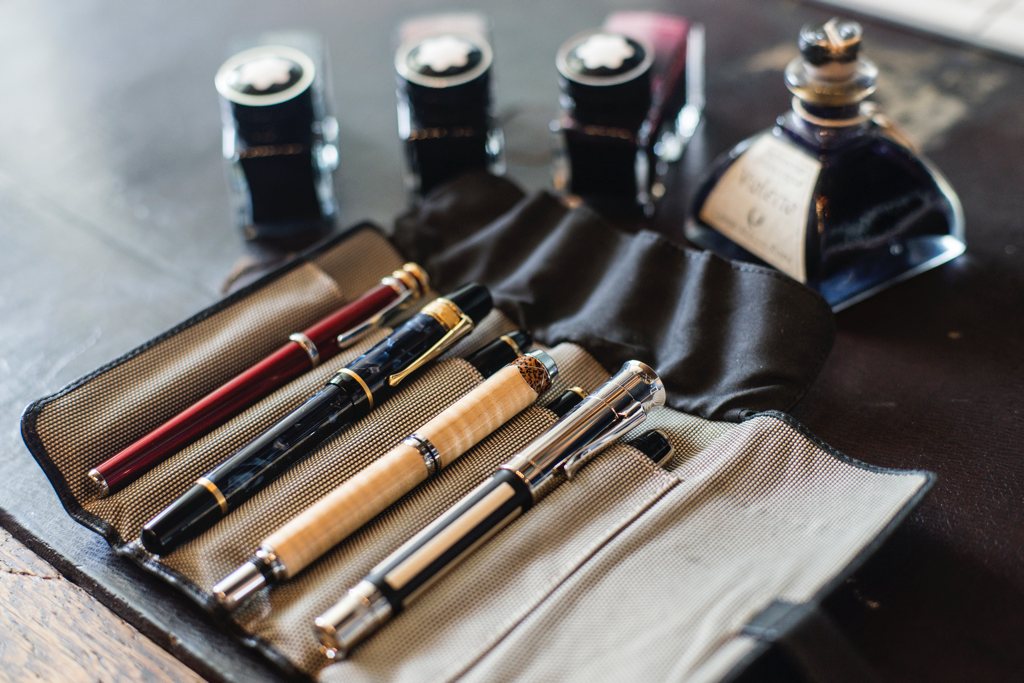 ➎ Fountain pens and ink: I do nearly all my writing with fountain pens. My fountain pens all have colored ink that matches the barrels, and I have way too many of them. I have an Edgar Allan Poe limited-edition pen that someone gave me, and a wooden one that was handmade by a guy in Arizona There’s a real tactile pleasure in writing with a fountain pen, and also my hand doesn’t get nearly as tired because the ink just flows out. 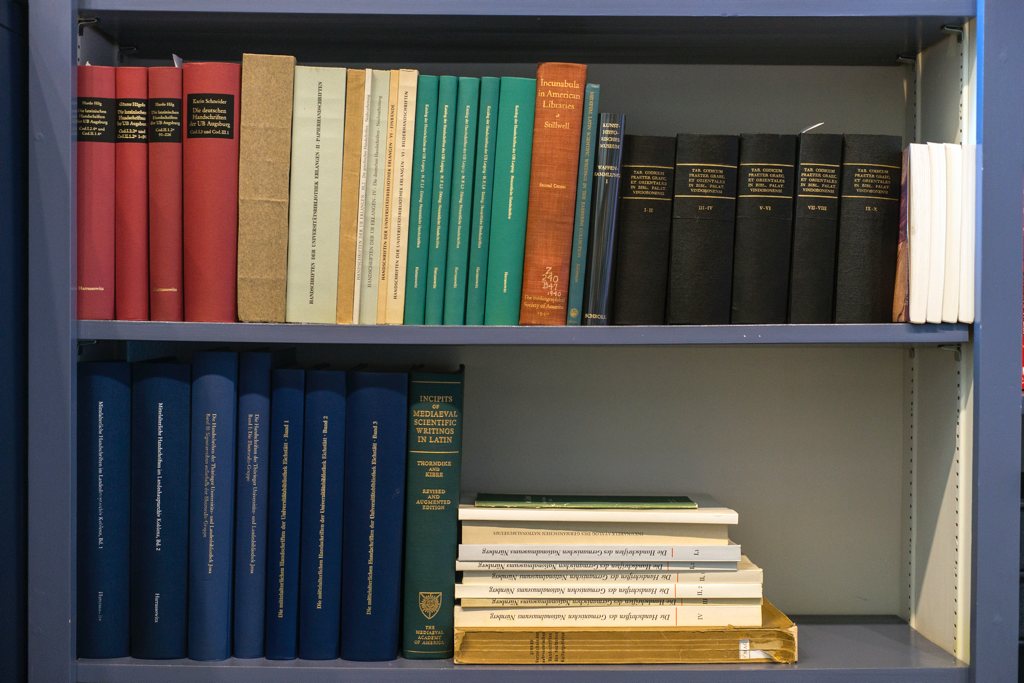 ➏ Books: Those are catalogs of manuscript collections from European libraries. Most of what I need for my research is not online. It’s not even cataloged online, and so I buy these catalogs—many of them are reprints of 19th-century volumes— and thumb through them, looking for what I need. With these, I might find out where maybe a tenth of what I’m looking for exists. For the rest, I end up spending lots of time in archives. 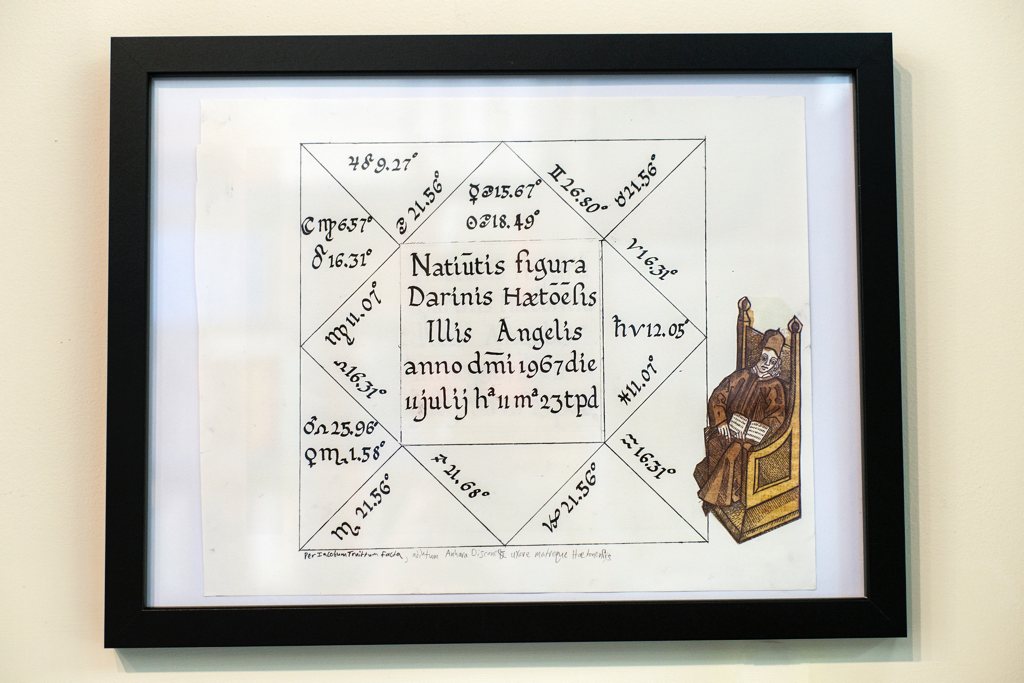 ➐ Horoscope: This is a horoscope that one of my former students, James Truitt ’17, cast for me. He took the time to construct it in the form of what would have been a valid horoscope in, say, 1500. A modern-day astrologer would say there are planets missing—those were the only planets they knew of then. And they might use different methods for dividing up the houses, but they would totally recognize it.

➑ Astrolabe: Astrolabes were the most widely used scientific instrument until the invention of the telescope; and they could be used to tell time, to determine which stars were above or below the horizon, or help cast a horoscope. This is a Gothic-style astrolabe made by a contemporary craftsman in Switzerland for me to use as a teaching tool. I use it a lot in my intro class. I hand it to students and say, “Go out and find out the time.” It’s a nice exercise in thinking about how scientific knowledge is actually so wedded to objects, and it makes students think about time differently.