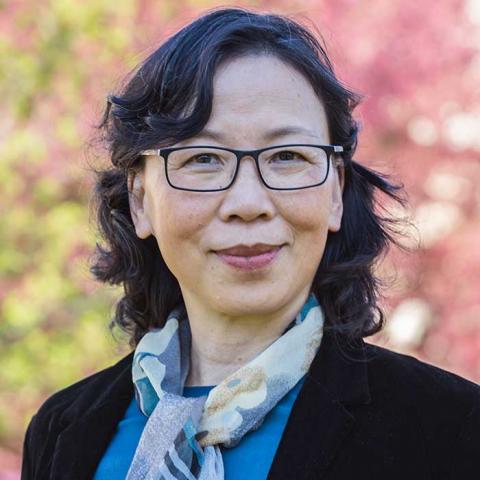 M.A. and Ph.D. in Linguistics, University of Pennsylvania.

I worked at a tea plantation after graduating from high school in China, an experience not too different from that of millions of city youths who were sent down to the countryside to be re-educated by the peasants during the Cultural Revolution (1966-1976). I learned to do everything related to tea making, such as picking tea leaves, cutting and carrying loads of tea branches down the hill to make tea bricks favored by nomadic people, and pressing fresh tea leaves in hot woks to make the fine green tea. The off season for tea making was high season for rice production. So I also worked in rice paddies for planting and harvesting. I even experimented with some enterprising peasants to start an orange orchard although we didn't get very far with that initiative. I went to college when China resumed the national college entrance examination after a ten-year hiatus. My education took me all the way to Bryn Mawr College and then the University of Pennsylvania where I followed my passion in studying linguistic phenomena, particularly the underlying patterns, from a theoretical perspective. In 1989, I came to teach at Haverford College, where I have held the chair of C.V. Starr Professorship in Asian Studies since 2004. Prior to coming to Haverford, I taught for a number of years at Swarthmore College.

My research interests center on the syntax/semantics interface and comparative linguistics. Past work concentrated on some of the fundamental linguistic relationships such as quantification, modification, and coordination. I also worked on event semantics. Recent work has taken me further in applying some mathematical logical tools, such as the Skolem function, to provide a unified account of some seemingly unrelated phenomena. In my dissertation, which was later turned into a book, I argued that distributive universal quantification is a double-variable affair, namely the essence of distributive universal quantification is that for every x there is a y, not a single variable affair as represented in the standard predicate logic. Skolemization of universal quantifiers results in making the value of y depend on the value of x. In a recently completed paper titled "Skolemized Topicality for Indefinites and Universal Quantifier mei­-Phrases in Chinese," which has been accepted for publication, I argue that the mechanism of the Skolem function is not intrinsic to the universal quantifier itself in Chinese; rather it resides in the topic position in this topic-prominent language, as opposed to English. This new conception allows me to not only account for the subject/object asymmetry of the universal quantifiers in Chinese, a phenomenon not seen in English, which is a long-standing puzzle, but also to explain how indefinite nominals in the topic position receive specific/referential interpretations: It is simply a case of the Skolem function picking out a particular member from the set denoted by the predicative indefinites. In other words, we get a Skolem constant! This Skolemized topicality theory reveals that the two seemingly unrelated phenomena in Chinese, namely topical universal quantifiers requiring pairings of two variables, and topical indefinite nominals receiving a referential interpretation, might be the manifestations of the same underlying mechanism. As a theoretical linguist, I find this research result as satisfying as it gets. It suggests that natural language not only has first-order logic; it might even have higher-order logic as its formal mechanism, to an extent wider and more common than previously thought. I share my passion for research with all students I teach, and I teach with passion in both theoretical linguistic courses and Advanced Chinese courses on multiple topics, including China's Cultural Revolution, which I will teach for the first time in the fall of 2021 to mark the 55th anniversary of the onset of ten years of turmoil and carnage.