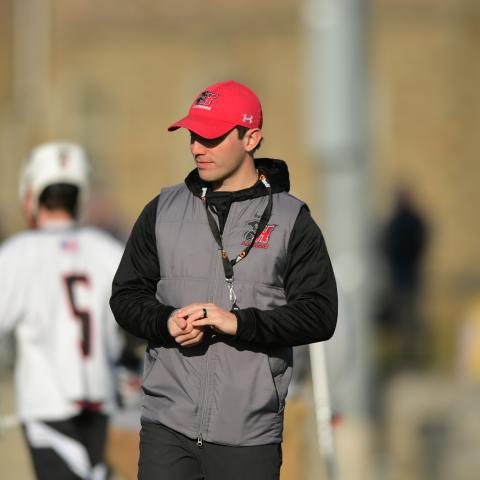 Nick Taylor is in his second season as head coach of the Haverford College men’s lacrosse team. During his first year with the Fords, Taylor became just the second coach in program history to lead the team to a pair of top 10 victories. Haverford’s on field success came in addition to mentoring Haverford’s William W. Ambler ’45 Award recipient Ben Frost ’19 who achieved the highest cumulative GPA among senior student-athletes. Taylor came to Haverford from Arcadia University where he spent the previous four seasons as head coach.

“I am excited to join a very passionate and collaborative community at Haverford College which I knew was a great fit the minute I stepped on campus,” said Taylor at the time of his hiring. “I am thrilled to work with Haverford’s incredible student-athletes and look forward to continuing the legacy of Haverford lacrosse.”

“Nick’s commitment not only to the team's on-field success but also the development of the whole student-athlete made him an ideal choice to lead the team as it strives to build on its success,” stated Director of Athletics Wendy Smith ’87.

During his time at Arcadia, Taylor’s teams climbed the MAC Commonwealth standings and tied the program’s record for wins in a single season during the 2018 campaign. Four players earned All-MAC Commonwealth recognition under his guidance, while 48 student-athletes were named to the MAC Academic Honor Roll.

Prior to Arcadia, Taylor won two conference championships in as many seasons at Cabrini (2013-14) as the team’s the top assistant coach and recruiting coordinator. He coached 14 United States Intercollegiate Lacrosse Association (USILA) All-Americans, including the 2014 Division III Player of the Year. Cabrini was ranked as high as No. 2 in the nation during his tenure as the 2014 team went 17-2 overall and advanced to the second round of the NCAA Division III Championship Tournament for the second consecutive season.

In addition to his coaching responsibilities throughout his career, Taylor has served in a number of other capacities. At Arcadia, he served as the athletic department’s liaison to the Office of Institutional Advancement. Taylor also served as a coordinator of alumni engagement and annual giving while at Cabrini and was the assistant director of alumni relations and an admissions counselor at Catholic.

A 2008 graduate of FDU-Florham with a bachelor’s degree in communication studies, Taylor was a four-year member of the Devils’ men’s lacrosse program on defense. He served as team captain during his junior and senior seasons, being named a first-team All-Middle Atlantic Conference selection in 2008. Taylor went on to earn his master’s degree in public communication from American University in 2009.