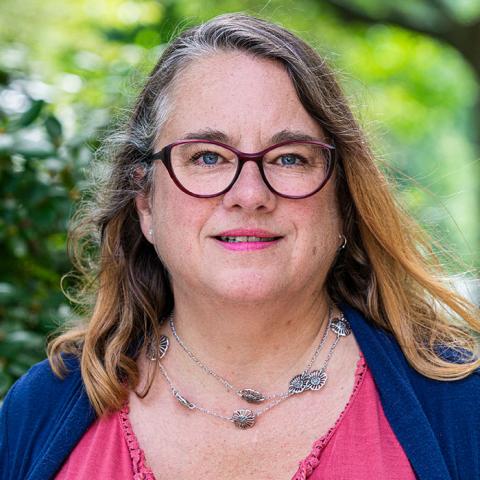 Born in the US but raised in Canada and France, I attended the University of Toronto from 1982-1986, earning a B.A. in English and Latin, and then the University of California at Berkeley, where I earned my M.A. and Ph.D. in Comparative Literature. I am bilingual in English and French and speak a couple of other languages badly, as well as reading Latin, Old English, Old French and Old Norse. I use she/her pronouns.

I teach courses on Arthurian literature, epic poetry, the Apocalypse, Chaucer's Canterbury Tales, modern Celtic poetry and (coming soon to a classroom near you!) Vikings and Victorians. In the past few years, I've directed senior theses for both English and Comparative Literature on topics ranging from Sir Gawain and the Green Knight to Derek Walcott to Hamlet to graphic novels to opium narratives.

I am presently finishing a book called Trojan Time Machines: Translation and Temporality in the Medieval Troy Story.