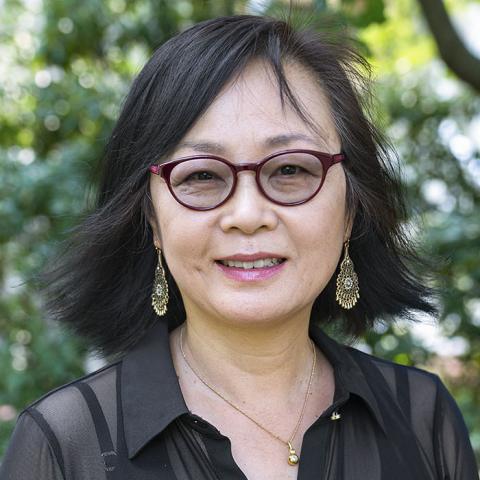 Hee Sook Kim is a printmaker, painter, video artist from South Korea who is currently Professor teaching printmaking at Haverford College in Pennsylvania. She is a recipient of 2017 Innovative Teaching award. She has received a grant from the Pollock-Krasner Foundation,  a Window of Opportunity grant from the Leeway Foundation, an acquisition award from the State Foundation of Culture and Arts in Hilo, Hawaii, an Honorary Mention in the Encyclopedia of Living Artists, and a Merit Award from the Central Pennsylvania Festival of the Arts. Ms. Kim’s prints and paintings have earned her several stints as an artist-in-residence at the Ascona Centro Incontri Umani, Ascona, Switzerland, the Collaborative Press, Los Angeles, California, the Helene Wurlitzer Foundation in New Mexico, the Brandywine Workshop in Philadelphia, Villa Montalvo in Saratoga, California, Millay Colony in New York and the Vermont Studio Center in Johnson, Vermont.  In Japan, her prints and paintings appeared at exhibitions at the Osaka City Museum, the Fukuoka Prefectural Museum and the Doyusha Gallery.  She has also exhibited at the Bronx Museum, the Drawing Center, Asian American Art Center, Bronx River Art Center, and the Queens Museum  in New York, Lincoln Center in Colorado, and the Museum of Natural Sciences at North Carolina.  Additionally, her art has been shown at the National Museum of Modern Art, Seoul Art Cosmos Center in Korea, the Taipei City Museum of Art in Taiwan,  and Le Centre d'Estudis d'Art Centemporari in Barcelona, Spain. Ms. Kim’s pieces are in many collections throughout the United States, Korea, Japan, Taiwan, and Europe.