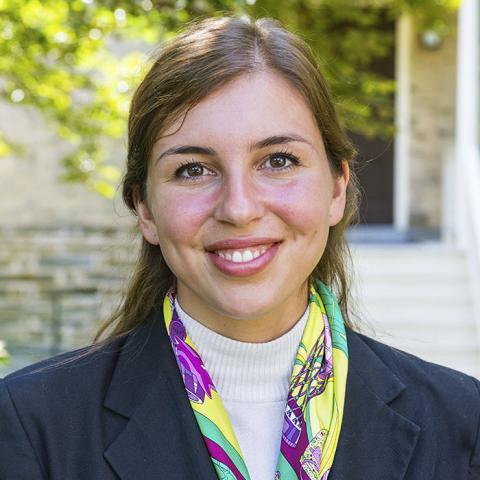 Prof. Silverblank is regularly excited by the untimely trajectories of words and concepts across languages, cultures, and time. She loves deep, slow meanderings of the mind, the kind which are made possible by attentive and curious reading; she loves enthusiastically sharing these intellectual and embodied adventures with her students and colleagues in the Bi-Co.

Hannah Silverblank was born in Philadelphia, where she developed a love of dogs, root beer, fairy tales, music, Star Trek, oil painting, board games, ghost stories, and the stranger parts of life.

Dr. Silverblank unsuspectingly became a student of Greco-Roman antiquity while an undergraduate at Haverford College. After graduating from Haverford with a double major BA in Latin (High Honors) & Comparative Literature (High Honors), Silverblank went on to the University of Oxford, where she received a Master's (with Distinction) and a PhD in Classical Languages and Literature. In January 2017, she returned to Haverford College to teach courses in Greek, Latin, and English. Her doctoral thesis examines the voices and soundscapes associated with monstrous creatures in Greek epic, lyric, and drama.

Prof. Silverblank is at work on a book project that expands her dissertation into a sonically-inflected reconsideration of 'monster theory', as it applies in the archaic and classical Greek poetic context. Her work for this book nourishes and is nourished by her course, 'Beasts, Hybrids, and Giants: Confronting Monsters' (regularly taught in the Writing Program and recently converted into a Comp. Lit./Classical studies seminar).

She's also sneakily crafting a second book on the monster's significant other — the human — with her dear colleague Marchella Ward (Oxford). Ask her why capacity-based definitions of the "human" are troublesome if you want to talk for a long time.

She has also published articles and chapters on classical reception in 20th-21st century poetry and popular music.

She has forthcoming pieces on Anne Carson's receptions of Greek poets (including Homer, Stesichoros, and Sappho); on queer chosen family in Homeric epic; on the monstrous soundscapes of Aeschylus' Oresteia.