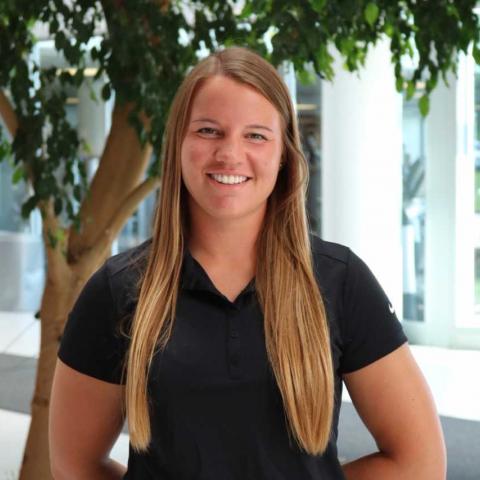 “I am so excited to become a part of the Haverford College community. I can tell Haverford is a special place and its values align well with my own,” said Poppe at the time of her hiring. “I look forward to taking Haverford softball to the next level on and off the field.”

“Kate’s enthusiasm and appreciation for Haverford’s core values were very apparent throughout the search process. Kate’s vision of helping our student-athletes achieve excellence in their academic, athletic, and extra-curricular goals will serve the softball program well as the team looks to build upon its success from recent seasons,” stated Director of Athletics Wendy Smith ’87.

Before her season at Providence, Poppe spent one year as an assistant coach at Rider University where she worked with pitchers, hitters, and infielders. One area in which the Broncs saw huge improvements was in their pitching staff which nearly doubled its strikeout-to-walk ratio from 0.63 to 1.13 in Poppe’s first season. Rider was honored with the National Fastpitch Coaches Association (NFCA) All-Academic Team award that season while 10 student-athletes were named to the Metro Atlantic Athletic Conference Academic Honor Roll.

Poppe’s coaching career followed a standout playing career as a student-athlete at Villanova University. A two-year team captain, she broke Villanova’s career record with 977 strikeouts and finished with a 2.52 ERA. Named the Big East Pitcher of the Year and an NFCA All-Mideast Region selection in 2016, Poppe was a three-time All-Big East selection and tossed five no-hitters throughout her playing career. She was also recognized on the Big East All-Academic Team during each of her four seasons.

Getting her start in coaching while a student-athlete at Villanova, Poppe coached the Pennsbury Gems U18 Gold team from 2014-16. She has also worked as a coach/counselor at College Coaches Skills Camps, Diamond Nation, and Headfirst Camps.