The Office of the Provost established the Quaker Studies Working Group in 2018. The Working Group supports the Academic Study of Quakerism at Haverford College. 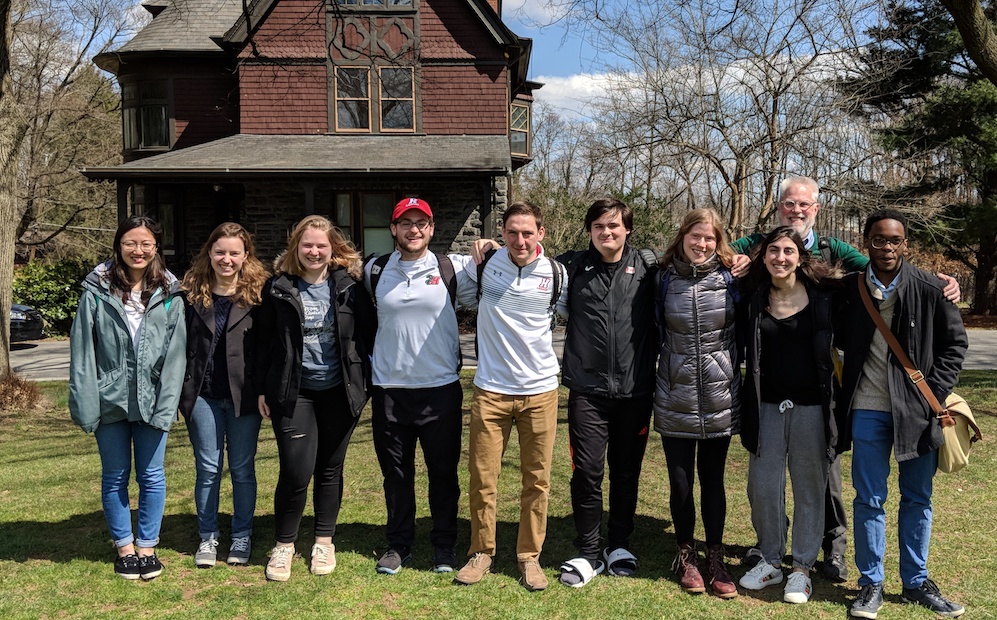 Students from the “Reinventing Quakerism” course visit the house on campus Rufus Jones lived in for much of his life.

The Working Group is made up of professors that teach courses on Quakerism to support the continued Academic Study of Friends at Haverford College. As a historically Quaker institution, the study of the Religious Society of Friends is important in understanding the college’s roots and legacy. Through a wide variety of courses ranging from the role of Quakers in the Holocaust to the History of Haverford, the Working Group aims to help students develop a nuanced understanding of the religious, historical and social aspects of the Religious Society of Friends. As Quaker Studies is not a specific major or minor, Quaker courses are cross listed in various disciplines including Religion, History and Peace, Justice and Human Rights. The Working Group provides opportunities to continue the study of Quakerism to thesis ideas, summer internships, and research positions. The Working Group also meets to discuss the ways in which the college maintains Quaker values and how these values manifest themselves in the lives of the students.

The field of Quaker Studies encompasses a wide variety of methodologies: history, literary studies, anthropology, sociology, gender studies, religious studies, and visual studies, for example. Scholars who work in the field sometimes approach Quakerism with a good deal of skepticism.  The range of questions that scholars in Quakers Studies ask is almost identical to the range of questions asked by scholars who focus on other religious, cultural, social and political phenomena. Quakerism has attracted scholars’ interest for a very long time, and it figures prominently in classic scholarly explorations of religion such as James’s Varieties of Religious Experience, (which was published in 1902). But Quaker Studies as it is practiced at Haverford is a young field: it did not really begin to coalesce until the 1990s.