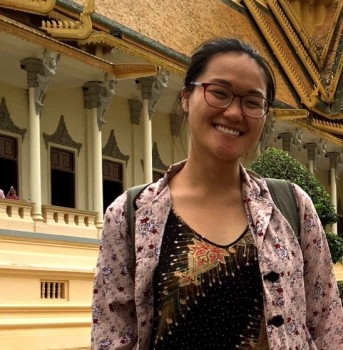 The history major and fine arts minor is in Phnom Penh, Cambodia, interning with Hope For Justice.

Sunny Zheng '16 is in Phnom Penh, Cambodia, this summer, teaching fine arts to teenager survivors of illegal child sex trafficking. Zheng is doing this work through Hope for Justice, a nonprofit that operates across three continents to identify and rescue victims, advocate on their behalf, provide restorative care, and train frontline professionals to tackle slavery. During her Center for Peace and Global Citizenship-sponsored internship she will teach an introductory visual arts class that focuses on observational drawing, perspective, color theory, and painting.

"I am hoping that through this program, my students will be better equipped to empower themselves through visual self-expression and explore their own power to create and imagine," she says.

Zheng is disheartened by the lack of emphasis on arts in the American public school system, and she finds the same to be true in many countries in Asia, including Cambodia.

"Even when thinking about social justice, and the plethora of NGOs in Cambodia, art is almost never considered a necessity," says the history major and fine arts minor. "I want to help change that perception because I believe that the power to create and express one's voice is integral to being a human being."

After returning from Cambodia, Zheng will begin work on her senior thesis on public arts of the Asian American Movement in Los Angeles. She is hoping to include some works by Cambodian immigrants in the area, particularly those made during and after the Khmer Rouge regime.