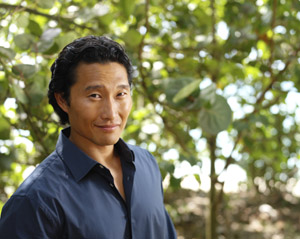 Just a few years ago, Daniel Dae Kim '90 was the celebrity equivalent of the old classmate with the familiar face and the elusive name. Television and movie audiences may have recognized his classically handsome mug from such shows as“24,”“Angel,”“ER,” and“Star Trek: Enterprise,” or films like The Hulk and Spiderman 2, but his moniker wasn't considered“household.”

Now, with the enormous success of the Emmy-winning ABC show“Lost”â€”in which Kim plays plane crash survivor and tormented businessman Jin Kwonâ€”everything has changed. Kim first realized that his star had risen to Elvis-like proportions when, shortly after the show's premiere, he and his castmates traveled to L.A. to participate in a Director's Guild seminar and attended an after-party at a nearby restaurant. Word spread of the cast's presence, and soon throngs of onlookers had swarmed the front and back entrances. Kim and the others were ushered out the side entrance and hustled into their cars, only to have fans surround the vehicles and rock them back and forth.

“That's when I realized,” recalls Kim,“that I was part of something bigger than I'd expected.”

It's safe to say that Kim is having as wonderful a life as Jin Kwon is having a lousy one. Kim has won a Screen Actor's Guild Award as part of“Lost”'s outstanding ensemble cast, been recognized as one of People magazine's Sexiest Men, and even appeared in the 2005 Oscar-winning film Crash. Meanwhile, Jin is stranded on an island in the middle of nowhere that's steeped in mystery and peril, and is trying to preserve his tense but loving marriage with newly pregnant wife and fellow survivor Sun (played by Yunjin Kim). Additionally, he's plagued by painful flashbacks to his former life as the poor son of a Korean fisherman, and as the reluctant henchman of his sinister father-in-law.

Kim didn't know too much about the character of Jin or the series in general when he first auditioned, but he respected the reputation of producers J.J. Abrams (who also helms ABC's“Alias”) and Damon Lindelof.“The producers wanted to build a storyline around the character of Sun,” he says,“and they were looking for someone to play a foil to her.” After reading several of Jin's scenes from the pilot episode, Kim felt that“this character was one I could grasp.”

He won the role but came close to turning it down: He was filming the movie The Cave in Romania when production was scheduled to begin.“Thanks to a week of intense negotiating and the generosity of J.J. Abrams and Lakeshore Productions,” he says,“I was able to take the part.” He elected to move his wife Mia and two young children from L.A. to Hawaii, where the show is shot, instead of leaving them in California and visiting them during breaks.“I had just spent four months away from them in Romania, and I was missing them way too much to do it again,” he says. He loves living in Hawaii, for reasons besides the obvious climate-related pleasures:“Socially and politically, it's a place I can relate to.”

Originally a political science major at Haverford, Kim has always been socially conscious about the roles he accepts. It was important to him that Jin not embody common Asian stereotypes:“I had misgivings about potentially portraying Asians in a negative light.” However, at the start of“Lost”'s first season, Jin's quick temper and seemingly controlling behavior toward his wife drew criticisms from Asian American groupsâ€”criticisms that Kim believes were somewhat justified.

“Fortunately, this show is such a collaborative process,” he says,“that I was able to voice my opinion to the producers and writers, who assured me that they had a long-term plan for the character. They asked me to trust them, and I did. I asked the Asian American community to trust me in turn.”

By mid-season, Jin's layers and complexitiesâ€”his shame concerning his simple roots, his conflict between his dangerous job and his marriage, his enduring love for Sunâ€”had come to light.“That's one of the big advantages of television,” says Kim.“You can watch a character grow with every new episode.”

The show's creative team has taken pains to depict the details of Jin's and Sun's culture with accuracy. This includes requiring Jin's and Sun's portrayers to speak only Korean, at least to each other (Sun has been revealed as an English-speaker; Jin is slowly learning some key words). Episodes focusing on the couple and their past are more than 50 percent subtitledâ€”which hasn't affected the popularity of the show or the characters one bit.“It's an example of how far we've come as a society,” says Kim.

The actor, who came to the United States with his parents from Pusan, Korea, as a child, hadn't spoken Korean full-time since the age of six.“Re-learning it,” he says,“was the biggest challenge of my career. I had to eliminate my American accent, and learn not to be so self-conscious about itâ€”and then I had to think about the acting.” He enlisted the help of his parents back in Easton, Pa., and his co-star Yunjin Kim, and sought out conversations with other Korean-speaking people.

“It's been an incredible opportunity,” he says.“My Korean's never been better.”

Among the biggest fans of“Lost” are Kim's parents, though this wasn't always the case.“Early on, they were concerned,” says Kim.“They knew it wasn't the most positive portrayal of a Korean.” But as the character grew, so did their admiration.

“Now, they love the fact that people within the Korean community will tell them I'm doing a good job,” says Kim, who is especially grateful that he is in a position to make his parents proud.“They've worked so hard to help me get where I am today. It's very special to me that they can share in the success of the show.”

Success and celebrity status have had its perks, but there's been an aspect of fame Kim hadn't anticipated.“Sometimes people have a tendency to think they â€˜own' you,” he reports,“that because they see you every week in their living room, you're somehow a personal friend. That takes some getting used to.” His fan encounters have run the gamut from enthusiastic to exasperating.“Thankfully though, 99 percent of the time, it's a good thingâ€”they're grateful for the work that we do, and they're very sincere about it.”

As fond as Kim is of Jin and the show, his first love remains theater, and has been ever since his Haverford days when he appeared in the play D.D., written by fellow alum Lane Savadove '89. It's a medium that clicked psychologically with him:“I love the freedom of expression that theater allows. Growing up Asian American, I often felt like I didn't have much of a voice. On stage, I not only had a voice but it was actually part of the job requirement to speak outâ€”literally.” Kim created an independent major in theater and political science and went on to receive his M.F.A. in acting from the Tisch School of the Arts at New York University. He still treads the boards when he can, and most recently performed in the Anton Chekhov play Ivanov in New York during a“Lost” hiatus.

Kim's higher visibility has resulted in more film and television offers, but he is still selective about the projects he chooses, and tries to avoid uninteresting plots, weak characters, and stereotypes.“Haverford taught me to question society and to be thoughtful of the way I live my life,” he says.“I look for intelligent, challenging projects, ones consistent with the values I learned at Haverford.”

He includes his current project in this category. Many years from now, when all of the mysteries are solved and the show takes its place in television history, Kim wants people to remember "Lost" as something that challenged perceptions and broke boundaries.“Viewers see that when it comes to different ethnicities, what you see is not necessarily what you get, and in our case, that's a good thing,” says Kim, referring not only to Jin and Sun but also to the character of Sayid (Naveen Andrews), an Iraqi who was once part of Saddam Hussein's army.“It's important to delve beyond media images. It's impossible sum up an entire culture in a sound bite. In a well-written story things are usually much more complex than they seem.”

Kim credits Haverford not only with his conscientious, enlightened outlook on life, but also with his decision to try acting.“Haverford provided an environment where I felt free enough to explore whatever interested me, however non-traditional. It's what encouraged me to try my first acting class,” he says.“If I hadn't gone there, I probably wouldn't be an actor today. The College without a doubt broadened my horizons.”