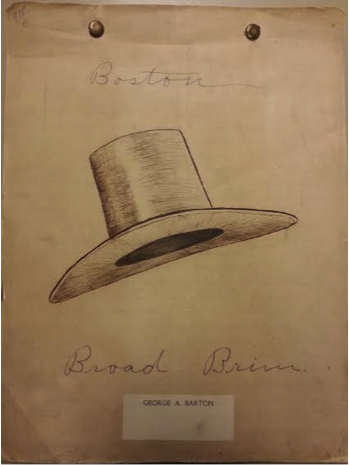 The mystery behind a publication for the Boston Meeting, the Boston Broad Brim, is revealed

This month I have decided to share a fun and rather mysterious item that I unearthed during my cataloging adventures. Working with materials that can be up to three hundred plus years old, I often come across things that I find funny, but which were written in all seriousness at the time. As a result, I was initially confused when I came across an intentionally satirical piece this past month.

The Boston Broad Brim makes her first appearance before you tonight. She was formerly known to you as the Highland Hall News, a weakly paper. But, as often happens to the weaklier sex at a certain period of life, she has changed her name. The days of her youth are past. her growth may be considered somewhat precocious, yet she no longer roams in the broad meadows, no more by the brooke where the swan play to gather flowers or wander in the Woods where the hawkes build their nests to act out the part of a Nutter.

If our paper has become a bride, you naturally look about for her bride groom. There is none. Sad is the fact but nevertheless true. Mr. Boston Broad-brim has departed to that home whence no traveller returns, and she who now hears his name is a poor lone widow. Widows when young like ours are proverbially dangerous. But we beg you not to regard her as such. You will find her moody, sometimes saucy, and coquettish, sometimes ñsmiley round the lips and teary round the lashes,î but in the end agreeable and pleasing. If she hits anyone, you must forgive her, for it is a way widows have. She will appear in your midst semi-occasionally, to solicit contributions for her support, or better still a permanent Holder. She is a very desirable acquisition as a companion as she brings with her no small Frye. Try her and you will find her worth her weight in Gould!

The rest of the volume includes excerpts for a ñChronicleî of Massachusetts, written in an almost biblical style, which explains the history of Massachusetts, ñA Paraphrase of the Eighth Idyl of Theocrates,î a parody of the Idylls of Theocritus, and a satirical account of ñThe Miracle, translated from the German.î In addition to these pieces, the Broad Brim has a section for ñNotices,î and one for ñConundrums,î which act as a combination joke column/want ad/lost and found notice board.

Intrigued by this paper, I attempted to do some research on the matter, and mostly failed to find any verifiable information. I could not find anything about the Boston Broad Brim, or about the so-called ñWhittier Association.î As such, I now open myself to wild speculation. The ñBoston Broad Brimî has been attributed by a past archivist as belonging to George A. Barton, and though I havenÍt been able to verify this, it seems plausible that he may have been a contributor or at least a reader of the ñBoston Broad Brim.î George Aaron Barton (1859-1942) was originally from Quebec, Canada, and was educated at Haverford College, where he was the editor of the Haverfordian, and from which he graduated in 1882. From 1884-1889, Barton taught at Friends School in Providence, R.I., and received his PH. D. from Harvard in 1891. He later went on to teach at Haverford College (1891-1895) and at Bryn Mawr College (1904-1920). It is possible then that Barton may have been involved with the Broad Brim while working on his Ph.D. at Harvard. BartonÍs involvement with the Haverfordian is telling-- the Haverfordian was initially conceived as a literary magazine composed of student submissions, and was often satirical in nature. His connection to the Philadelphia area is also important, as Volume 1 of the Broad Brim includes ñThe Philadelphia Broad BrimÍs Greeting to its Boston Namesake.î

Additionally, you may have noticed that certain words from ñThe Editorialî are capitalized and underlined for no apparent reason. It is my theory that these are the names of the other contributors/creators of the Broad Brim--Woods, Nutter, Holder, and Gould. Of course, if this is true, then I would wonder why BartonÍs name is not included. However, if he was just a reader or supporter of the Broad Brim, then his name would not have been included in the coded editorial.

During my wild speculation and conspiracy style theorizing about the ñBoston Broad Brim,î I tossed out the idea of a Quaker secret society at Harvard to Mary, our Curator of Quaker Collections. Though she could neither confirm nor deny the existence of such a society, she did say she believed the Boston Broad Brim to be a product of ñan inside joke î among a group of Quaker friends. As our resident expert on the topic of Quakers and Quakerism, I take this statement to be accurate and based in factual evidence.