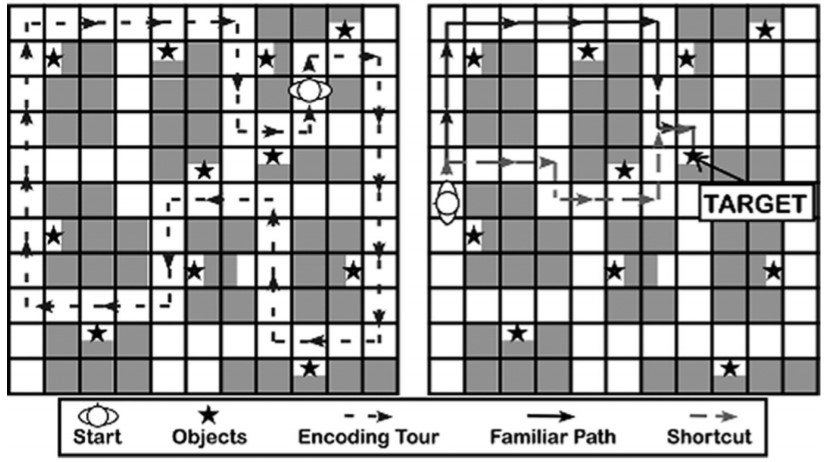 Over the summer I integrated my knowledge of both computer science and psychology, primarily through research that focused on the navigation abilities of children in virtual environments.

Hi! I’m Jacob Valero, class of 22’ and a computer science major with minors in psychology and neuroscience. This summer I worked at the Visual Perception and Spatial Cognition Laboratory at the University of Utah. The lab utilizes a multidisciplinary approach to research visual perception and spatial cognition, often by employing virtual and augmented reality. As the work of the lab is multidisciplinary, I employed what I had learned so far from both my psychology/neuroscience and computer science courses throughout the summer.

For example, I primarily used what I had learned in my psychology/neuroscience courses to conduct background research for an experiment that the lab was preparing to conduct. The experiment will be a variation on an experiment known as the Dual-Solutions Paradigm (DSP), which tests the individual differences in strategy people use to navigate between two previously seen points in a maze (Marchette, Bakker, & Shelton, 2011). The experiment has participants traverse a set path around a maze filled with landmarks, and then asks them to navigate between two of those landmarks. Interestingly, there is a significant sex difference when navigating between two landmarks, with males more likely to take shortcuts, and females more likely to retraverse the learned path or wander (Marchette, Backker, & Shelton, 2011). However, the original experiment, and variations since then, have primarily focused on the spatial abilities of adults. The variation the lab was aiming to conduct wanted to analyze the spatial differences in children to see if age made a difference in the results. There is reason to believe that there might be a difference with age, as many sex differences in spatial ability do not emerge until adolesence (Choi and Silverman, 2002). As such, I conducted background research on similar experiments that tested the navigation and spatial abilities of children to support a potential hypothesis.

Even though I had conducted literature reviews before, this was the most comprehensive literature review I have conducted, and it was incredibly interesting to take a deep dive with each paper I read and start to formulate hypotheses for how the DSP might play out with children instead of adults. The focus of my literature review was to identify the age group which should be used in the DSP variation, which ultimately concluded that the age range of eight to tweleve years old would be best, as sex differences in navigation and spatial ability emerge after adolesence, but research suggested that children below eight years old may be too young to complete the DSP.

I was also able to work on tasks which utilized what I had learned so far in my computer science courses. Before the start of the summer, I learned how to code in C# through Unity, a software which was developed for 3D and 2D game development, but is perfect for creating the interactive virtual experiments which the lab often conducts. Throughout the summer, I was able to make small tweaks to some experiments that were nearly finished by the time I started working in the lab, as well as test the initial iterations of the DSP variation task. It was really interesting to integrate my programming knowledge to add functionality to environments I had learned to build through Unity, which is something I had never done before in my computer science courses at Haverford. I was also able to use my programming knowledge to conduct an exploratory data analysis in Python using data analysis libraries I had used in my Introduction to Biometrics course. This was especially interesting as I was given a lot of freedom with the data analysis. All I was given was an experimental dataset and the details of the experiment, which informed the decisions I made when trying to look for patterns and potential connections between the variables. It was also exciting to use my knowledge of psychology to try to understand how certain variables might interact with others, and then use my programming knowledge to conduct a data analysis of those variables.

Overall, my summer experience was incredibly rewarding as I got to integrate two areas of study that usually do not interact with one another, but which I’m nevertheless incredibly interested in. I want to thank the KINSC for making this experience possible, even through the difficulties of the COVID-19 pandemic, and highly recommend other students to pursue research in the area or areas that they’re interested in through the KINSC summer scholars program!