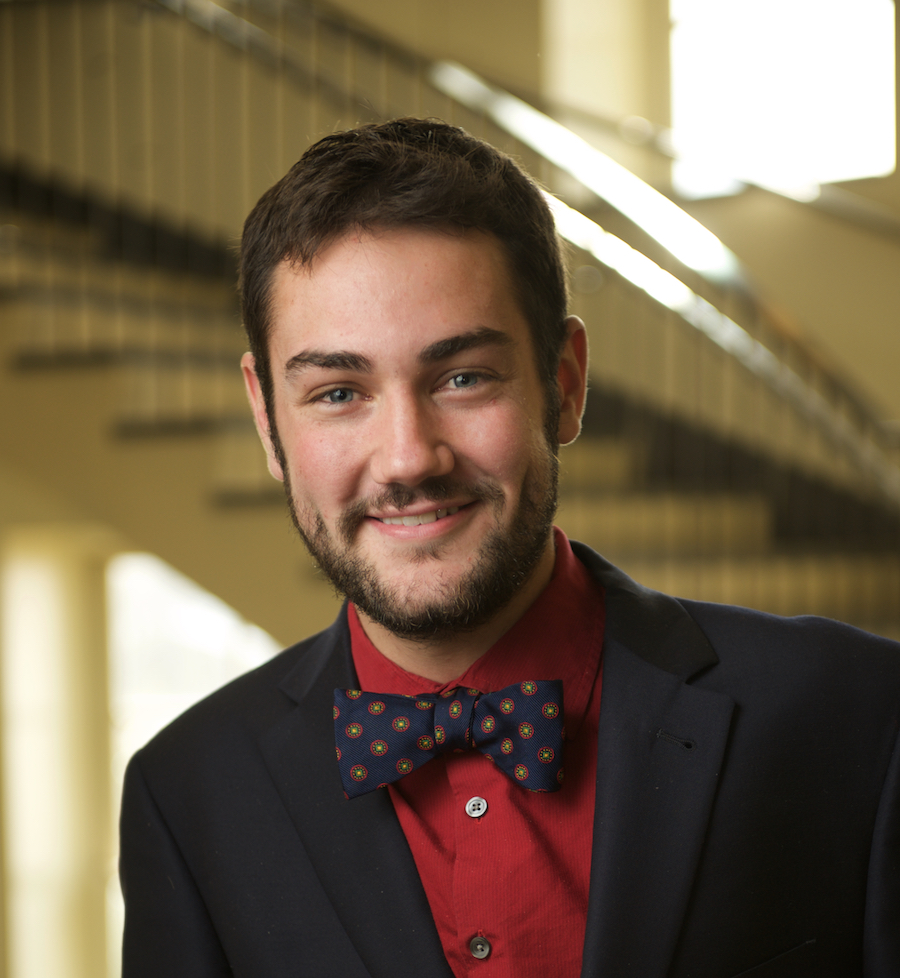 The major will graduate with a Mathematical Economics concentration and plans to eventually earn a Ph.D., with goals of a career in teaching and research.

Ian McGroarty’s ’17 mother worked at The Haverford School for boys, so he had some familiarity with Haverford College and the surrounding area.  He knew he wanted to attend a small college, so he visited the campus and it immediately “felt right”.

As a senior in high school Ian played the violin not only with Rowan University’s orchestra (near his hometown of Morristown, NJ), but also with Haverford College’s orchestra. He planned on majoring in music at college but he changed that to economics when he took Introduction to Economics with Professor Timothy Lambie-Hanson. Straight away he had fun with the discipline. He enjoyed doing the course work and he knew the possibilities of applying economics in an impactful way could be endless. Every economics course and faculty member in the department has shown him the possibilities and the power of the field. Professor Shannon Mudd’s course Microfinance: Theory, Practices and Challenges and Professor Carola Binder’s course Advanced Macroeconomics have been particularly provocative classes.

His thesis will explore the precursors of gentrification in urban environments. Specifically, it will investigate the flow of capital from good neighborhoods to bad neighborhoods in the same urban area. He predicts that the primary drivers of the transformation of neighborhoods will involve several key components; the employment landscape which brings new white collar workers to the area, the access to finance which enables redevelopment, and a proximity effect of the income inequality between nearby neighborhoods. Ultimately, the model would be able to predict the probability that a neighborhood will gentrify, and identify the characteristics of at-risk neighborhoods. Analyzing the relationship between these causal factors may enable policy makers to adjust their attitudes towards areas facing a gentrification risk.

Through the Microfinance Club, Ian played a key role in its ‘mapping’ project. The summer after his sophomore year he surveyed business development resources in the Greater Philadelphia area. By categorizing businesses and organizations, his final product was a comprehensive interactive networking device.

This past summer he worked at the Federal Reserve Bank of Philadelphia as an intern in RADAR, the Fed’s data warehouse. More specifically, he analyzed Home Equity Line of Credit (HELOC) activity, looking at patterns of behavior in people approaching defaults in their loans. The data shows that as people approach impending defaults on their loans, they take out more money against their line of credit.

In addition to an Economics Major, Ian will graduate with a Mathematical Economics Concentration. After graduation he plans to eventually earn a PhD in Economics, focusing on macroeconomics, with goals of a career path in teaching and research. In the meantime, he will work at the Federal Reserve gaining research experience.

Ian has been a Teaching Assistant in the economics department, a role he has found enriching and inspirational. He enjoys teaching, talking about, and explaining economics.