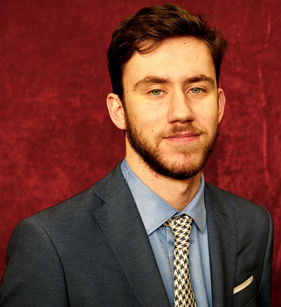 Til's thesis asks the question, does a player’s performance in the most recent NBA playoffs disproportionately impact his future wages?

In 2011, eleven-year-old Tilemachos Matkaris ’21 embarked on a three-week family trip to Philadelphia. It was a far distance to travel to attend the Sixers Basketball Camp held on Haverford’s campus. Born and raised in Patras, Greece, Til was excited to travel to the United States, meet new people and immerse himself in basketball – a memorable introduction to Haverford College.

Years later when looking at colleges, his field of study wasn’t clear, but he knew he wanted to attend a small liberal arts school with strong academics in the United States, preferably located on the East Coast to be close to extended family. He meticulously perused Haverford’s website and admissions material, and was impressed with the role students play in the day to day functioning of the institution. Haverford traditions and values such as Customs, Plenary, Community, Social Engagement, Student Governance, and the Honor Code caught his eye and captured his heart.

As Grexit was unfolding in 2015, Til’s interest in economics blossomed. He started to read about economics and was later able to take an introductory class on it in high school, which he loved. He was intrigued by the far-reaching applications of economics and with how it explains both world affairs and individual people’s everyday decisions.

After some deliberation in his first two years at Haverford, Til declared his major in Economics, and his fascination for the discipline only increased. As he progressed through the core curriculum, he found Professor Anne Preston’s Econometrics course difficult, but rewarding. The final project was challenging and demanding, but also very satisfying. In addition, Til was captivated by the concepts discussed in Professor Andrew Nutting’s Intermediate Microeconomics class at Bryn Mawr College, which influenced his decision to major in Economics. For his Junior Seminar, Til took Professor Anne Preston’s “Sports as an Economics Laboratory” class — a course that elicited the inspiration for his thesis topic.

His thesis aims “to explore the rationality of NBA executives when awarding NBA players new contracts.” More specifically, his thesis asks: “Does a player’s performance in the most recent NBA playoffs disproportionately impact his future wages? If NBA executives do put more emphasis on the playoffs, when making their free agency decisions, are they justified in doing so?” Til believes that answering these questions could be valuable “in the quest to shed light on the existence of irrationality and biases in industries that utilize performance-based pay. If it is shown that the NBA free agency market, a market where performance data is very extensive, readily available, and relatively easy for decision-makers to interpret, is actually suffering from irrationality, then that could be an indication that other performance-based pay markets with noisier data could also be suffering from similar inefficiencies.”

Last summer Til worked as a Research Assistant for Professor Anne Preston, cleaning, organizing and analyzing data for her ongoing project: “Migration Encounters”.  Working remotely, he did feel a bit disconnected, but the project was unique and it kept him busy and engaged. He got a glimpse into what it means to do research, what the overall process of a research project entails, and how long these types of enterprises take to come to fruition.

The summer following his Sophomore year, Til was awarded a Whitehead Internship. He worked in Fairfax Station, Virginia at MAXSA Innovations where he learned to be adaptable, moving from project to project. He analyzed sales and revenue data, created personalized sales goals to ensure company growth, and conducted market research for various products. He also spearheaded a project in product design and development and tried to revamp various business processes in order to streamline routine tasks and increase the efficiency of the company.

In addition to a Major in Economics, Til will matriculate with a Major in Mathematics from Bryn Mawr College. Post-graduation, Til is hoping to secure a Research Assistant position working with other economists, in a social and/or economic policy research firm. He has later plans of going to graduate school to continue his study of economics.

Til keeps busy within the Haverford community. He plays intramural basketball, is a co-captain of Haverford’s Flag Football Club, and served as a Board Member and Project Manager of Haverford’s Microfinance Club. He works in the Admissions Office, providing campus tours and hosting prospective students and their families. Last summer he was promoted to also be a Senior Interviewer in the office, conducting admission interviews with prospective students and helping to assess their fit with the college. One of Til’s passions is comedy. He has been able to explore that passion at Haverford as well, as he is a member of Haverford’s “Off the Spot” comedy group, the only sketch-only comedy group on campus, writing, editing, and performing comedy sketches in collaboration with the rest of the group.