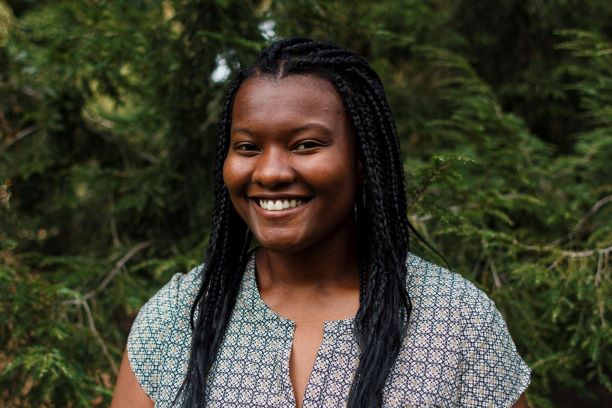 Unique Tuberville’s '20 thesis assesses the Community Reinvestment Act’s (CRA) impact on the supply of mortgage lending in low- and moderate-income (LMI) neighborhoods. The existing body of literature regarding this topic has generated mixed conclusions as to whether the CRA has effectively increased the access to credit in these LMI and minority areas that have historically been underserved.

Economics major Unique Tuberville ’20 brilliantly balanced academics while competing on two athletic teams: basketball and track and field. She thanks her Professors and Coaches who made it possible. They supported her along the way, providing accommodations to help her succeed in navigating her complex schedule.

Coming from a military family (her father served in the Air Force), she was born in Japan, soon after moved to Germany, and just a few years later moved to Warner Robins, Georgia where she grew up.

Through QuestBridge, a non-profit “that envisions a world where America's leadership encompasses thoughtful and broad-minded decision-makers drawn from every economic segment of society,” Unique learned about Haverford College. Questbridge arranged for her to spend a few days on campus, and she immediately fell in love with the campus. She liked the proximity to the city, and it was just far away enough, but not too far away, from home. Also, the Honor Code was a big draw for her because it echoed the same core values of her high school: Trust, Concern, and Respect. During her four years at Haverford she has “grown and found” herself. It has been the ideal college experience.

In high school, she took AP Macroeconomics, a course she profoundly enjoyed, which segued into wanting to pursue more business and economics related classes. She enjoys the mathematical component, as well as the practical applications, of economics.  She enrolled in Professor Anne Preston’s Intensive Introduction to Economics course, and later Professor Eric Gaus’ Money and Banking class, topics that solidified her decision to major in economics. Currently, she is enrolled in Professor Carola Binder’s Advanced Macroeconomics class, a very challenging and interesting curriculum.

Unique’s thesis “assesses the Community Reinvestment Act’s (CRA) impact on the supply of mortgage lending in low- and moderate-income (LMI) neighborhoods. The existing body of literature regarding this topic has generated mixed conclusions as to whether the CRA has effectively increased the access to credit in these LMI and minority areas that have historically been underserved. A few of the questions she aims to answer include: Did amendments to the CRA influence changes in lending patterns in LMI and minority neighborhoods? In the months leading up to a CRA compliance examination, are financial institutions more likely to lend to CRA target areas? She predicts that financial institutions do in fact alter their lending patterns upon amendments being enacted, and that financial institutions are more likely to lend to CRA target areas in the months leading up to a CRA exam. Both of her hypotheses are predicated on the assumption that financial institutions want to receive the optimal CRA rating (“outstanding”) during examinations. The better the CRA rating, the better the perception of the financial institution’s ability to best serve the credit needs of the areas in which they are located. The better the perceived efforts, the more consumers institutions attract, which enables them to stay in business and operate.”

Summer jobs have enriched Unique’s education. The summer following her sophomore year she worked for a Certified Public Accountant in her hometown. At WOT Group, Inc. she prepared financial statements, analyzed and generated budgets, and gleaned experience expediting insurance policies.

This past summer Unique worked in Atlanta, GA interning at Federal Deposit Insurance Corporation as a Financial Management Scholar. She was responsible for assessing the robustness of financial institutions and their dealings with banks, ensuring safe and sound practices. She learned about FDIC rules and regulations, working alongside employees to implement better training strategies for new hires. Post-graduation, Unique will be returning to FDIC full-time, employed in their Risk Management Supervision division working as a Financial Institution Specialist. Congratulations Unique!

In addition to a major in Economics, Unique will graduate with a Minor in Global Asia Studies, an “interdisciplinary...minor for students who are majoring in other fields but are interested in consolidating their study of Asia or its diasporas from a variety of perspectives” through the Bi-College department of East Asian Languages and Cultures. She has been a participant and leader in the Haverford College Black Students’ League, the Womxn in Economics Club, Redefine Her Street (a proponent of women in business), and a Network Member of QuestBridge.