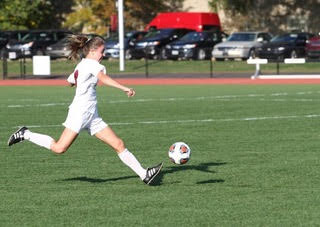 For her thesis, Maryanna Solecki '19 plans to find the effect of major sporting events on sex crimes.

For economics major Maryanna Solecki ’19, staying on the East Coast, attending a small liberal arts school, and playing soccer were earmark characteristics for any college she considered. Haverford College’s close proximity to her home town of Ambler, PA made the selection process that much easier.

During Fall break of her Junior year in high school, Maryanna and her father visited the campus, took a tour, watched a soccer game and sat in on a Perspectives in Biology class. During her visit soccer Coach Schneck reached out to Maryanna inviting her to participate in an overnight visit with the girls’ soccer team. The over-night with the team solidified her decision to commit to Haverford.

As strong in numbers as she is, majoring in mathematics wasn’t the path she wanted to take. Maryanna has a penchant and talent for working with data. It was important to her that she major in a subject that uses real-world applications, and economics fulfilled her aspirations.

Environmental Economics with Professor David Ross at Bryn Mawr, and Sports as an Economics Laboratory with Professor Anne Preston at Haverford, have been particularly impactful courses.  Although she didn’t take economics courses spring semester of her junior year while in Prague, Czech Republic, she did immerse herself in language, religion, politics and anthropology courses. She also traveled to multiple cities, including Paris, Berlin, Munich, Kraków, Poland, London and Budapest.

As co-captain of the women’s soccer team, Maryanna has played attacking center midfielder for the team since her freshman year. She is also co-chief operating officer for Redefine Her Street, a campus organization run by women for women, aimed at “creat(ing) a better community and network for women who want to explore finance and consulting”.

Bolstering her skills as an economist, Maryanna has enriched her curriculum with summer internship experiences.  The summer following her sophomore year she worked in the marketing sector of PIDC, Philadelphia Industrial Development Corporation.  The organization’s “mission is to spur investment, support business growth, and foster developments that create jobs, revitalize neighborhoods, and drive growth to every corner of Philadelphia”. Primarily involved in the planning and organization of their 60th Anniversary gala, she also reached out to clients and did features and profiles on customers.

Last summer she worked in Merck’s Upper Gwynedd, Pennsylvania office, delegated to their Global Human Health division. Maryanna collaborated with the integrated account management planning team putting her data analysis skills to use.  She constructed and developed a data set that accounting directors and their sales team have adopted with positive results. She also developed a dashboard Oracle survey that account managers are currently using.

For her thesis topic, she plans to find the effect of major sporting events on sex crimes. She is looking to analyze data on different sex crimes reported (human trafficking, rape, domestic violence) at the daily level in the host and participating cities of the World Series, NBA Finals, Super Bowl and the Stanley Cup over a period of time. She hypothesizes that these mega sporting events lead to an increase in sex crimes.

Post-graduation she would like to continue her work in the health care industry, ideally working at Merck, doing market analysis and brand management.