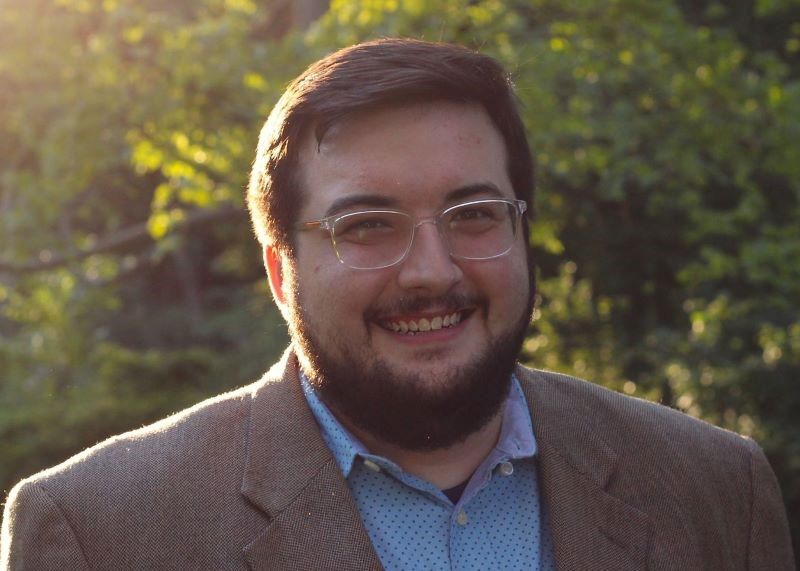 For his thesis, Gabe has constructed a modified version of the canonical Prisoner's Dilemma game.

Although Gabe Sekeres ’22 is from Cleveland, Ohio, he’s been no stranger to the Philadelphia area.  Both of his parents went to the University of Pennsylvania.

During one of his college-visit road trips, Gabe’s mother spontaneously proposed swinging by Haverford College.  As first impressions go, it was love at first sight!  Haverford was everything he was looking for. The size of the student body, the student-faculty ratio, and a strong sense of community.  As a follow-up to his initial introduction to Haverford, Gabe later participated in a more formal prospective student visit. While on a campus tour, Professor of economics, David Owens, walked over and informally engaged with the tour group. Later that day he sat in on Professor Giri Parameswaran’s Introduction to Economics with Calculus class, furthering his fondness for the Economics Department. Gabe continues to be impressed with how approachable, friendly and open the faculty at Haverford are.

Gabe’s high school history teacher ignited his gravitation toward Political Science. His plan was to major in Political Science, with a Minor in Economics.  However, things changed after he took ECON201, Analytical Methods for Economics with Professor Parameswaran. Political questions were pondered, and quantitative skills were applied and expanded upon. Recognizing the complement of the two disciplines, Gabe declared a major in Economics, and added a Mathematics major at Bryn Mawr College to his degree.

His thesis applies the Prisoner’s Dilemma game. In his words, “In the 1950s, a number of electrical companies participated in a price-fixing cartel with an interesting form -- depending on the day a government contract was released, a certain company would get priority and would propose a high price for their services, and all the other companies would propose an even higher bid, so as to ensure the company with priority was paid more than would be expected in equilibrium for their products. This cartel fell apart, and federal indictments followed, but it had a unique form, one that has not been studied. To do so, I have constructed a modified version of the canonical Prisoner's Dilemma game, and will be performing an experiment to test the effect of communication on the stability of equilibrium in this game. To do so will hopefully shed light on how these companies formed their cartel and reveal something of the conditions required to prevent similar from occurring, as well as provide experimental evidence for a game that has gone unstudied in the literature.”

Summer internships have supplemented Gabe’s coursework. The summer after his sophomore year Gabe was employed as a Research Assistant for Giri. During the fully remote COVID19 summer of 2020, he co-authored, with Giri and fellow research assistant and economics major, Haya Goldblatt '22, a paper titled Your Ignorance is My Bliss: Misinformed Voters and the Politics of the Slippery Slope. Gabe also researched publications in the field of policy feedback in order to write literature reviews, and he conducted distribution analyses on one of Giri’s models. It was a challenging and rewarding few months of work.

This past summer Gabe interned at MKThink, a San Francisco based architecture consulting firm.  MKThink is centered on the concept of creating “spatial intelligence” to improve quality of life. Gabe delved into projects that included evaluating learning environments in K-12 schools in the Hawaii Department of Education, creating policies on transitioning to a hybrid work place at the University of Maryland, and conducting a cost-benefit analysis of transforming California schoolyards into greenspaces.  Gabe is thrilled to have contributed to meaningful projects that advance honorable endeavors. It was an extremely rewarding summer experience.

During his time at Haverford, Gabe has worked in the IITS department as a ProDesk employee assisting faculty, staff and students with technological issues. He’s been members of the Microfinance Club, the Haverford Satire Magazine and the Badminton Club. He also serves as Co-Head of the Off the Spot Sketch Comedy group. And, he has recently been volunteering as an advisor to the Economics Research Club, bringing to the forefront econometrics techniques and research projects.

Gabe aims to work for 2 years as a research assistant, ideally with the Federal Reserve. His long term plan is to get a Doctorate and join the world of academia. Classes that Gabe took with Professors Giri Parameswaran and Carola Binder are the impetus for pursuing a career in higher education. He looks forward to further exploring economics’ broad applications and multidisciplinary nature.