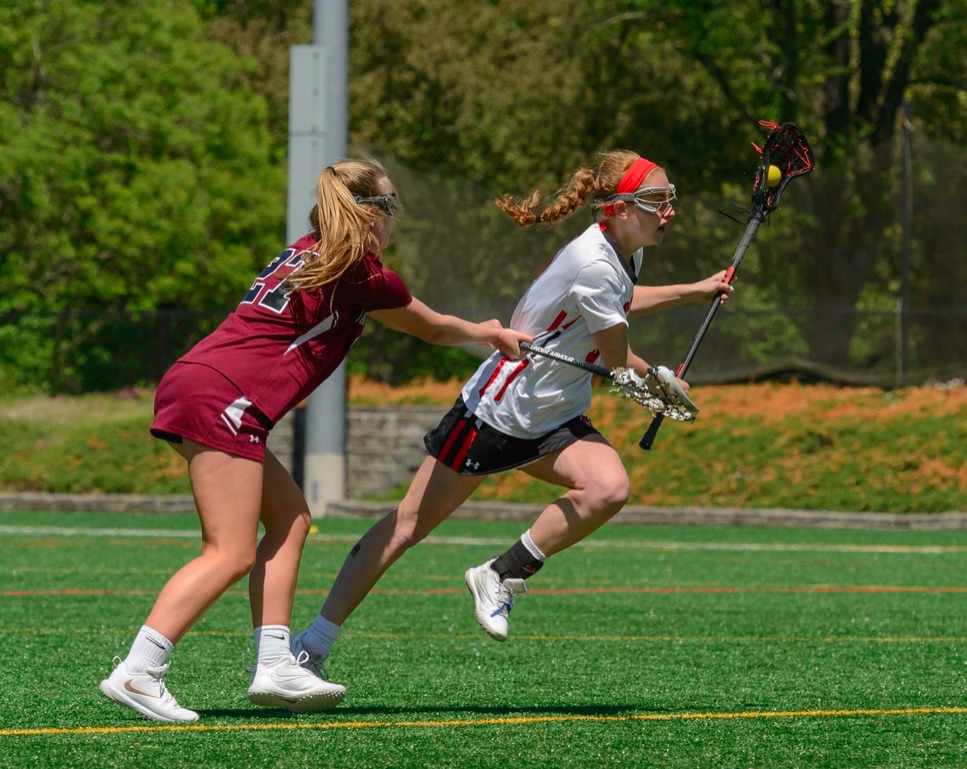 Eliza Brosgol's '20 thesis will examine the ways in which American constituents vote disadvantageously, with a specific focus on women and immigrants.

In the process of choosing a college, Economics major Eliza Brosgol ’20 was searching for a school where she could be both academically challenged and play lacrosse. After doing an overnight visit with the lacrosse team, it did not take her long to commit to Haverford. She loved the players, the campus, and the classes that she visited.

Eliza has been a midfielder since she started playing lacrosse in second grade. She enjoys being a part of the 30-person Haverford team and says that it has been an exciting and fulfilling experience. Eliza also loves that the sport serves as an outlet for other sources of stress in her life.

In her junior year of high school, Eliza wrote a paper for her U.S. history class on the Federal Reserve Act of 1913. In order to write the paper, Eliza performed research that was rooted in economics. During the course of the assignment, Eliza also had several conversations with her father (who majored in economics) and realized that she was quite interested in the subject. It was for this reason that Eliza decided to take Introduction to Economics with Professor Saleha Jilani during her first semester at Haverford. After taking this class along with Health Economics, taught by Professor Julie Becher, she was primed to declare a major in economics. As a sophomore, Eliza wasn’t sure what career path she’d pursue post-graduation, but she recognized that economics is a major that opens doors and enables many career options.

Eliza will also matriculate with a minor in French. She has been studying French since seventh grade. Eliza took her first Haverford French course as a means of completing the college’s minor requirement. She enjoyed the experience and decided that it was something that she would continue. Eliza appreciated the way that taking both French and economics courses each semester provided her with a balanced workload, mixed with readings, essays, problem sets, and exams.

Summer internships and a junior semester abroad have enriched Eliza’s college experience. The fall semester of her junior year she attended the Danish Institute of Study Abroad in Copenhagen. Among a variety of classes, she took sports economics and the economics of European globalization. During her time in Europe, she had the opportunity to visit Brussels and Paris. This was an exciting part of her abroad experience, as it allowed Eliza to practice her French speaking skills. Eliza says that her favorite part of her abroad experience was bonding with her host family. She remains very close to them, with plans of returning to Copenhagen to visit.

The summer after her freshman year, Eliza commuted from her hometown of Scarsdale, NY into Manhattan. Eliza worked as a Legal Intern for Phillips Nizer, LLP. She researched and summarized depositions, drafted affidavits and reviewed meeting minutes. It was a valuable experience for Eliza because she was able to see what it was like to work at a law firm.

The following summer Eliza worked in Manhattan once again. She was a Constituent Affairs intern for New York Senator Kirsten Gillibrand. After her interest was peaked during the Health Economics course she took during her sophomore year, Eliza wanted to see how the U.S. healthcare system worked from a government perspective. Her work included advocating on behalf of constituents for cases that involved the Social Security Administration, the Center for Medicare and Medicaid, and FEMA. She oversaw and secured positive outcomes for 50 cases brought to the Senator’s office.

Last summer she was awarded a Whitehead Internship and worked for the Health Care Improvement Foundation.  After her exposure to the Danish healthcare system while abroad and her internship with Senator Gillibrand, she was excited about the prospect of further exploration of the healthcare industry in the United States.  Commuting daily from Haverford’s campus to center city Philadelphia, she researched opioid practices, generated surveys, analyzed questionnaire results, and distributed reports. She also authored an article about HCIF’s success and future direction of its partner organizations.

In the words of Eliza, “there is little research that has examined individuals who vote against their interests. While it is understood that people prioritize issues differently when casting their ballots, [Eliza’s] thesis will examine the ways in which American constituents vote disadvantageously, with a specific focus on women and immigrants. Disadvantageous voting behavior is defined in this context as voters who elect representatives that they know will not enact policies in their favor on at least one particular type of issue. For example, it would be considered disadvantageous voting behavior for an individual on welfare to vote for a representative that is against the expansion of Medicaid. It would also be considered disadvantageous voting behavior for an individual in a top tax bracket to vote for an official that he or she knows will enact a wealth tax. [Eliza’s] research seeks to determine the characteristics of voters that cast ballots for candidates that disservice them and the important contextual parameters that are shared among these voters.”

Contributing to the Haverford community during her four years on campus has also been important to Eliza. She served as a Customs Person during her sophomore year, an experience she relishes because she met people she may not have otherwise. She has also served on the Strength and Conditioning Advisory Committee, on the HaverHealth Committee, and as a Peer tutor.

Eliza has accepted a healthcare consulting position with New York City based IQVIA, a firm that is committed to “creative solutions to improve human health” by using human data science.  She expects to consult on policy work in the healthcare industry. Congratulations Eliza!