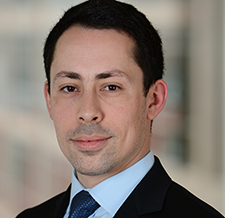 I chose to major in East Asian Studies for several reasons. First, my social studies courses before college tended to focus on U.S. and European history. By the time I reached Haverford, there was a gap in my knowledge of Asian history, culture, and politics that I wanted to fill. Second, I had always wanted to travel abroad to Asia and Haverford's study-abroad requirements for China and Japan require at least a year of language courses. Third, my father is half-Filipino. I heard stories about his upbringing in the Philippines as a child and developed a keen interest in my Asian heritage.

After Haverford, I taught English in Chiba, Japan for a year and then worked in international affairs at a Washington, DC think tank before attending law school. I graduated from law school in 2012 and am currently in my second year at DLA Piper, an international law firm. I work in financial regulatory law, advising banks, non-depository lenders, and other financial services providers. Lately, I have even had the chance to work on developing issues in virtual currency law.

My coursework in East Asian Studies and time spent abroad in Japan provided me with invaluable experience in adapting to new cultures and situations and working together with people from different backgrounds. In addition, the rigorous coursework and cross-disciplinary studies that the major offers, by combining courses in economics, politics, history, and language have been extremely helpful in my work first in international affairs and now in law.

I credit Paul Smith in particular, and his sophomore seminar, as one of the most important parts of my Haverford experience. Working with Professor Smith improved my writing skills significantly, and the final paper for his seminar class was an important lesson in research that helped prepare me for the challenges of law school and a legal career.

I would encourage anyone interested in pursuing a degree in history, politics, economics, or other social sciences to consider pursuing a major or minor in East Asian Studies. In the future, if not already, East Asia will be the most important region in the world. Economics and international affairs will, more and more, be shaped by events in Asia. Anyone hoping to have a career in business, politics, or international affairs would be doing themselves a disservice if they came out of undergrad without some knowledge of the region.

For those already considering the major, my primary advice is to work as hard as you can on your language skills and get the most out of your study abroad experience. If you can pick up an Asian language in college and reach conversational, or better yet, business proficiency, you will be exponentially more valuable to employers. As for studying abroad, don't slack off, but don't forget that the most important lessons you learn will be outside the classroom. Get to know the city you live in. Explore the country. Above all, spend the majority of your time with non-U.S. folks, otherwise, you might as well stay home.